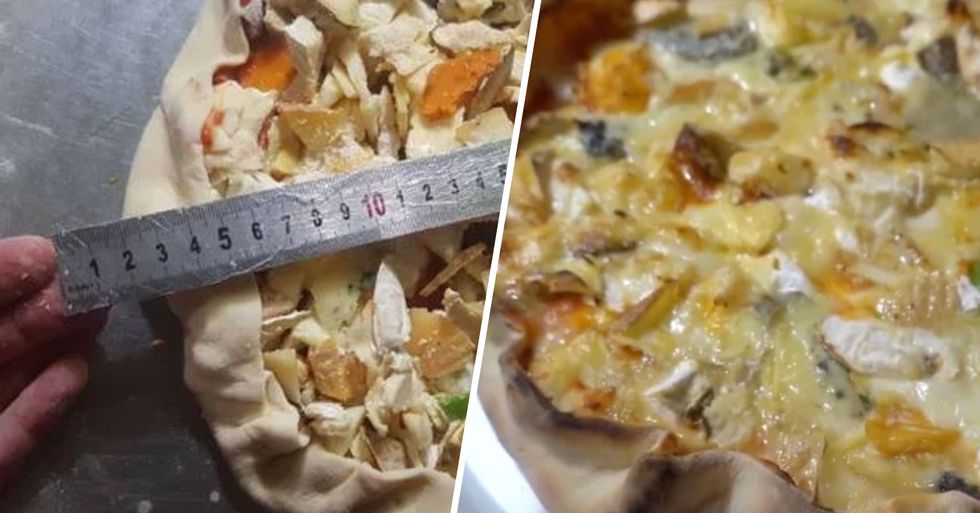 If you're into trying weird and wonderful foods, best believe the fast food industry is there to cater to you. But one of the most loved foods is without a doubt the classic pizza.

One man, however, has taken his pizza obsession to new levels by creating a record-breaking pizza...

Keep scrolling to watch the clip of the shocking process.

But there's definitely one fast food that reigns supreme.

It's a true classic.

From Domino's to Pizza Hut, nothing beats a good old pizza.

But one man has taken his pizza obsession to the next level.

A restaurateur in France has managed to create a record-breaking pizza.

What makes it special?

It's topped with 257 different varieties of cheese. We didn't even think that many types of cheese existed. Keep scrolling to watch the clip...

It's any cheese fanatic's dream...

Benedict Bruel, the manager of Déliss' Pizza in Lyon, crafted the cheesy offering on Saturday 22 February, with the intention of breaking a record.

Benedict describes his home nation as the "country of cheese."

So, he thought it was only right to absolutely obliterate the record.

Benedict made sure he did his research to ensure his pizza complied with the Guinness World Records requirements. "The pizza had to be thirty centimeters wide and there should be at least two to four grams of different cheeses," he explained.

But it wasn't easy to get his hands on so much cheese...

"People laughed when I went to the checkout several times with about 60 cheeses," he said.

He racked up a hefty buck too.

But it seems his efforts well and truly paid off...

Because he did just that - smashing the record previously held by Johnny Di Francesco, who made a pizza with 154 different types of cheese in 2018.

There's so much cheese on the pizza that you can't even see the tomato cause anymore.

"I told myself that we, the French, with our country of cheese, we could easily put 100 more... We couldn't even see the tomato sauce anymore."

It took more than 2 hours to make the pizza.

"He said: "[With] the time to unpack the cheeses and shape the dough, the making of the pizza lasted almost two hours and 20 minutes. Unsurprisingly, Benedict explained that a small slice is enough... "People think it's sickening, but it's not. It is a pizza made for several people, a small piece is enough to appreciate. For the aperitif, it's perfect." Interested in more junk food news? Keep scrolling to check out why Burger King's french fry sandwich is stirring up controversy...