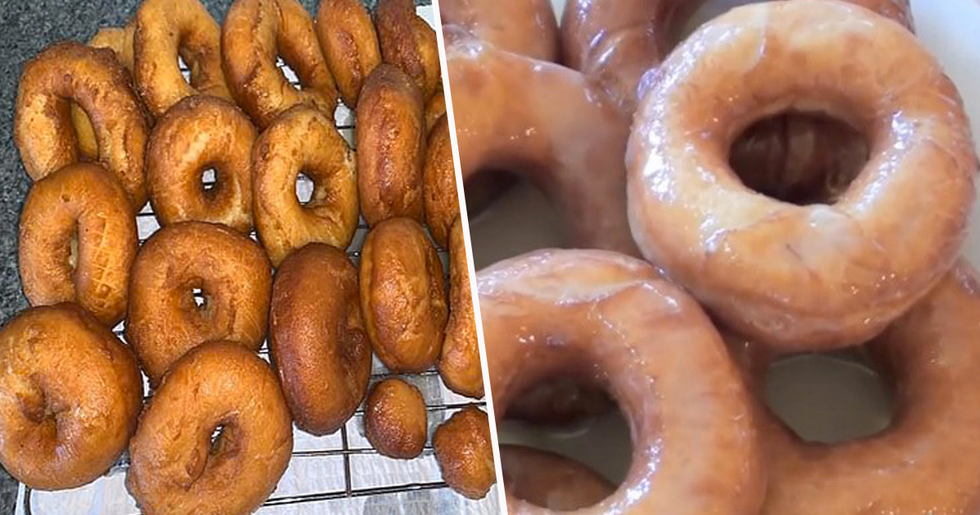 A YouTube chef has cured our quarantine woes with an incredibly simple recipe for home-made Krispy Kreme doughnuts.

Krispy Kreme doughnuts? Made at home? It sounds ludicrous, I know, but this chef is pretty confident that he's recreated the real deal.

Keep scrolling to watch his recipe video, and to give the doughnuts a go for yourself...

The world is currently in lockdown.

While we remain in self-isolation within our homes, our schools have closed, shops have shut, and bars and restaurants have all closed their doors indefinitely.

And, as one of the many consequences of this...

Millions of us have been unable to get our hands on our favorite fast food.

Our beloved fast-food restaurants have closed their doors indefinitely...

Meaning that our own cooking will have to do in the meantime. What kind of living hell is this?

Many people have been attempting to recreate these delicious menus at home...

But it hasn't been going amazingly well, to say the least.

Though we have been putting a tremendous amount of effort into recreating our favorite greasy dishes...

They just aren't the same as the real thing.

Well, one man has now come to the rescue.

Rob Nixon, from Australia, runs the YouTube channel, Nicko's Kitchen, where he posts videos demonstrating how to make a variety of recipes and well-known treats at home.

Rob has recreated many fast-food favorites in the past...

But his most recent challenge?

As a nation, we love our doughnuts...

So, luckily for us, Rob decided to recreate the iconic Krispy Kreme glazed doughnut at home... And his finished product is remarkably like the original.

He shared a video of his recipe and method onto his channel...

Which has now had over 3 million views from Krispy Kreme fans from all over the world. Keep scrolling to see the recipe and his video for yourself...

The first step Rob took to create his homemade Krispy Kremes was to get 600ml of milk and a large knob of butter, which are then warmed up in the microwave until the butter has fully melted. So far, so good, right?

Once the mixture has melted, Rob adds a couple more ingredients.

He throws in a little bit of salt and a "small amount of sugar", before giving it a thorough mix and then allowing to cool for around ten minutes.

Rob then transfers the cooled mixture into a fresh bowl...

And goes on to add a sachet of dried yeast, some ground nutmeg, more sugar, and whisked eggs.

He gives the mixture a thorough whisk...

Before gradually adding a large quantity of flour.

It now resembles a "sticky dough."

The mixture is then covered with a towel and left for around an hour, which will give the yeast time to properly "rise" the dough.

And, once the mixture has risen, Rob gets to work.

He sprinkles flour on his work surface and kneads his dough before rolling it out around 2cm thick with a rolling pin.

And then comes the all-important doughnut shapes.

He uses a large cookie cutter to cut the initial shape, and a smaller one to make the circular hole in the center. It's all been rather easy so far, hasn't it?

It's time to deep fry the doughnuts - Rob boils a large pan of oil and, very carefully, lowers in his raw doughnuts to fry for 2-3 minutes.

He reminds his followers to only fry a couple of doughnuts at a time...

And to only remove once they've gone a "nice and golden brown color." He then removes them and lets them drain on a couple of sheets of paper towels.

And, while his fresh doughnuts cool...

Nicko cracks on with the glaze, which he makes using icing sugar, a little bit of salt, water, and vanilla extract.

He then fully submerges the cooled doughnuts into the glaze...

And ensures that they are fully coated, before placing them on a plate.

Nicko presents his finished doughnuts which, can I just say, look completely incredible.

If you feel that you're up for the challenge, you can see Rob's full recipe video here.

Happy baking! For more on the fruitful efforts of home cooking, keep scrolling to read about the guy who recreated KFC chicken at home, and how the company spectacularly roasted people's hilarious attempts...