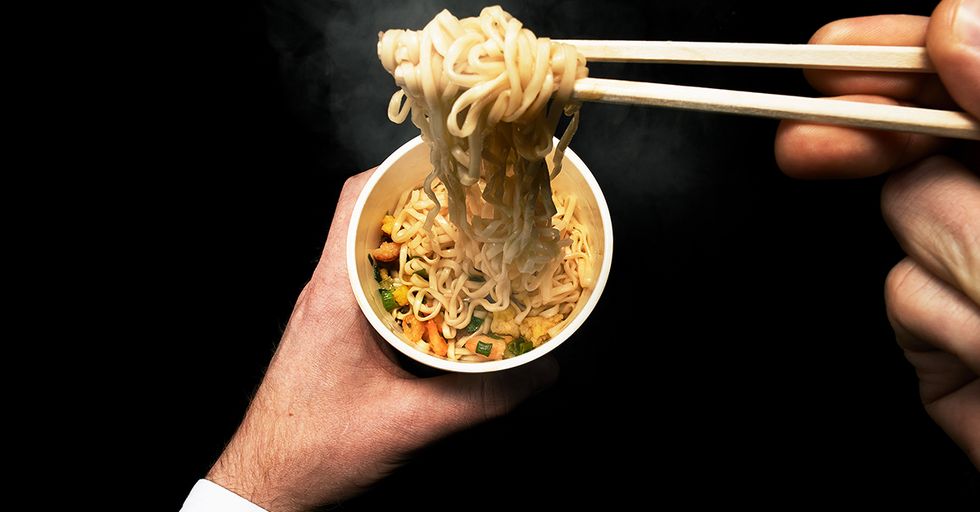 Everybody's gotta eat, but chefs have the benefit of actually knowing how to cook amazing food.

Even when they're drunk.

Maybe even *especially* when they're drunk.

A recent AskReddit thread asked chefs what they make for themselves to eat while they're drunk. There were thousands of replies. You better grab a pen and some paper. You're gonna wanna write these down.

You can never have too much parmesan.

Store-bought tortellini, preferably Italian ham with a mega spicy tomato sauce and more parmesan than anybody should eat in one sitting. I mean like a half pound of parmesan. I love parmesan. –Jesters420

I tried to make spaghetti. Passed out. The water boiled out. The noodles turned into a large lump of coal. Smoke all through the house. Smoke detectors blasting. Pan ruined. –ThatGuy__YouKnow

Hate to disappoint, but: Instant noodles with an egg. –Whoneedsyou

Stoner Nachos. Chips, shredded cheese. And whatever else you can come up with after out of the microwave. –Titofish There's one ingredient that made an appearance more than anything else. Any guesses? Read on to find out.

Put an egg on it!

Almost always something with eggs. Soaks up the booze way better than just bread. I'd say the most common dish for me is a potato and egg burrito with cheese. –[deleted user]
I got super f**ked up one night and made breakfast fajitas with eggs, and instead of chorizo I used Tennessee pride sausage and seasoned it with cumin, black pepper, and garlic powder. The sh*t was so good now all the kids want me to come home drunk and make extra, so they have leftovers in the morning. –BadAndy911

Let's take a trip to Flavortown.

Personally, as a chef, the best thing I do is take some eggs and whip em till they are super frothy, then just like Guy Fieri, I go to Flavortown. Chorizo, veggies, seasoning. Then I pour it into a small circular oven pan and bake it like a quiche. Nothing quite like drunk eggs. –Kinkaypandaz

I do a bastardization of a pasta special I ran once. Original was torn pieces of fresh sheets of pasta, pancetta, onion, red wine vinegar, and oil. I do that late at night but add ranch and crushed red pepper and use sh*tty bacon and sautee onions in the fat and it's an unambiguous improvement. And I keep a lot of the bacon fat, so it's like a warm bacon onion ranch vinaigrette. –Overunderrated

Mac and cheese and everything else!

Mac and Cheese with about 15 extra ingredients. Sautéed onions, meat (sausage is good, but I have some leftover flank steak calling to me), real cheese (I've been eyeballing the last quarter of Camembert in the fridge), hot sauce (chipotle Tabasco is a godsend), etc. Ain't no one too classy for drunk AF Mac and cheese. –Saarlak Have you ever tried a ramlette? After reading this next recipe, you're going to want to.

The ramlette. Take a pack of ramen and cook the noodles. While they're cooking, whisk together two eggs and the seasoning packet (you'll have a devil of a time getting it to whisk in but it will). In a nonstick skillet, melt ~1 tbsp butter and give the noodles a quick saute. Pour egg mixture over the noodles and let cook without stirring for a minute or two while you top with shredded cheese. Throw the skillet under the broiler until the cheese browns. The egg underneath will have cooked. It's a ramen omelette. A ramlette. (Well, technically a frittata but the name rattata is already taken). Whatever you call it, the result is heavenly. –whomikehidden

I crave eggs when I drink for some reason. I love eggs, and they're easy, so that's probably why. Usually, I end up either making a frittata with whatever leftovers I have, or I'll make hash and fry a runny egg or two over the top. A few weeks ago I got pretty tipsy and had leftover hollandaise (I use mustard in mine) and plain pulled pork, and so my brain decided I needed to make "Cuban sandwich eggs Benedict" which was pretty amazing. I tried making it sober, and it was just as good. –notasugarbabybutok

Hey, it could be worse!

Not a chef, but I'm a baker. When I'm drunk, I always make some new bread recipe that I think is gonna be so great but then I wake up and every single time it's just sourdough with a bunch of fresh rosemary in it and a buttery crust. I mean, it's really good, but it isn't new or different. –Zouea

Drunk fries, if you're still relatively coherent to operate a burner. Pan fry thinly sliced potatoes. Drown them in shredded cheese. Lid on, let the cheese melt. Plate. Cover in salsa, jalepeños, and sour cream, and whatever the hell you want. They're your drunk home fries. Ground beef and sausage are amazing on them, too. –gotnomemory

Anybody else suddenly feeling jealous of a dog?

I'll make my dog some simple chicken and rice with a small bowl of homemade low-fat ice cream for her dessert. About the size of a shot glass. Then I keep drinking, and I'll make myself some non-fat popcorn and pitch some at her. She likes catching it. –distressed_asset I'm pretty sure this next recipe was sent from heaven.

Everything about this sounds amazing.

I call it the Putellarito: Toast a flour tortilla, spread crunchy peanut butter and Nutella on it. Add some whole peanuts if I have them and a sliced banana if I'm trying to impress a drunk chick. Roll it like a burrito. Takes 45 seconds and it's like eating a baby angel. –Clammymango

It's a classic for a reason.

BLT, baby! Cooked bacon, duh, and bread fried in the fat. Sliced tomatoes with a pinch of salt on them to extract the moisture, makes for extra tomato flavor. Shredded lettuce, watch those not so nimble fingers! Hope you have some garlic mayo leftover, compile and stuff in face! –Surtock

I once had an overwhelming craving for box Mac N Cheese. That sh*t is something that I don't crave or eat. Ever. My friend wanted grilled cheese. Being the brilliant drunk chef, I decided that making box Mac N Cheese then putting it in the center of the grilled cheese sounded like a most fantastic idea. Turned out it was!!! Holy sh*t that was good. I have never again eaten it but often have the desire to. Then I think to myself...would it really be that good...sober? YES! –GonzoGirl5

Bringing a waffle maker into the mix.

For something sweet, I butter two slices of bread. Slice some banana, add honey and cream and put it in a waffle maker — butter side facing out. Crispy outside, sweet banana mush in the middle. –Mumbling_Mute

Last time I was in my cooking state of drunk I made my roommate and me eggs, sausage, bacon, hash browns, biscuits with gravy, and to top it off I made something I called boozy pancakes. He said I mixed a few alcohols together with pancake mix, pecans, and chocolate chips. He said they were the best pancakes he had ever had. And he was sober. The alcohol I had in the kitchen that night was Jameson, Peach Schnapps, four Budweisers, Grey Goose, a couple random tequilas, and absinthe. I still don't know the right recipe. I've been trying for the better part of two years. –Futuramafryday Share these recipes with your favorite person to cook with — drunk or sober!