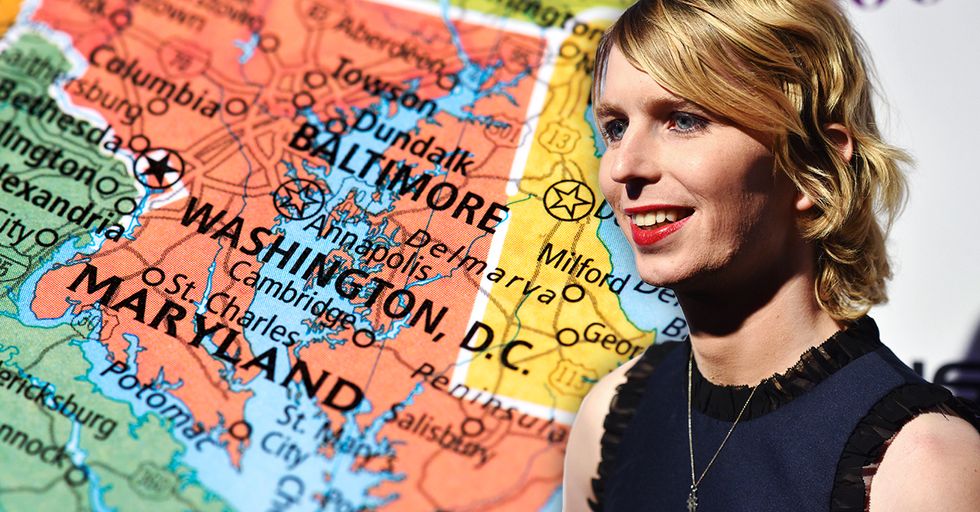 Chelsea Manning is a controversial figure, to say the least. The transgender activist and former soldier rose to prominence in 2010, when she was found guilty of leaking classified documents to WikiLeaks and sentenced to 35 years in prison — by far the longest punishment imposed in the U.S. for a leak conviction.

On the day she was convicted, Chelsea came out as transgender. “I take full and complete responsibility for my decision to disclose these materials to the public. I have never made any excuses for what I did,” Manning wrote at the time. “The bottom-line is this: I need help and I am still not getting it. I am living through a cycle of anxiety, anger, hopelessness, loss, and depression. I cannot focus. I cannot sleep. I attempted to take my own life.”

Manning served seven years, but then, after more than 117,000 people signed a petition asking Barack Obama to cut Manning’s sentence short, the rest of her sentence was commuted by Obama in 2017.

Now, she's running for a seat in the U.S. Senate.

On January 11, Chelsea Manning officially filed to run for a U.S. Senate seat in Maryland.

She's going to be running as a Democrat. Her opponent is incumbent Senator Ben Cardin, also a Democrat. He's held the Senate seat since 2006 and is running for his third term in 2018 against Manning.

Manning announced her campaign on the morning of Twitter on Sunday, January 14.

"Yup, we're running for senate," she tweeted, complete with sunglasses, rainbow, and heart emojis. "#WeGotThis" seems to be the rallying cry of her campaign.

The tweet accompanied a link to her first campaign ad, which you can watch in its entirety here:

"We live in trying times. Times of fear, of suppression, hate," Manning narrates over disturbing video of the white supremacist rally in Charlottesville, Virginia. "We don't need more or better leaders," she continues. "We need someone willing to fight."

As you can probably imagine, the responses to the news of a Chelsea Manning Senate run have been quite...varied.

Many are rooting for her — she is obviously a passionate figure who wants to truly transform how our leaders lead and frankly, she also wants to change who our leaders are. Her ad showed how many of our current Senators, even on the Democratic side, still meet with Donald Trump.

Still, Chelsea Manning has her detractors.

@xychelsea You're completely unqualified to be a US Senator. You have no experience in government, law or economics.
— LeftDial (@LeftDial)1515936607.0

This person might have a point, but "no experience in government, law, or economics" didn't stop our current president from reaching the highest office in the nation. It seems the traditional avenues by which people end up in government positions have become kind of moot. But that's not where the reactions end...

It's unfair to many that Chelsea Manning has sort of been billed to us as this traitor of the American people.

What she really did was expose a horrendous act perpetrated by our very own military. Yet she's the one who's consistently been punished. She leaked the information, she didn't kill innocent people.

This is truly a case where instead of not shooting the messenger, we vilified her and seemed to forget that what she leaked was the true crime.

Many on Twitter pointed this out — as you can imagine, there was no shortage of messages that said things like, "She's a traitor! She doesn't belong in the Senate!"

Listen. Chelsea Manning didn't leak those documents just because she loves leaking things. In an ABC News interview, Manning said she leaked those documents because she has a "responsibility to the public." Despite the harm that was sure to come to her, she wanted to make sure the truth got out there. In what world is that not laudable?

Of course, there were disgusting Internet trolls who disparaged Manning based on transgender identity. While this person sort of tried to leave Manning's gender identity out of the equation, he still thinks of her as a traitor.

There's no need to use pronouns to attack Chelsea Manning, you're just burying the lede! I'm more than happy to sa… https://t.co/dj4G3WPErt
— Eddie Zipperer (@Eddie Zipperer)1516027270.0

"Unleashing" her on society is some strong language, don't you think? It's not like she got out of prison and immediately started committing more crimes. Instead, she's trying to better our government. That's more than a lot of people can say for themselves.

Still, she was convicted of violating the Espionage Act.

Should this prohibit her from campaigning (or being elected) to the U.S. Senate? Or can we look past the charges against her to see what she was really trying to accomplish with her brave act?