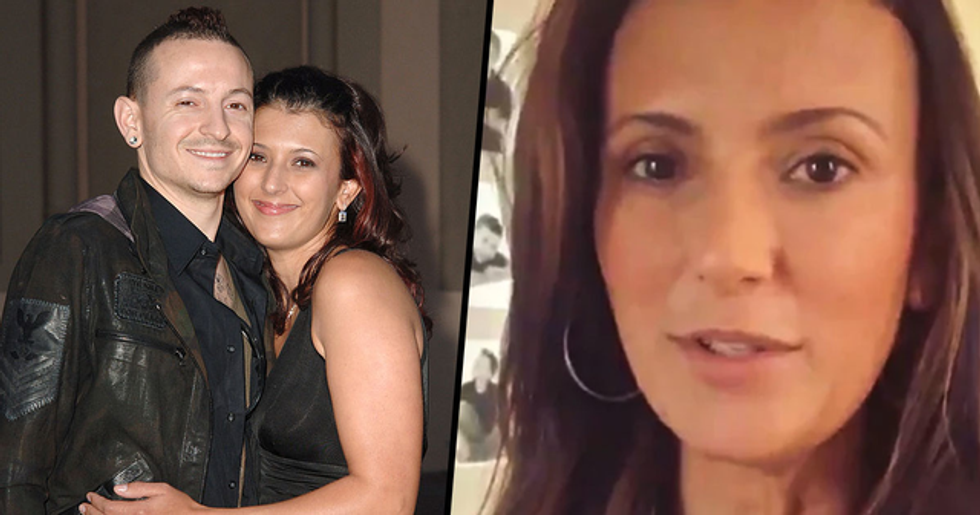 2 years on from Chester Bennington's heartbreaking suicide, his widow, Talinda Ann Bennington, has announced that she has found love again and is engaged to be married.

Talinda, who has become a mental health advocate since her husband's death, announced her happy news on her social media accounts alongside a heartwarming message about Chester's long-living legacy.

Keep scrolling to hear more about her announcement and to read her emotional tribute to her late husband.

Chester and Talinda Bennington were married for eleven years.

First meeting through a mutual friend back in 2004, the couple instantly hit it off and were quick to tie the knot just 1 year after their first date.

They've had 3 children together.

They have 1 son, Tyler, and twin daughters, Lily and Lila. Chester also had 3 other children from previous relationships, who see Talinda as their step-mom.

However, behind the smiles for the cameras...

Chester was secretly fighting a long and dark battle with depression. Bennington, who was the front-man for rock band, Linkin Park, had a long history with alcohol and drug abuse but had been sober for the 6 months leading up to his death.

Chester didn't have an easy life.

Bennington’s troubles go back to his nightmarish childhood. From the time that Chester was 8 until he was thirteen, he was sexually abused by an older male friend. “I was getting beaten up and being forced to do things I didn’t want to do," he once said in a candid interview about his troubles. “It destroyed my self-confidence." The experience led Bennington to experiment with drugs and alcohol. By his teens, he had used opium, amphetamines, marijuana, and cocaine.

He spent years battling his demons.

But he was always incredibly candid about his issues and was open and honest about his depression and substance abuse in interviews. "I have a hard time with life… sometimes. Sometimes it's great, but a lot of times for me, it's really hard." He once explained in an interview with IHeartRadio, "And no matter how I'm feeling, I always find myself struggling with certain patterns of behavior… I find myself stuck in the same thing that keeps repeating over and over again."

And, in 2017, Chester tragically took his own life.

On July 20th, 2017, Chester's body was found in his Palos Verdes Estates home in Los Angeles County by his housekeeper. He was only forty-one years old.

The world was both shocked and heartbroken by the news.

Because Chester had seemed so happy in the months leading up to his suicide. Linkin Park’s new album, One More Light, had topped the charts when it was released a few months earlier, and his single, "Heavy," was doing well on rock radio. In addition to the Linkin Park tour, he was planning a reunion with his pre-fame grunge band, Grey Daze, for September.

And Talinda was none-the-wiser.

Chester had seemed in great spirits on their family vacation just days before his death. His newly-widowed wife shared the tragic photo on her Twitter page, which showed her and their family laughing and smiling as they enjoyed time together. She captioned the powerful image: "This was days b4 my husband took his own life. Suicidal thoughts were there, but you’d never know. #f**kdepression."

She has been very open about the death of her husband.

Appearing at the Canadian Event Safety Summit to discuss mental health last year, Talinda spoke about the events that led to Bennington’s death and how others can seek help. “My husband had had a past… in the past, he had attempted suicide, but I thought to myself, ‘It was ’cause he was wasted. He was this or that,’" said Talinda. “So [before] he did pass, I thought very naïvely, we were in the clear."

And, despite his brief relapse into alcohol a few months earlier...

She still had no inkling that Chester would commit suicide.

She has spoken about their final days together.

Talinda revealed: “He was very excited to be promoting the new album and doing stuff, so he was happy. He gave me a kiss goodbye, he gave the kids a kiss goodbye, and I never saw him again."

Talinda admitted to her struggles in the months following her husband's suicide.

In a podcast titled Life After Suicide, Talinda opened about her husband’s death, discussing everything from his state of mind to how she and their children were coping. Talinda recalls spending the days following her husband’s suicide lying on the floor of their home, crying so much that she “couldn’t breathe."

But, since his death, Talinda has become a mental health advocate.

She now spends her time speaking out about at various events about mental health in the battle against depression and suicide. However, she still gets people blaming her for her husband's death. “As much as social media has been a huge support for me, I do every now and then get people blaming me — straight-up blaming me — for him dying, for not saving him, for mistreating him," she admitted. “Who knows why these people behind their devices are saying these horribly cruel things to me? But, you know, it is a little stab in the heart, but what I have to remember is that it’s not my fault, it’s not my children’s fault, it’s not the band’s fault — it’s nobody’s fault."

She has partnered up with several mental health organizations.

And she subsequently launched the 320 Change Direction campaign, an initiative to change the culture surrounding mental health, mental illness, and wellness. The campaign aims to educate people on the 5 signs of emotional suffering, so people can help prevent their loved ones from hurting themselves or taking their own lives.

And, during her tireless campaign work...

Talinda is now engaged to be married.

Talinda made her announcement on her Instagram page over the weekend, where she announced that she and her "angel on earth, Michael. F." are now engaged.

Though the identity of her new fiancee hasn't been revealed...

Talinda seems to be madly in love, and she reminded everyone that "the death of a soul mate does not mean the death of you".

She explains how she will always love her first husband.

"Your heart expands with love. It doesn’t shrink or push out those that have already taken root. I will always love my husband, Chester. And I will keep honoring him by living MY life. A life of love and happiness. Because that’s what he would want for me."

However, Talinda had to take to Twitter to defend herself.

Because some internet trolls insisted that she got engaged in November 0f 2017, just months after Chester's death. Talinda sent out a tweet to her 219,000 followers. "I absolutely did NOT get engaged in Nov of 2017!!! Please stop listening to someone who no longer knows me or MY family and is desperately trying to stay relevant."

Though Talinda and her family deserve nothing but happiness.

After the trauma of losing Chester, the Benningtons have endured 2 years of Hell. To hear that Talinda has found love again shows us that, no matter how horrific the loss of a loved one can be, it doesn't have to be the end of you.