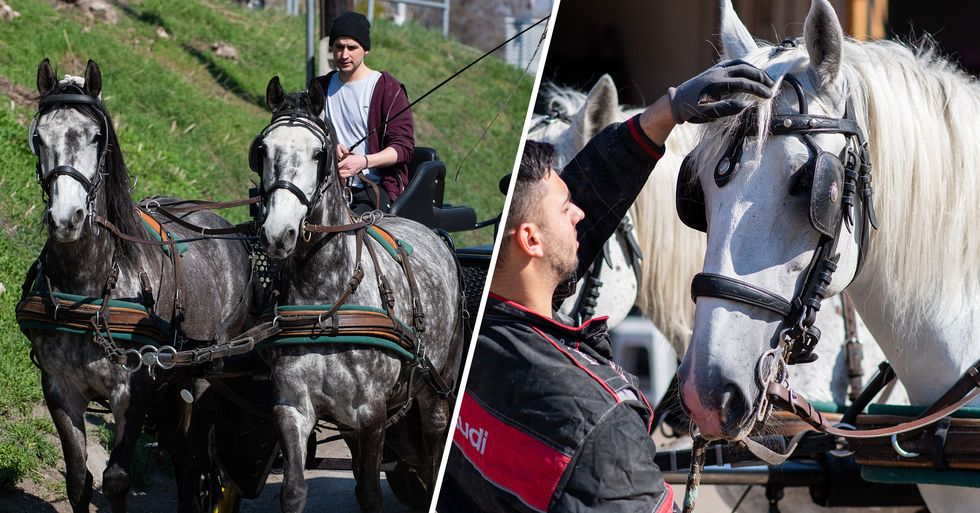 The news has just come in that Chicago will be permanently banning horse-drawn carriages from 2021.

Keep scrolling to read about this historical move in animal rights...

Us humans have a long history of working with animals.

Animals began working with humans for agricultural purposes, with dogs being one of the first working animals with our hunter-gatherer ancestors.

Once trained, we can get animals to work numerous jobs in our aid. For instance, dogs have been domestically trained for years to assist in the emergency services, and horses have been trained to help transport people and to race.

But the matter of using working animals today causes a lot of controversy...

Animals being used for the entertainment and convenience of humans is often protested against...

With thanks to the work of PETA, practices such as using animals in circuses, using horses and donkeys to pull carriages full of people, and allowing individuals to sit on their backs and ride them, have been criticized heavily and bans have even been put in place. For instance, many circuses have now prohibited the use of live animals in their performances.

But some working animals date back for centuries.

It is unknown as to when exactly horses became domesticated, but the clearest evidence of the earliest use of a horse as a means of transport is from chariot burials dated to c. 2000 BCE.

Horses were our main method of transport before automobiles were invented...

Many have argued that forcing horses to pull carriages is cruel and inhumane.

There have been countless incidents in the past of horses becoming physically exhausted from pulling carriages, especially when they are full of people. Horses have been known to collapse to the floor out of exhaustion, and they don't get regular breaks for food and water.

NYCLASS and PETA have protested against this very practice...

NYCLASS (standing for New Yorkers for Clean, Livable and Safe Streets) is an animal rights organization that fights for the ethical treatment and rights of all animals. They have partnered up with PETA in the past to protest the usage of horses for human convenience, especially in crowded cities such as New York.

But, despite all of the protesting...

Horses are still subjected to the streets every day to carry out their unfortunate duties of pulling heavy carriages full of excited tourists over and over again.

This is no life for a horse...

And sadly, so many of these beautiful animals live their lives in exhaustion.

And they're a very popular tourist attraction.

A series of videos emerged last year of horses collapsing in New York after pulling carriages for hours on end...

And if these don't prove that horse-drawn carriages need to be stopped, then we don't know what will.

But it seems that action is finally about to be taken.

News has just come in that the Chicago City Council will be banned horse-drawn carriages in the city beginning next year.

The city’s existing 10 horse-drawn carriage licenses will expire at the end of the year and will not be renewed.

The council passed an ordinance Friday in a 46-4 vote ending the horse-drawn carriages after December 31st, 2020, The Chicago Tribune reported.

Of course, PETA are overjoyed with this news.

"This is a banner day for overworked horses in Chicago, who will no longer be forced to pound the pavement through extreme heat, thunderstorms, or blizzards and who are often deprived of even a drink of water, as the Chicago Alliance for Animals has documented for over three years," PETA President Ingrid Newkirk said in a statement, according to ABC.

Of course, not everyone is happy with this decision.

Owner of Chicago Horse and Carriage, Larry Ortega, dismissed that the industry is a form of animal cruelty. "Even though there are city, state and federal laws clearly stating what is animal cruelty, there has never been one horse driver or owner arrested operating on the city streets of Chicago," he previously said in a statement to ABC.

There is no denying that pulling a carriage is bad for a horse's health...

And these animals deserve so much better.

However, many locals feel that the ban is a bad move.

@nytimes So now what? People permanently lose their jobs, can’t afford the animals they cared for and those animals… https://t.co/9NMJhFfHYZ
— Rebekah Bradford (@Rebekah Bradford)1587896755.0

As fair as this question is...

The issue of an animal's health needs to be prioritized and it is unfair to continue a potentially cruel practice.

This is a huge step forward in the name of animal rights...

And we hope to see much more movement for the care of horses in the future. To keep reading about animal rights, keep scrolling to learn about why PETA wants to ban the word "pet"...