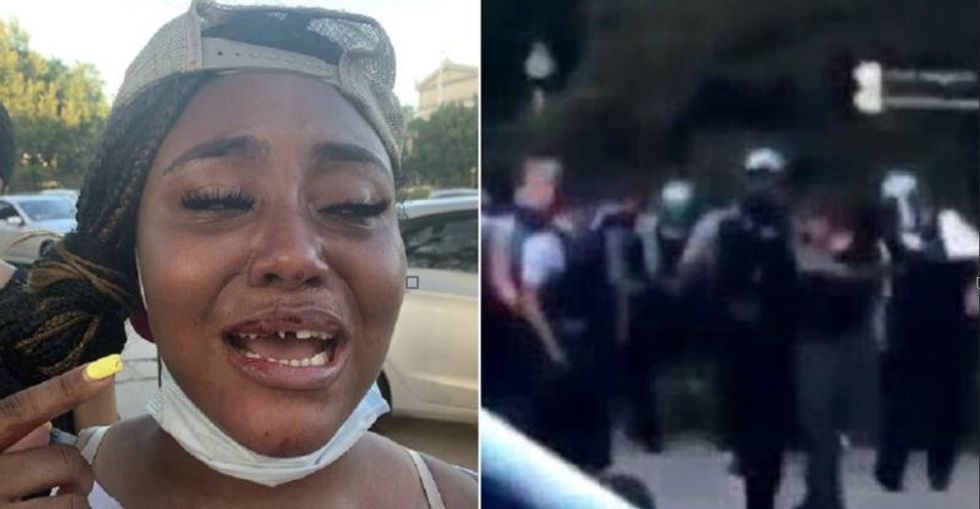 Chicago Police Knock Out Teeth of Black Activist at Protest

As protests continue to rage on across the country, some protesters have taken it upon themselves to re-arrange the furniture in their local areas, starting with all the "racist statues."

In Chicago recently - at a protest over a Colombus statue, something very dark happened.

A cop punched a protester.

And the protester, whose name is Miracle, had many of her teeth knocked out.

A GoFundMe has been set up.

This is 18yo Miracle Boyd, whose front teeth were knocked out by CPD last night, at the Love March Against Gun Viol… https://t.co/P56LILfs0z
— Stephanie Kollmann (@Stephanie Kollmann)1595076446.0

To help pay for Miracle's medical and dental bills following the savage attack.

According to the GoFundMe:

In the process of Miracle attempting to deescalate, video captures an as of now unidentified officer knock Miracle’s phone away & throw a left punch that struck Miracle in her face Miracle clearly injured & stunned, then runs away from this officer & his fellow officers that failed to stop this attack & hold this officer accountable.

My tooth was knocked out. I have lip abrasions in my mouth. My teeth hurt really bad. A police officer came up to me and he smacked my phone out of my hand and it hit me in the mouth and my tooth got knocked out.

Here are some of the pictures uploaded to Twitter:

The George Washington statue in the Hollywood District of NE Portland is the latest one to be vandalized. The statu… https://t.co/XdkplJqecu
— Eric Patterson (@Eric Patterson)1592569232.0

And The Oregonian also obtained this snapshot:

The statue, which was situated in front of Jefferson High School and across the bottom of the base, you can see the words "slave owner" written across it. No arrests have been made yet. Keep scrolling to see why these celebrities were called out because of their reaction to the BLM movement...