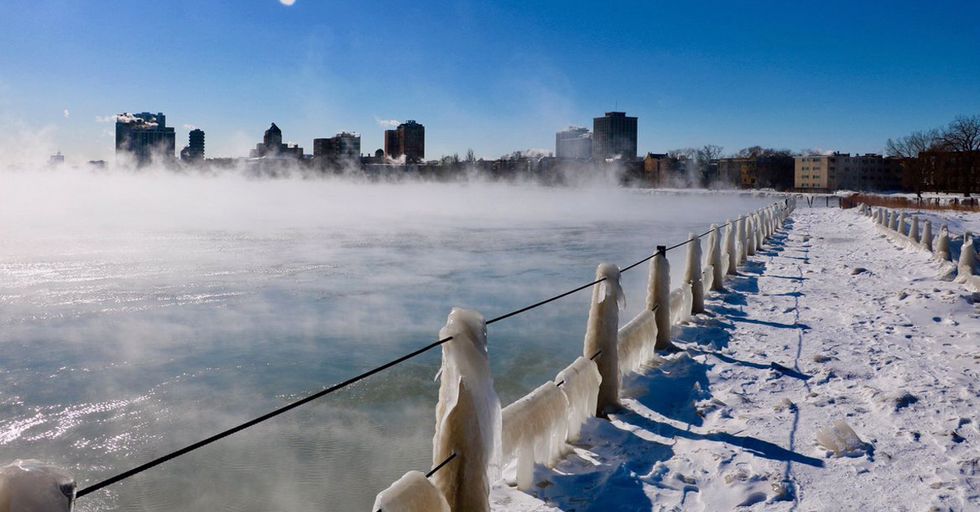 Remember over the summer when everyone couldn’t wait until it got cold so they could start dressing? Hot summer days spent longing for cozy winter nights are now a distant memory for Midwesterners suffering record low temperatures in a snowy polar vortex.

The cold spell over Chicago – nicknamed "Chiberia" as a portmanteau of the state and its new temperature twin Siberia – has shut down schools, buses, businesses, planes, trains, automobiles, and even the postal service, whose slogan promises timely delivery in “rain, sleet or snow.” But desperate times call for extreme measures, and the polar vortex has effectively halted all activity across the region.

While most Chicago residents are trying to stay warm and make the most of the snow days, the state’s homeless population is facing acute risk as temps continue to drop well below freezing. To ensure the safety and comfort of as many Chicago residents as possible, medical officials and local businesses are working together to provide shelter for the duration of the cold front.

We’re pretty deep in the winter months, and the frigid air that envelops you outside your cozy cinnamon bun of a bed is starting to get a little old.

But it’s really cold in Chicago.

Temperatures have plunged to 21 degrees below zero, nearing the record low of 27 degrees set in 1985.

With added wind chill, the city is experiencing -51 degree weather.

To put that in perspective, it only takes a wind chill of 25 degrees below zero to freeze skin in 15 minutes according to the National Weather Service.

Apparently, the cold front is a result of unexpected warming over the North Pole.

Sudden heat from Morocco was misdirected toward the pole, which caused temperatures to rapidly increase.

Its resultant pieces are now making themselves at home in Chicago and creating extreme subzero temperatures across the midwest region.

People are calling the vortex "Chiberia."

It was 1 degree when I took these pics. Chicago is expected to be colder than Antarctica and Siberia this week.… https://t.co/tZeS2qWKKM
— megan riley (@megan riley)1548779754.0

Because Chicago is actually colder than Siberia right now.

Chicago Mayor Rahm Emanuel has announced the weather conditions as a public-health risk.

“They are life-threatening conditions and temperatures," the mayor said.

Governors across Illinois, Michigan, and Wisconsin have declared a state of emergency.

Cities throughout the region have been virtually shut down, with most public and private services have been closed as a result of the extreme weather.

Public transportation was hampered by the polar vortex cold.

The Chicago Transit Authority, the city's primary mode of transportation for 1.6 million riders, was delayed and in some places completely halted this week.

Flights and trains have been canceled too.

Chicago O’Hare International Airport was forced to cancel over 1,000 flights, and Amtrak trips in and out of the city were suspended.

Even the U.S. Postal Service had to stop deliveries.

And delivery in any kind of weather is, like, their thing.

Look at this amazing #sunrise over #lakeMichican and the #Chicago skyline on a historically cold day. #Chiberia… https://t.co/E3jskTieUx
— Jonathan Petramala (@Jonathan Petramala)1548855371.0

Although, tourist traffic would probably be slow this week anyway.

Schools and most businesses are temporarily out of commission.

While some are braving the freezing temps, residents have been advised to stay home for some Netflix and windchill.

Unfortunately, homes aren’t really all that warm either.

The chill is absolutely pervasive, and following people inside.

People are sharing the most insane photos from Chiberia 2019.

This is a straight-up horror movie.

Not even a nice, hot shower is safe.

When the steam is freezing, you know it’s bad.

But frozen steam is the least of it.

Boiling water is freezing on impact in the subzero temps.

Don’t go outside with wet hair.

Or really at all if you can help it.

Or you’ll need to thaw out all your delicates.

Some are trying to make the most of it.

With a water gun that would make Mr. Freeze proud.

Others are trying everything to stay warm.

Insulation has never been so cute.

Pet owners are taking extra care with their furbabies.

Pets should absolutely be inside until temperatures rise.

And everyone is dressing in layers.

Remember that wind chill factor? Conditions are severe out there.

While some are finding ways to get through the dreadful weather, the situation is grave for many.

Unfortunately, the impact of the polar vortex has already become deadly.

Power is down across the state of Illinois.

Indianapolis Power & Light is working to reinstate service for the 36,000 currently braving the weather without power.

They’re urging local residents to stay indoors as much as possible.

Unfortunately, staying inside a home isn’t an option for some.

The city is working to provide shelter and care for its homeless population by converting buses into makeshift warming centers staffed with nurses.

The rideshare company Lyft is lending a hand too.

The company is providing free rides to warming centers. Many headed to these centers may not have access to a smartphone, and locals are being encouraged to support those in need by offering a ride through their own app.

Officials are urging those with resources to step up during this emergency.

Checking up on older neighbors and donating to shelters can make a world of difference.

Hopefully, it won’t be long before the city sees sunny days again.

If you've had enough of feeling numb after being outside for just two minutes, we have good news! Temperatures are… https://t.co/Vzntt8BDBJ
— NWS Twin Cities (@NWS Twin Cities)1548846916.0

In the meantime stay warm Chiberia, and help others wherever you can.