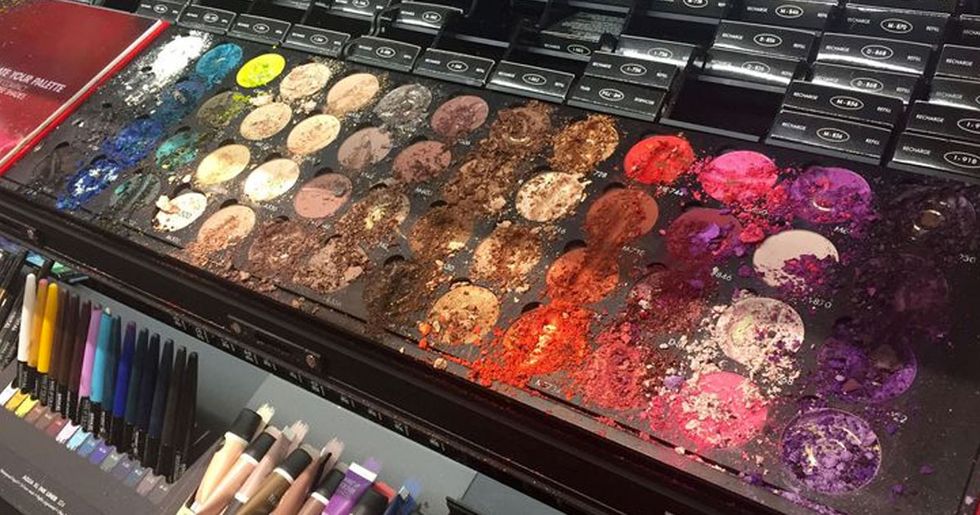 Child Destroys $1,000 Worth of Make-Up at Sephora

Kids do the damnedest things. Sometimes they eat things they’ve found on the floor, occasionally they’ll tread mud all over the carpet, and every now and again, they destroy over one-thousand dollars worth of top-of-the-range make-up products.

Recently, a mother snapped a picture of a Sephora make-up aisle that looks like it'd been attacked by a wandering fleet of racoons, but, as it turned out, it was actually the chaos left behind after a disgruntled child got his or her hands on it.

People are shouting for better parent supervision in department stores. But we think this is all really quite funny; Sephora is a multi-billion dollar corporation with a slightly shady past - so have at it kid!

We'll talk you through what happened and treat you to a brief top-four list of our favorite moments of infant mischief.

Sephora is a cosmetics store with many outlets across the globe; it's currently valued at thirty-seven billion dollars!

They sell everything beauty-related, from perfumes to foundations.

In case you don't know what they're about, here's a Sephora commercial.

Anyone else suddenly tempted to go online shopping?

Their branding is on point.

We would recognize those black and white stripes from a mile away!

And its not just for women!

There's plenty of choice for everyone.

Which is a merger of the fashion-houses Louis Vuitton and Moët Hennessy.

These guys are alleged tax evaders.

They were accused by an anti-corruption group of tax evasion via Frank-Gehry designed contemporary art museum, which went up in 2014.

See what we mean? Slightly shady.

They are trying to cut down on CO2, though.

Maybe trying to clean up their image a little...

But when it comes to animal testing...

Not so good. The website Cruelty-Free does not class them as cruelty-free, unfortunately.

The companies that are affiliated with Sephora that test their products on animals are:

Although there are plenty of brands at Sephora that don’t test on animals.

These include Anastasia Beverly Hills, Hourglass, Too Faced and Mark Jacobs.

So, here’s the story:

As makeup lovers entered the store, ready to test out their various favorite products, they were greeted by a tragic sight, something that makes our skin crawl...

Every Make Up Forever eye shadow tester on display was smashed.

Smashed. To smithereens. All of them.

Who could have done such a thing!?

Turns out, the culprit was actually a small child.

What would make anyone do something like that, though?

Maybe the kid was bored.

But who could be bored at a place with so many products to swatch?!

Or maybe they were just really excited...

We wouldn't blame them!

We don't even want to imagine what it really looked like!

And the estimated total cost of the damage:

And people are getting pretty up in arms about it.

One lady posted on social media, "Mammas, please shop for your makeup without your tiny humans."

But what are they supposed to do?

Look, none of us of enjoy having bored or frustrated children around, but we can tolerate it.

The disgruntled Sephora customer continued, 'I've needed to bring Allie into many makeup stores as she's grown and had a strict 'hands in pockets' rule for her and a strict 10-minute rule for me...It was very helpful, so if you must take your kiddos makeup shopping, I suggest trying it."

We think it's okay to bring children into cosmetic stores (especially when it’s a corporation with a slightly dubious past owned by a conglomerate that doesn’t pay its taxes), but we don't want to have to see a story like this again... it's too painful to see!

Kids often cause a lot of damage, though. Sometimes it can't be helped. We understand.

Let’s look at a few videos of children causing mischief and accept it as an inevitable course of life.

This child knocked over a one-hundred-thousand dollar statue!

This interruption on the BBC caused some damage too...

We're sure you’ve seen this before, but we still think it’s one of the greatest moments on television.

Then there was the time that child teleported on the news.

Okay, that one didn't cause any real damage, it's just funny.

And there was this nightmare plane ride!

This was on Fox News and, like most of Fox News, it looks like some kind of nightmare hellscape.