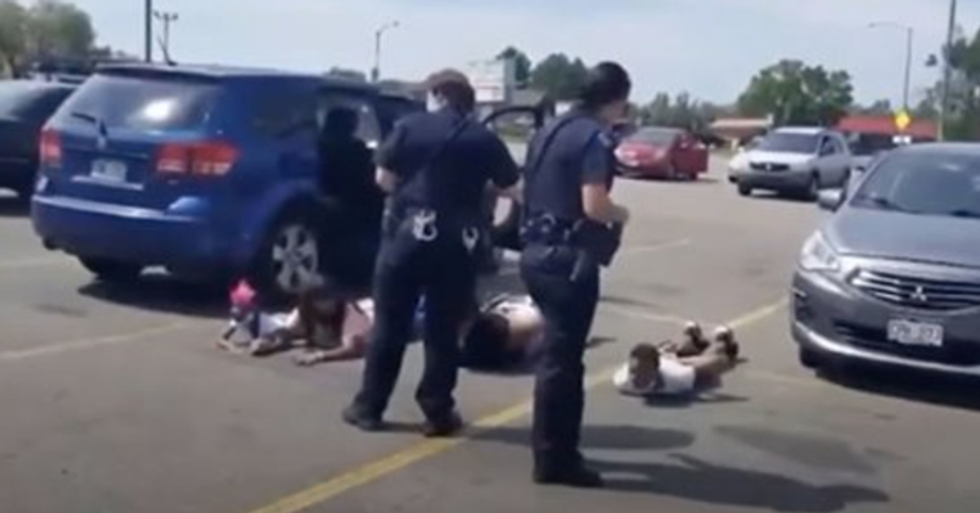 Children Aged 6, 12 and 14 Arrested Facedown in Handcuff by Cops

A black family was this week unlawfully detained and handcuffed on the floor this week, and the excuse for their horrifying arrest is utterly disgraceful...

But, sadly, there have been some instances of police officers continuing to spur on this message of hate.

I know, it's painfully ironic, isn't it?

Police brutality has been happening in this country for centuries now...

And black people have proven to be the more popular target for these disgraceful cops more than any other ethnic group.

So, amid all the awareness the BLM protests have raised regarding the issue...

You'd think that these police officers would have taken a step back to evaluate their actions, right?

Because, this week, yet another horrifying instance of racially-motivated police brutality has emerged.

This time, it happened in Denver.

Footage has been circulating online that shows cops pulling over a black family driving through the suburbs.

The family were stopped due to a suspected stolen car...

But, instead of simply check their IDs and having them on their way, the police officers on duty decided to detain the full family... Including their children.

The children involved were aged only 6, twelve, and fourteen...

But that didn't stop the officers from hauling them out of the vehicle, handcuffing them, and laying them on the ground, face-down.

And what we can see is nothing short of horrifying.

Throughout the footage, the children can be heard crying for help...

And, even more devastatingly so, one of the girls can be heard saying: "I want my mother."

Witnesses claim that, before the recording, the officers had drawn their guns when confronting the family.

The woman who filmed the incident, Jenni Wurtz-Bennett, told CBS Denver: "I went from seeing kids in a car to seeing a gun pointed at the kids in the car. I called my husband and said 'I don't know what I'm looking at,' and he said 'Hang up and start recording.'"

Eventually, the family was released without charge.

Police said that they were conducting a "high-risk stop" because of a suspected stolen vehicle - the family's car had the same license plate number, but was not registered to the state officers were looking for.

They have since issued an apology.

Their statement reads: "We first want to offer our apologies to the family involved in involving a police stop of their vehicle yesterday."

They went on to try and justify why exactly they had stopped and detained the family...

But finished by explaining that an internal investigation is currently underway.

But, for the family involved, this apology isn't enough.

If you’re not outraged, you aren’t paying attention. Note: the “stolen vehicle” they were looking for was a motor… https://t.co/iDg9XkXkiV
— Leslie Herod (@Leslie Herod)1596514330.0

Brittany Gilliam, one of the family members detained in the incident, told CBS Denver that she wants more than an apology.

"I want change. Better protocol, better procedures because the way you did it yesterday was not it." She went on to say how her children have been suffering since the arrest. "Those kids are not OK. They're never going to be okay. That was a traumatic experience. Would your kids be okay after that? Having a gun pulled on them and laid on the ground. Especially a 6-year-old."

When are things going to change? For more on the blatant racism in this country, keep scrolling to see the moment a black reporter was arrested live on air...