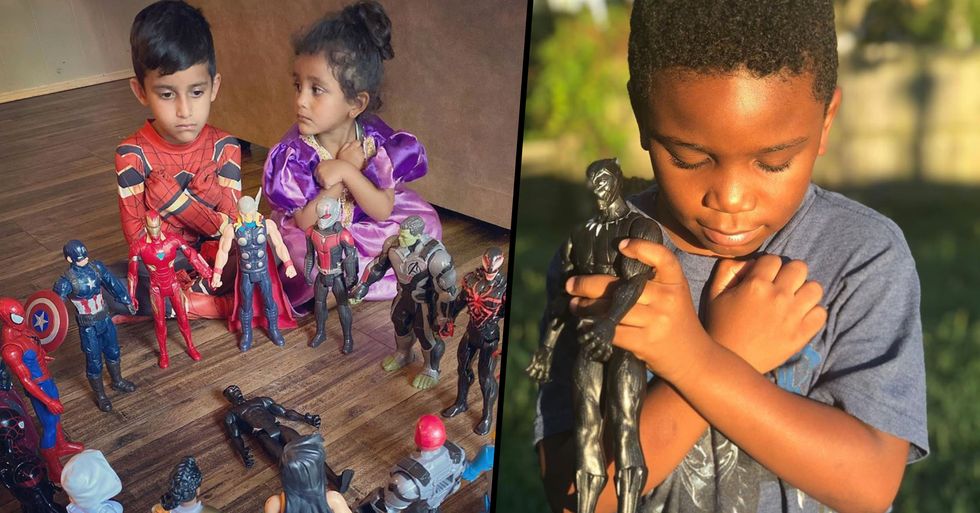 Following the heartbreaking loss of Black Panther actor Chadwick Boseman, tributes have been flooding in from all around the world.

And now, children have been honoring the actor in their own ways with Avengers action figure memorials...

And now, children from all around the world are paying their own tributes.

Ruffalo posted some adorable pictures on Twitter of 2 little boys holding their own versions of wakes for Black Panther with their toys, placing the Marvel figurines in a circle around a laid out T'Challa.

"This is his power and impact on the next generation." So touching.

Parents began sending in heartfelt photos of their own children paying tribute to Boseman...

And it's clear how much the actor touched so many young lives.

His inspiration is global.

@MarkRuffalo @chadwickboseman All the way to the outskirts of #Goma in the #DRC in #Africa, little kids knew about… https://t.co/sfLTiLkFSD
— Emilie Serralta (@Emilie Serralta)1598805851.0

No matter where in the world, Boseman reached out to so many children.

Here's another little boy holding the exact same memorial for the fallen hero.

The proud dad said of his child:

Kian wanted to thank everyone from the bottom of his heart for all the loving and kind words given to him for this… https://t.co/CXoroHr2Zj
— King Westbrook (@King Westbrook)1598750850.0

"Kian wanted to thank everyone from the bottom of his heart for all the loving and kind words given to him for this post. When he found out about Chadwick's passing, he was heartbroken. But he knows death is a part of being human and wanted to cope with losing his hero this way."

Our thoughts and condolences go out to his family during this terrible time.