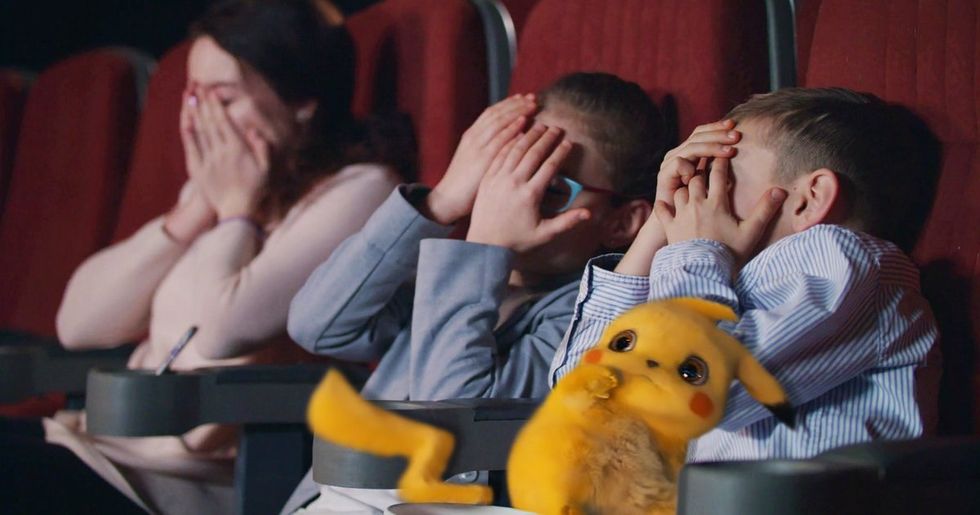 Not every day at work is going to go well. Sometimes, you're going to make a huge mistake. Maybe you're an assistant and you forgot to order your boss' coffee on time. Maybe you're a dentist and you accidentally drilled into the wrong tooth. Maybe you work at Home Depot and you set the paint-shaking machine too high and splashed Dominant Gray all over a United States senator.

The point is, people make mistakes at work. It just happens. The only thing you can do is hope your mistake doesn't ruin someone's life forever.

But sometimes? Your mistakes at work can ruin someone's life forever. That's what happened over the weekend at one movie theater, where an audience of kids ready to see the adorable Detective Pikachu were instead shown... well, not that, that's for sure. These poor little lambs were forced to take a gander at The Curse Of La Llorona, which is a scary, scary movie that surely warped their sweet little minds.

A huge part of being a kid is getting scared.

Since birth, we're being taught to be scared? What more is Peek-A-Boo than a way to make a kid think their parent has vanished without a trace like it was the goddamn Rapture or something.

And kids are fascinated by entertainment that scares them. Who doesn't remember sneaking downstairs to catch a Friday the 13th movie on TNT?

October was the best month for this — all the basic cable TV channels would play edited-down versions of the best horror movies. That means that, even if your mom caught you watching, you could argue that most of the blood and boobs were taken out. It was all the fun of watching Jason hack up teenagers with none of the danger of getting grounded!

But you've got to be prepared for them.

The key to watching scary movies you're too young to see is to be prepared. You have to have a blanket to cover your eyes, a baseball bat to ward off your attacker, and honestly, a dad you honestly believe could beat up a supernatural serial killer.

Otherwise, kids are going to carry around those spooky memories forever.

If you're surprised by something horrible, it sticks with you forever. That's why I'm so glad Blockbuster stores have more or less gone away — those bastards would always put up a big cardboard cutout of Chucky whenever a new Child's Play movie would come out.

And there's at least one theater's worth of kids who will never forget a piece of horror they saw on the silver screen when they went to see Detective Pikachu.

Buckle up, those of you who care about the emotional well-being of children — this one's gonna get hairy.

Instead of the hyper-adorable Pokémon film it was scheduled to show...

Look at Pikachu! He's got a little hat and he's gonna solve crimes! But I bet they're all silly crimes, like who stole Blastoise's last cookie out of the cookie jar!

... this movie theater played The Curse of La Llorana.

JESUS CHRIST WHAT THE HELL IS THIS?!

The great childhood-ruining mix-up took place at Montreal's Guzzo Marché Central, and Twitterer Ryan George was on hand to chronicle the horror.

We are truly glad that @ theryangeorge was there in the theater and chronicling the whole experience. But it does make you wonder — do movies make this kind of cock-up a lot, but simply out of the purview of social media influencers?

The first sign that something was wrong came during the trailers.

The theatre I'm in is playing a trailer for Annabelle Comes Home before Detective Pikachu LOOK AWAY CHILDREN OH NO
— Ryan George (@Ryan George)1557443663.0

But a lot of movies have less-than-age-appropriate trailers in front of them.

Marvel's Ant-Man came out in July of 2015, just about eight months before Batman V. Superman: Dawn of Justice was released, and it's a pretty good bet that the latter had a trailer in front of the former. And to be clear: Batman V. Superman is not age-appropriate... for anyone. Because it sucks.

But after a couple more...

It's good for kids to see movies featuring a bad guy and without so much as a glimpse of a superhero to be seen. They should learn nice and early that the bad guys will always win, often without even anyone even trying to stop them.

I know a lot's been said about the end of Blockbuster, and it is a bummer that there is no longer a central hub of movies for us all to go and walk around in and celebrate cinema. But thank god Blockbuster is gone so I won't have to see a cardboard cutout of this new nightmare Chucky doll.

It's one thing to advertise horror movies to children. But to actually show them real scenes from a horror movie?! That's practically brain assault.

These fools done played The Curse of La Llorana for a bunch of children.

The Curse of La Llorana! Pretty much the scariest movie in the world, The Curse of La Llorana is about a ghost mom capturing children who are not ghosts and turning them into ghosts — not the kind of movie a 4th grade teacher would wheel in a TV to play because they're too hungover to teach, you know what I saying?

From what I can tell, a non-ghost child goes down to the river, finds a La Llorana down there washing her clothes, and runs away before she can ask him to help.

And you can't help but tense up, waiting for a jump scare.

Did you see that kid looking back at the river as he ran? That is the canonical set-up to look back the way he was going and be stopped in his tracks because the ghost mom somehow got in front of him.

When it comes to these Conjuring-verse movies, jump scares are always on the table.

Honest to God, I don't even know if these movies are scary! they're just so full of jump scares that are of course going to scare me! I could watch Rent while my friend just arbitrarily pokes me with a thumbtack every few minutes and be just as scared!

(You just know there was one weird kid who was totally into it though.)

That kid's gonna grow up to have loud conversations on the phone in a packed Starbucks. That's messed up, man. That is a messed up thing to do.

At this point, the theater realized its mistake.

As though the Annabelle Comes Home trailer wasn't enough. Was there some employee up in the projection booth just listening to children crying and going, "hold on, let's just see where this goes..."

Finally, the movie was shut right the hell down.

You know what though? Maybe that employee up in the projection booth was just watching this play out in super slow motion, like he was in the middle of a car crash.

The audience was moved into another theater...

The parents and children were ushered out, but they were not stepping out of that theater the same way they'd gone in. They'd seen some stuff, man. They had seen some stuff.

... where Detective Pikachu was onscreen and paused.

We've all been moved to another theatre where Detective Pikachu is just paused? At least there aren't any more murd… https://t.co/XpmO1pX1h8
— Ryan George (@Ryan George)1557445563.0

We'd like to think that seeing Pikachu was a relief for these poor kids, but sadly, it probably wasn't. They were probably worried Pikachu would go down to the creek and find a ghost mom.

That means a bunch of La Llorana viewers were shown Detective Pikachu instad of the terrifying movie they paid to see.

They probably saw a trailer for, like, Despicable Me 4.

And for some reason, no one's talking about these adults' pain.

Who is looking out for the poor men and women who were, well not traumatized, but almost certainly confused for a minute (before they realized someone at the theater just made a mistake and that it would either be rectified shortly or they could ask for a refund.)

In any event, the kids who were scarred by Annabelle and Chucky and a few minutes of ghost moms eventually got to see their favorite Pokemon solve some crimes.

So that's... you know... a small consolation? I guess I'd rather they eventually see Detective Pikachu right away, so as to wash the horrifying taste out of their mouths.

But will they ever forget the opening minutes of La Llorana, which showed them their first-ever glimpse of the weeping woman?

I hate to say it, but these kids are probably going to have nightmares about this scene for the rest of their life. I mean, not every night. It'll probably get worse when they're more stressed.

And can we not pretend there aren't some horrifying moments in Detective Pikachu?

What is this mime man's deal?! And why does his skin look like a mask made of someone else's skin?!

The kids who went to see Detective Pikachu on this fateful day might always have a fear of people under sheets.

And It may never be able to watch comfortably watch movie trailers ever again.

And that's a huge bummer, because movie trailers are low key the most exciting part of a movie. I can't imagine being anything but excited when you're at a theater opening night and the trailers could be for literally anything.

Then again, I'll never be able to watch comfortably watch movie trailers ever again after I watched that Spider-Man: Far From Home trailer.

Obviously I'd already seen Avengers: Endgame when I sat down to watch the Far From Home trailer, but still, the fact that massive, massive spoilers for movies that had come out maybe three weeks prior are now on the table? That's terrifying. And honestly, it's the reason I'm not going to ever watch for a movie in the How to Train Your Dragon franchise. I don't want to know if he trained his dragon!