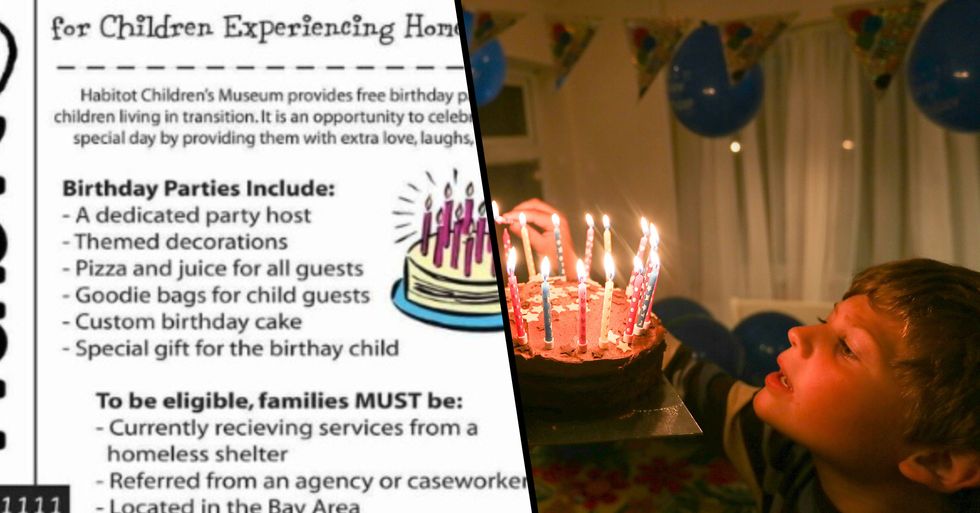 Homelessness is a horrifying problem - and it can be particularly heartbreaking to think of young people living on the streets. It's going to take a huge institutional change for us to see a real difference, but one museum in Alameda County is doing their bit. Scroll on for their heartwarming initiative ...

The homeless often miss out on life experiences.

Many report feeling as though they're operating outside of the rest of the world.

A growing number of under-eighteens are living without a permanent address.

Meaning they end up missing out on lots of aspects of a regular childhood.

And one that we didn't even think about.

Which gave one institution an idea.

There must be a way for homeless children to celebrate their birthdays!

And they believe that homeless children deserve to experience the joy of childhood, too.

And they've now extended a generous initiative to the homeless community.

The set up includes pizza for the kids and their guests.

What kids party would be complete without them?

Kids can also expect a cake.

Again, truly the cornerstone of any party.

It's amazing how generous the spirit of strangers can be in times of need.

And, understandably, people have been loving the news.

Because alongside things needed for survival, kids also need to experience joy and love.

Homeless kids of all ages could probably do with a positive experience like this one.

It truly restores our faith in humanity when strangers offer such generosity and kindness.

It's heartbreaking to think about kids having to go without.

And the fact that now some don't have to is really genuinely great news.

Want another heartwarming story? Scroll on for the homeless busker who captured the internet's attention.