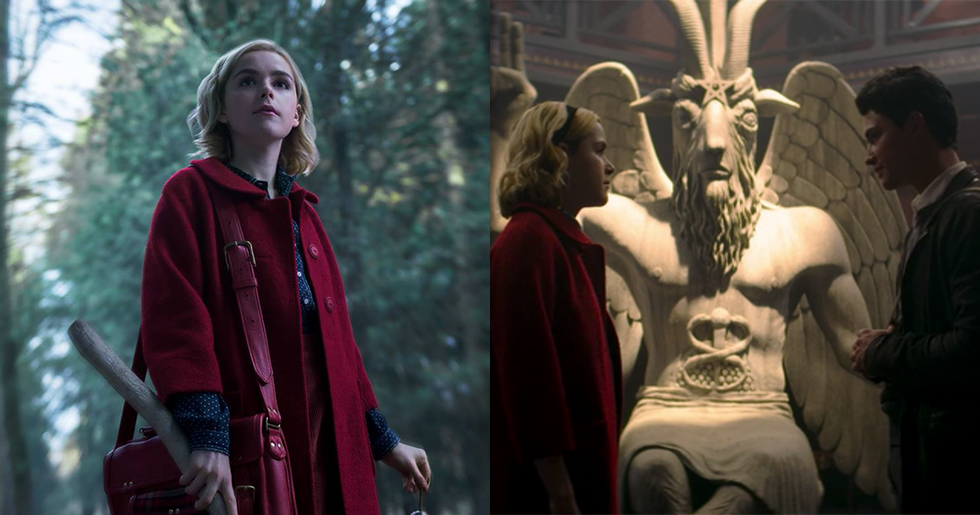 'The Chilling Adventures of Sabrina' May Be Removed From Netflix

Bad news for those of you who have yet to binge Netflix's Sabrina the Teenage Witch reboot! There's a good chance it could be permanently removed from the streaming platform. That's because the actual Satanic Temple is suing the streamer (along with Warner Bros) for copyright infringement to the unholy tune of 50 MILLION DOLLARS.

In the series, Sabrina attends a school called The Academy of the Unseen Arts. Inside the school there's a statue dedicated to the Dark Lord (this all kinda sounds like Harry Potter, am I right?) — and the Satanic Temple claims it’s an exact replica of their proprietary Baphomet statue. Which is copyrighted. Yikes.

Satanic Temple co-founder Lucien Greaves told SFGate they were taking legal action because, "It looks like it’s a CGI facsimile to begin with. I don’t know how much work that takes, but I simply refuse to have our monument used in this way in perpetuity. I don’t want our monument to be associated with this."

He even tweeted out proof of the real statue's similarity to the CGI version in the show.

For reference, the top photo is The Satanic Temple's photo, and the bottom is the one in Sabrina.

But he wasn't done bashing the show...

Greaves went on to call the show "asinine Satanic Panic," referencing the widespread fear of satanic ritual abuse in the '70s and '80s, that amounted to nothing more than moral uproar over conspiracy theories.

Some fans on Twitter are NOT about this lawsuit though.

Remember the good ole days when Satanic temples would use satanic rituals to curse those who had offended and relea… https://t.co/M7vTdWQXZ6
— Jessica Evans 🇪🇸 (@Jessica Evans 🇪🇸)1541129151.0

To be fair, aren't these Satanic Temple people supposed to have some kind of dark powers? Are lawyers really the scariest thing they can bring upon Netflix?

There's a good reason why the Temple wants the statue to be removed from the show.

According to legal documents obtained by website The Blast, the Temple states, “Defendants misappropriated the TST Baphomet Children in ways implying that the monument stands for evil. Among other morally repugnant actions, the Sabrina Series’ evil antagonists engage in cannibalism and forced-worship of a patriarchal deity." Wait, record scratch. We were with you up until the evil thing. Does the Satanic Temple not embody evil? Apparently not!

According to the About Me section of the Satanic Temple's website...

The mission of The Satanic Temple is to encourage benevolence and empathy among all people, reject tyrannical authority, advocate practical common sense and justice, and be directed by the human conscience to undertake noble pursuits guided by the individual will. Politically aware, Civic-minded Satanists and allies in The Satanic Temple have publicly opposed The Westboro Baptist Church, advocated on behalf of children in public school to abolish corporal punishment, applied for equal representation where religious monuments are placed on public property, provided religious exemption and legal protection against laws that unscientifically restrict women's reproductive autonomy, exposed fraudulent harmful pseudo-scientific practitioners and claims in mental health care, and applied to hold clubs along side other religious after school clubs in schools besieged by proselytizing organizations.

There are 7 main tenets of the Temple:

One should strive to act with compassion and empathy toward all creatures in accordance with reason. The struggle for justice is an ongoing and necessary pursuit that should prevail over laws and institutions. One’s body is inviolable, subject to one’s own will alone. The freedoms of others should be respected, including the freedom to offend. To willfully and unjustly encroach upon the freedoms of another is to forgo one's own. Beliefs should conform to one's best scientific understanding of the world. One should take care never to distort scientific facts to fit one's beliefs. People are fallible. If one makes a mistake, one should do one's best to rectify it and resolve any harm that might have been caused. Every tenet is a guiding principle designed to inspire nobility in action and thought. The spirit of compassion, wisdom, and justice should always prevail over the written or spoken word.

That seems pretty legit. So, why can't we all just get along?

I find it funny how the Satanic Temple feels that a comedy Netflix show about a teenage witch is giving a bad name… https://t.co/Rs5GZvrWS6
— AlexVNDGRM (@AlexVNDGRM)1541363378.0

This tweet makes a fair point. Remember when Sabrina was actually a show for kids?

For those who haven't seen the Netflix show yet, it's worth noting that this version is quite a bit darker than the original.

The show's creator, Roberto Aguirre-Sacasa, is also the creative genius behind everyone's favorite CW teen soap, Rivderdale. The two shows actually live within the same comic book universe. The fictional towns of Greendale and Riverdale exist on either side of Sweetwater River, and all Riverdale fans will remember Sweetwater as the location of Jason Blossom's disappearance.

Like Riverdale, the show is meant to evoke a timeless quality.

When you watch the show you’ll see cellphones, you’ll see laptops, you’ll see Victorian dresses. Some of these witches and creatures are hundreds of years old, so we’re trying to show that layering of history, and also trying to give everybody in the audience a chance to grab onto something that they like and that they're nostalgic for. We're not locked into a time.

Fans of both shows know that there has even been a character crossover from the Riverdale world to the Sabrina world.

In season 3 of Riverdale, Ben Button seemingly jumped out of a window at Riverdale General hospital, but in a bizarre and death-defying move, he suddenly appeared in the Sabrina universe when he showed up on Ms. Wardwell's doorstep to deliver a pizza... and then some.

Since premiering, these two shows have seen their fair share of outrageous fan theories.

When asked about what it's like to be such a mysterious character on both shows, actor Moses Thiessen told Teen Vogue, "It's fun and I get to give my own opinion on the matter, but at the same time I'm left in the dark just as much as everyone else. The fan theories, they're exciting to me because it makes me think, "Oh, maybe something could happen with this character."

In the end, we're really only upset about one thing in the new Sabrina...

The lack of talking, sarcastic, animatronic cat, Salem Saberhagen. No one could ever replace his deadpan humor and strange, puppet-y body shape. So, have you watched Sabrina yet? If not, it might be time to rearrange your plans this weekend and get to binging!