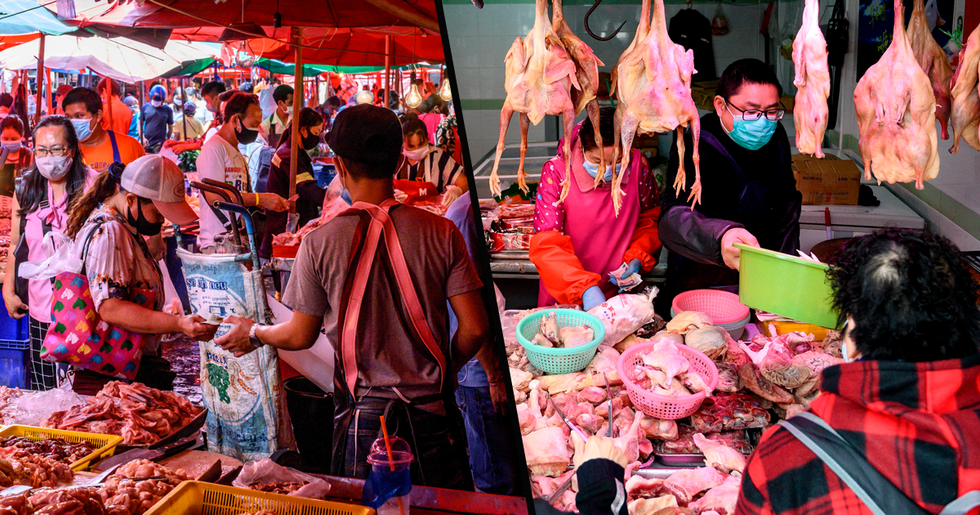 The news has just come in that China's biggest wet market has now reopened its doors during the global pandemic.

Keep scrolling to find out about the link between these markets and the spread of the deadly virus...

China is well known for its notorious livestock wet markets...

And just days after the pandemic lockdown was lifted, the country's biggest wet market has reopened for business.

China's wet markets have been an essential part of the economy for years and they are now a huge part of the Chinese culture.

And what exactly is a wet market?

A wet market is a marketplace in China and South East Asia that sells fresh meat, fish, produce, other perishable goods, and more than often, live animals that are slaughtered upon customer request.

But because of the ones that do, they have now earned themselves a very notorious name for their inhumane and cruel acts upon their livestock.

And it is completely undeniable that these markets are unnecessarily cruel to their poor animals.

Speaking recently to host Howard Stern on his Sirius XM radio show, McCartney said, "I really hope that this will mean that the Chinese government will say, 'OK, guys, we have really got to get super hygienic around here'. Let's face it, it is a little bit medieval eating bats."

But despite all of this backlash, they continue to be very popular...

One of the biggest wet markets in China is located in Wuhan...

And what is Wuhan now best known for? Starting the global pandemic, of course.

The deadly virus that has now infected more than 2 million people globally is strongly believed to have originated from the Wuhan wet market - Huanan.

It is also believed to have been contracted from the consumption of fruit bats, which are sold regularly at the market.

The market closed its doors on the 1st of January due to the outbreak.

Before the pandemic, around 3,000 trucks would come to the market every day through four entrances to bring over or pick up supplies - meaning this will have affected China's economy greatly.

The number of virus cases in China have dropped significantly since they implemented lockdowns a few months ago...

And things now seem to be resuming normality in the country.

The news has just come in that the country's biggest wet market has now reopened along with many others.

The Baishazhou market is one of Baishazhou's main food wholesale markets and it is already booming with business, despite being open for just a couple of days.

They are still taking precautions, of course...

Customers and vendors now must have their temperature taken by health workers at the entrances of the market and they must also use an official health app to prove they don't have the virus before being allowed in, according to local media.

However, even though officials have now banned the selling of livestock at these markets...

Footage from local media showed of crates of live crayfish up for sale at Baishazhou market - meaning the risk of spreading infections and viruses is still imminent in these environments.

The World Health Organization have been supporting China while they reopen their markets and businesses...

And it's safe to say that people are not happy about this.

Many are baffled as to why the wet markets are being reopened...

Especially as they are believed to be the main source of the deadly virus and many other health risks - including the SARS pandemic many years ago.

For further updates on the pandemic...

Make sure to keep scrolling...