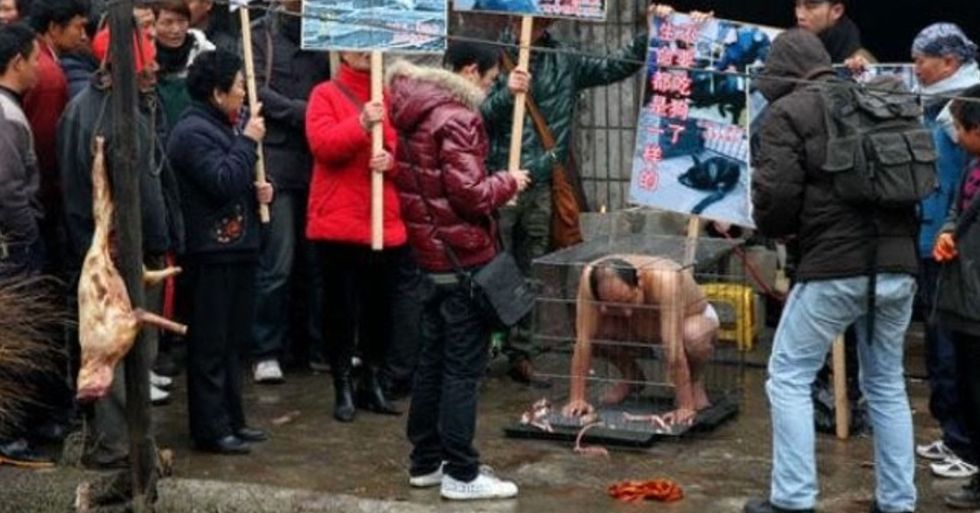 Since the start of this pandemic, a light has been shone on the outdated tradition continuing to take place in China's wet markets, despite the recent ban on the production of cat and dog meat, there are still remote places carrying out this practice.

One Chinese activist has taken to the streets of major Chinese cities, to spread his message in order to get these "banned" slaughterhouses to close down once and for all...

Animal activists know how to make a statement.

Never ones to beat around the bush, animal activists are known for their over the top and eccentric ways of communicating their beliefs.

Whether they're forcing the public to watch graphic footage from slaughterhouses, or laying on a table covered in fake blood while being "carved" with a giant knife (we can't make this stuff up...), these activists will go to extreme lengths to fight for animal liberation. You have to admire their enthusiasm, though.

And they're often making headlines with their antics.

Like the time that animal rights group, PETA (People for the Ethical Treatment of Animals), staged a "dog BBQ" in the middle of London. Don't worry everyone, the dog was fake. But still, it was quite a shocking and, quite frankly, disgusting sight.

Who remembers the time that PETA blamed milk for autism?

When they're not causing outrage with graphic and bloody stunts, they're enraging people with their outlandish and somewhat dramatic claims. Like this assuming statement about the link between autism and dairy. Keep reading to hear about another ridiculous stunt that PETA has pulled in the past.

They're not afraid to go on the front line for animal liberation.

Animal activists have never been ones to shy away from the gory reality of slaughterhouses. Many different groups have stormed slaughterhouses in the past, and have often resorted to chaining themselves to machinery or releasing animals to halt the slaughter process.

Chaining yourself to heavy machinery that is designed to kill animals is always going to be risky business, isn't it?

Well, one Chinese activist isn't fazed by the risks his performance might provoke...

Above all else, he wants to permanently ban the sale and production of dog meat in China.

Despite China already placing a ban on the production of cat and dog meat, there are certain remote places still practicing this awful act.

Due to it being a part of their culture.

This is why some of these places still exist, run by people who haven’t developed any kind of affection towards these species.

But one man is doing everything in his power to change the mindset of the people practicing this dated tradition...

Throughout China, he presents himself half-naked in small cages, demanding that the killing stop.

And his performances have left quite a mark on viewers.

It's amazing to see someone so passionate about stopping these inhumane practices.

It's not Pian Shan Kong who should apologise it's the animal torturers who should say sorry for their pure evil acts https://t.co/z3XFz3SuK8
— David Taylor (@David Taylor)1434664484.0

Even if it goes against everything his country stands for...

One of these people is artist Pian Shan Kong, who’s become a devout activist in the fight against the consumption of dogs.

According to the Libera Animal Association, he travels all over China to bring his message through performance art.

To get his point across, he locks himself in a cage half-naked in front of the slaughterhouses.

By doing this, he tries to convey what each of the dogs is going through, and get people to empathize by showing what it would look like if we were the ones suffering.

This forty-seven-year-old has awakened the consciousness of many by making it clear that it’s never too late to change history.

However, this is a tough battle, since in addition to being a deep-rooted tradition, this is a multi-million dollar business, that some people won’t want to leave behind out of greed.

The consumption of dog meat in this country dates back thousands of years, which is what makes it socially acceptable.

Although not everyone in China consumes this house pet, and many are trying to completely ban this practice.

Thankfully, this mistreatment has recently become illegal, with some cities deciding to go ahead and completely abandon this outdated custom.

Nature has already sent a signal to the world via this ongoing pandemic, and activists like Pian Shan Kong continue to fight for what's right.

Pian Shan Kong doesn't just lock himself in a cage to protest against this business, he also kneels and asks nature for forgiveness for these kinds of dehumanizing acts.

Although this subjects him to ridicule and threats, he doesn't alter his performances.

I think we could all learn a thing or two from Pian Shan Kong.

His message is louder now more than ever that there's always time to change and become a better person. Keep scrolling to find out more about the cat and dog meat trade in China...