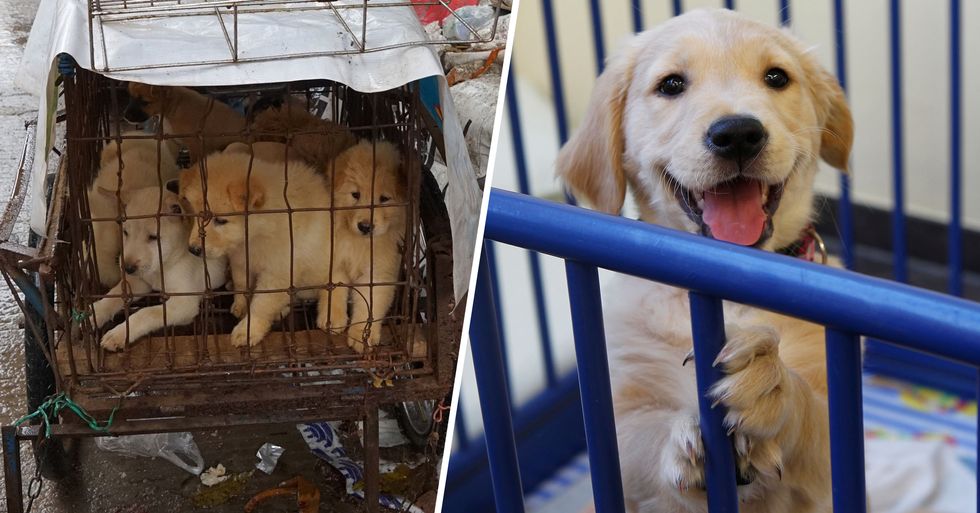 The wet markets in China have been selling exotic animals of all varieties for decades. Wildlife is skinned and butchered on the sidewalk you stand on.

Although officials have closed down the main markets, there are still some vendors performing this unethical practice, and some even offering cat and dog meat.

However, the very foundation of Chinese culture has been shaking, and things are beginning to change.

Keep scrolling for the shocking footage...

Despite being blamed for the coronavirus outbreak!

Experts warn these sites are a "ticking time bomb."

If not shut down, this could lead to a new disease sweeping the world and taking out another 45,000 more people with it.

There really is no end to the variety of wildlife killed and sold.

These "perishable goods" sold at wet markets all across China consist of animals such as; raccoons, eagles, bats, dogs, cats, otters, snakes, tortoises, and peacocks, which are just some of many animals traded dead or alive.

These wilds animal products have been linked to outbreaks of Zoonotic diseases.

Coronaviruses, such as #COVID19, are zoonotic, meaning they are transmitted from animals to humans. Such illnesses… https://t.co/ETbR2Ltoso
— United Nations (@United Nations)1585443780.0

The species being sold, which aren't used to mixing in the wild, are more vulnerable to catching viruses from one another when kept together in small, enclosed conditions such as at the markets.

The Chinese government has closed these grisly shops.

"We've managed to encroach on every corner of the planet into the natural world. Normally we would not be coming in… https://t.co/CXPaX3o9Pf
— Denise Balkissoon (@Denise Balkissoon)1585332851.0

But countless others are still operating all across Asia.

The horseshoe bat Chinese scientists identified as being the origin of the coronavirus was not sold at the meat mar… https://t.co/cbkCLtLH9v
— Paul Joseph Watson (@Paul Joseph Watson)1585741826.0

Vietnam, Malaysia, Thailand, Burma, Indonesia, and Laos all have a culture of selling exotic animals dead or alive to local markets.

Many are using a single blade.

To butcher a whole host of different meats, which as you might realize, isn't at all hygienic.

According to reports, Indonesia's Tomohon market is up and running.

This is despite the local mayor banning wild meat!

Barbequed bats are a specialty.

Sold alongside monkeys, dogs, and cats which are slaughtered in front of customers at the "Extreme Market," a name given due to its cruel nature.

Professor Andrew Cunningham, of the Zoological Society of London, said the stress caused by animals being held in cages increases the scale of "virus shedding."

If China keeps these markets open the world should treat that as an act of biological and economic warfare and shou… https://t.co/0VqGm7eMYr
— Ryan Saavedra (@Ryan Saavedra)1585732132.0

“Where live animals of different species are brought together and held in overcrowded and unhygienic conditions, the likelihood of an animal being present that carries a potentially zoonotic virus - which are passed from animal to humans - is increased. The highest priority for the protection of human health is to ban wet markets."

The trade is estimated to be worth seventy-two billion dollars a year, there are fears that powerful industry players may force governments to keep the markets open.

But it's not just wildlife they're selling on these markets.

Many of these stalls contain pets that have been stolen from the streets or backyards of loving owners, just to make some money.

Shenzhen has become the first city to ban the production and consumption of cat and dog meat.

The city, containing thirteen million residents has introduced these rules that will start on May 1st.

Lawmakers have called it a "universal civilization requirement for a modern society."

According the US intelligence, China lied and concealed the extent of the Corona virus outbreak. That bad data led… https://t.co/kVLnMgu9Jk
— Bill Browder (@Bill Browder)1585757112.0

A spokesperson for the Shenzhen government said: "dogs and cats as pets have established a much closer relationship with humans than all other animals, and banning the consumption of dogs and cats and other pets is a common practice in developed countries and in Hong Kong and Taiwan. This ban also responds to the demand and spirit of human civilization."

Animal activists have been calling for these measures for years.

And although one city has agreed to ban the consumption and trade of wild animals, China has only put a temporary ban in the wake of the coronavirus. People all over are worried that those rules will be relaxed when the cases of COVID-19 reduce.

Shenzhen's new ruling on cat and dog meat will be a permanent ban.

Dr. Peter Li of the Humane Society welcomed the news.

Saying: "With Shenzhen taking the historic decision to become mainland China's first city to ban dog and cat meat consumption, this really could be a watershed moment in efforts to end this brutal trade that kills an estimated 10 million dogs and 4 million cats in China every year. The majority of these companion animals are stolen from people's back yards or snatched from the streets, and are spirited away on the backs of trucks to be beaten to death in slaughterhouses and restaurants across China."

Maybe trump and the republicans could have gotten a clue about how serious the corona-virus was from these 2/10/20… https://t.co/BlNENzKbjZ
— Thomas Kaine (@Thomas Kaine)1585778738.0

"Shenzhen is China's fifth-largest city so although the dog meat trade is fairly small there compared with the rest of the province, its true significance is that it could inspire a domino effect with other cities following suit. Most people in China don't eat dog or cat meat, and there is considerable opposition to the trade particularly among younger Chinese."

Hopefully, this new ban will start a ripple effect across China.

"Although World Health Organization advice is clear that dogs and cats pose no known coronavirus threat whatsoever, it's no surprise that attention is turning to this trade at this time because it undoubtedly poses a huge human health risk for other diseases such as rabies, as well as causing immense animal suffering." If you're looking for something a little more heartwarming, keep scrolling to see what these zookeepers did for their animals...