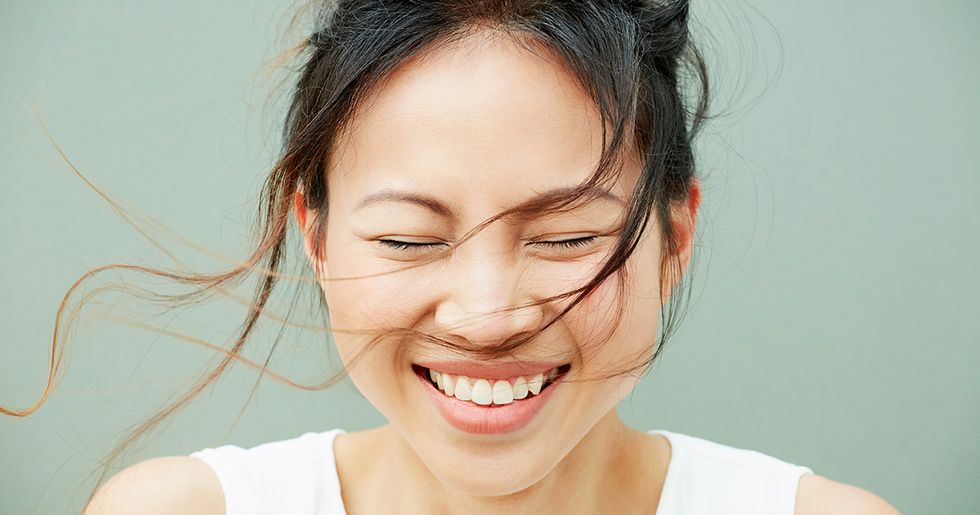 There is, objectively, nothing more beautiful than a tattoo in elegant foreign script. These tattoos of Chinese characters always stand for some sort of relaxing platitude that reminds the person who's gotten them inked upon their body needs to remember — we're talking words like "peace" or "serenity" or "beauty" or "[sound of water]."

At least, that's what the people who get these tattoos think they stand for. Usually, these folks are heading to whatever tattoo shop is closest to their favorite Baja Fresh and waving their hand, going "give me, like, 'joy' in Chinese" and the tattoo guy grunts and does his best approximation.

As you can imagine, that leads to some mistranslations that are hilarious to anyone who actually speaks Chinese. And now, some of those Chinese-speakers are taking to the internet to describe some of the funniest tattoo mist-translations they've ever seen.

Here's the secret — if you don't speak Chinese, don't get a Chinese tattoo. Or, at the very least, don't take a trip to China and expect to not make everyone laugh.

My buddy has "illiterate foreigner" in traditional Chinese characters. It's dope. - paostmo

Aww, look at the widdle chicken.

"Tiny chicken." My friend got that thinking it said his name. - KoGTRB

I came. I saw. I forgot to empty the dish drainer.

My friend got a tattoo that said "veni vidi vici" in chinese... or so he thought. The tattoo actually said "three small dishes." - xopokxo

In a way, we're all katanas.

Please don't use Google Translate to translate tattoos. I once saw “i once am a katana." - DerpysealzVI

Ugh, that goldfish man has got to go.

I once saw this middle aged dude wearing "金魚佬" on his shoulder (the rough literary translation is "Goldfish Man"), which in Cantonese means a sleazy older man who creeps on younger girls/children. Wonder under what circumstances he got that inked... - Olokojamkong

You hate to see it.

I saw somebody who probably doesnt understand Japanese flexing with his Japanese tattoo. It is translated to English, surprise surprise, "a giant failure." - GMBoxer

They come from royal stock.

A friend of mine had a classmate in college with a kanji tattoo. She said it meant “High princess." Turns out it actually said “pig princess." - whereegosdare84

It's actually pretty wise to fear everyone.

Got a tattoo in Google Translate Japanese thinking it says “fear no one" but it really means “I fear everyone." - Krusty_Krab_Pizza_

Imagine if your Patronus was a desk.

机 on his fist. I haven't taken Chinese but in Japanese it means "desk." - feverishdodo

The mistake is better than the intended tattoo.

I was scrolling through the web looking at some tattoos for fun, and a person said they got a tattoo that said "Strength and courage" in Japanese. It actually said "Little animal, big mistake." Great quote imo. - GoSuckAJellyfish

Imagine having your whole life blown up by a stranger who speaks Chinese.

I have 'Monkey' on my wrist because that's my Chinese zodiac. I know it's accurate because a Chinese guy asked me if I knew what it meant, and I'm sure he thought I would say 'faith' or 'love' or something, so when I said 'monkey' he looked so relieved. His friend was like 'you have GOT to stop doing that!' - Cdnteacher92

I was on the subway in NYC and there was a guy who clearly lifted a lot. He was wearing a sleeveless shirt and on his jacked arms in Chinese were the words “牛肉麵" or “Beef noodle soup" for everyone to see. Man looked ready to get the rest of his favorite restaurant’s menu tattooed on his body. - nyaaaarp

Do your research, folks.

A friend of mine had a tattoo shop. He put up a flash page with kanji for stuff like "*sshole", "b*stard", etc. If anyone asked the meaning, he would honestly tell them. However, he would regularly get people come in, see the character, think it "looked cool," and get it inked on without ever bothering to ask. He thought that was hilarious. - Nymaz

Aww, I'm sure he was very cute.

40+ year old bald white guy with Chinese characters that translated as “I’m a cute little princess" on the length of his forearm. - Lmaooozedong

Too specific to be an accident.

I saw this guy with Japanese characters that translated to “Beep Beep Lettuce." - noobcabinet1

Well, you'd need a strong will if you forgot your cleanup bags.

I met a guy in the airport who had two symbols on his shoulder. I asked him what his tattoo said. He said " It means strong will, bro." I didn't have the heart to tell him... his two symbols were "dog poop". - Halzbog

I met a girl who showed me her tattoo saying it said "love". Sadly it said "weird". - TimandJoshBricks

Maybe she was allergic to fish.

Saw a girl with 魚 tattooed on her shoulder who swore up and down it meant poison... It means fish. - HuffMyJock

You can be both fat and tough.

"I'll have one cool tattoo that means 'power' please."

In high school I worked at a CVS. A white woman showed up at the register with a very poorly-drawn 力 tattoo, and I said “cool tattoo, means 'power'." She scoffed and replied to me like I was Satan himself, and said “You obviously don’t understand Chinese “letters." The tattoo artist told me it means the strength to overcome anything, even breast cancer..." then she rolled her eyes at me and walked away. - cmilkrun

The common word for "and" gets mistaken a lot of "peace", which is two words, "and" being the first of them("wo" vs. "wo ping" in Cantonese). So there are a lot of people who just have the word "and" tattooed on them and I think that's hilarious. - Doidlewok

My best friend, who we’ll call "Sarah," got a tattoo when she was 16 (where I live, you’re supposed to be 18). Her dad passed away about three years before and she wanted to get a tattoo on her wrist to remember him. Instead of getting his name, which would’ve been easier, she decided she wanted to get “dad" in Japanese. It’s been two years since then and I still haven’t told her that it says “turtle." I know that she’ll hate herself if she finds out, but to be 100 percent honest... I kinda like it. I was actually thinking of getting it on my wrist too. My dad passed away when I was only 11, so she’d think I got a tattoo saying "dad" as well, but I’d actually just be getting a pretty hilarious tattoo that I kinda love... - Lil-Dick-Energy

Everyone in town thought this guy was a real ass glove.

I once saw “ass glove" tattooed on someone’s chest in German. They said it meant “Peace for all." - SupremeOverlordBacon

And they were right!

A friend of mine once told me he saw a guy with something like ‘I don’t speak this language’ tattooed on his arm. - Vaysum

Ah, the subtleties of language.

Former colleague of mine had "spirit" tattooed on his arm in Chinese. Some years later, during a trip to China, he discovered that what it actually said was "gas." - avant_gardener

They are very cute and chubby.

He thought it said “Love my grandson". It translated to something like “I love fat boys." - MisterComrade

"Public restroom" is a great way to describe my cousin.

I can read Chinese and I met a guy who wanted a tattoo that said "Hope," so I guess they looked it up in the dictionary and had the first two characters after "hope" tattooed on them, which were "名子“. Which says "noun." - myfinanceaccount1