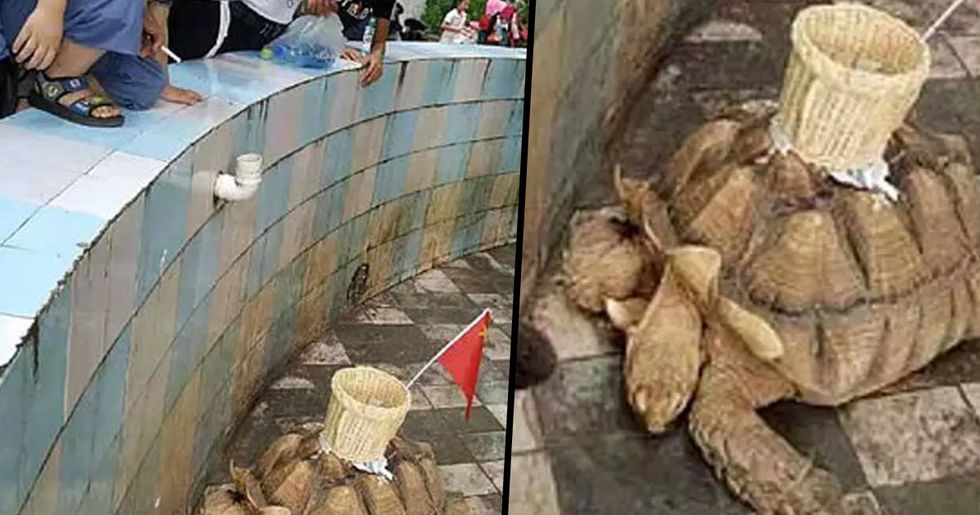 When it comes to keeping animals in captivity, it is of the utmost importance to ensure that they are kept as healthy and happy as possible. Their environment must mimic that of their natural habitat as much as possible, or else keeping an animal in confinement is cruel and inhumane.

A zoo in China has recently faced criticism after tourists captured images of a poor tortoise who had a wicker basket glued to its shell for visitors to throw money into. Keep scrolling to learn more...

Over the years, there has been an endless debate over the humanity of zoos.

And whilst animals are the ones who pay the price, visitors can also suffer.

Tatiana, a Siberian tiger, escaped her substandard enclosure at the San Francisco Zoo in 2007 and was shot to death after she killed one person and injured two others; she had mauled one of the zookeepers a year earlier.

The story of Tatiana isn't the only incident wherein an innocent animal has been killed simply becuase it isn't natural for them to be in an enclosure.

A gorilla named Jabari tried to escape from the Dallas Zoo by jumping over walls and moats and evading electrified wires, only to be fatally shot by police; a witness later reported that teenagers were taunting the animal with rocks prior to his escape.

Animals endure great deals of stress, fear, and anxiety when locked up in zoos.

And this applies to all animals, not just the big ones.

The South American creatures are known well for their placid natures and slow paces, making them the ideal animal for a petting zoo.

Some breeds of tortoise are kept as pets.

But this has been strongly advised against by WWF, who have reminded pet owners that, despite their slow and placid paces, tortoises do not want to be kept as quiet pets.

If they escape from your back yard, they will not come back home as a cat or a dog would, simply because they are primitive animals; they are instinctive enough to wander in the wild.

Tortoises don't deserve to be locked up in a zoo...

And nor does any animal, for that matter!

But a zoo in China begs to differ...

Photos have emerged on Weibo (a social media platform similar to Facebook) by user Tea-tia from Nanning Zoo, which is in the provincial capital of Guangxi. The photos show a tortoise in an enclosure with a wicker basket glued to its shell.

The shocking photograph shows the poor tortoise in an unsuitable enclosure...

Tortoises in the wild live in hot and desert-like climates with sandy and grassy terrain... not upon a dirty concrete slab that resembles that of an unused swimming pool.

The basket was clearly placed there as a publicity stunt for the zoo.

The park's workers seemingly attached a Chinese national flag to the tortoise as visitors tossed money at it - a symbol of good luck.

Throwing money into specific targets is a sign of good luck in Chinese culture...

It is believed that, by doing this, you are granting yourself good luck and are also warding off evil spirits - this could range from a statue in a park to a bell in a temple.

The person who posted the photographs is not pleased with the treatment of the animal.

Tea-tia's post accused the zoo of trying to "swindle" people out of money as the photo was taken on the National Day of the People's Republic of China on October 1st, and urged the National Forestry Bureau and state media to investigate the matter.

The user expressed how poor the conditions in which the tortoise was being kept in were...

Speaking to Pear Video, the user said: "I don't know why the zoo would use this method to exhibit precious animals."

There were no zookeepers in sight, apparently.

According to The Daily Mail, the zoo is now investigating the matter and it is unknown as to whether the basket was actually glued onto the shell of the unfortunate tortoise.

All we can do is hope that the zoo does the responsible thing...

By removing the tortoise from their confinement and placing it into an appropriate and safe sanctuary as these creatures live for many years - and the poor animal doesn't deserve to spend its life on a cold, concrete floor being used as a money-making prop.