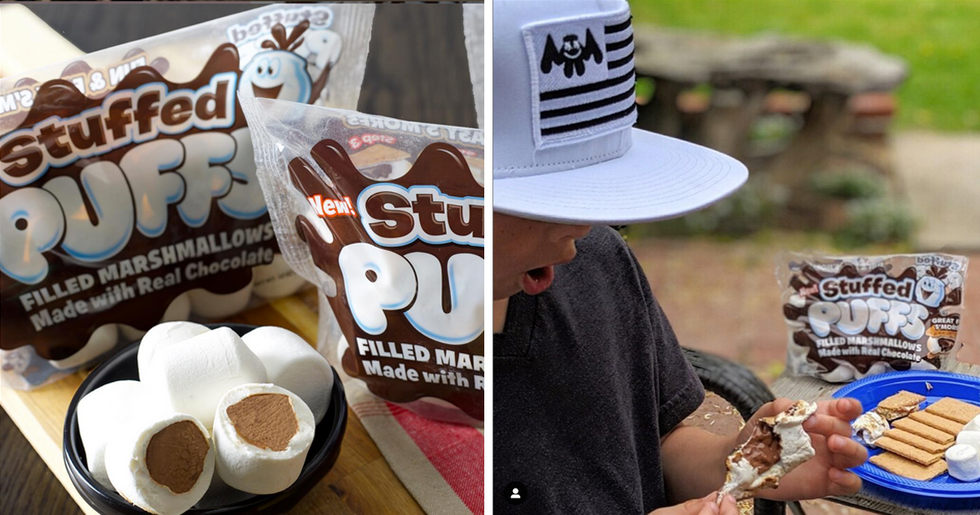 Chocolate Stuffed Marshmallows Are Going to Make S'mores Even Better

S’mores are a pretty common part of camping life….

How else do you get your kids excited about leaving the technological comfort of their home, to sleep under the stars? You have to promise them a loving dose of marshmallow and chocolate, served between two warm crackers.

The notion of the s’more is simply perfection, three of life’s sweetest things brought together in loving harmony. But, it seems someone thought that it just wasn't enough and so they invented the best thing ever!

These new marshmallows will blow you away!

Camping can be great.

On a camping trip, we become one with nature, see all the beauty that the Earth has to offer, and return to our roots of living in the wild.

But that doesn’t mean that everyone enjoys it.

These days, camping is a dying hobby, maybe because it removes us from the warmth and comfort of our homes.

It also takes us away from all the mod-cons.

We may be able to take an iPhone with us to the forest, there won’t be many places to charge it.

So, what’s a great way to make camping exciting?

Well, how about some delicious s’mores?

You know you want some…

Borne from the campfire lifestyle, s’mores bring two delicious desserts together in a perfect balance.

Who doesn’t love chocolate and marshmallows?

But there’s always room for improvement.

You may be thinking that it's impossible, but wait until you hear this news.

Chocolate-stuffed marshmallows are now a thing!

Yes, breathe it in folks.

Because they’re hitting the shelves soon!

This new delicacy will be hitting Walmart shelves from 28th April.

And they have the best name!

But there’s a hidden treat inside.

Once you’ve bitten into the soft outer surface, you’ll find a sweet, chocolatey filling within.

Imagine that on a s’more!

Imagine adding that beautiful creation to a fire! It would be like entering dessert heaven.

Guaranteed to make camping even better than before.

Next time you’re worried about your kids’ attitude to camping, just remember to pack a bag of these in your cooling bag.

Because who could resist them!

But that’s all we know so far.

Not much has been reported on the product, other than their release date. Let the countdown to April 28th begin!