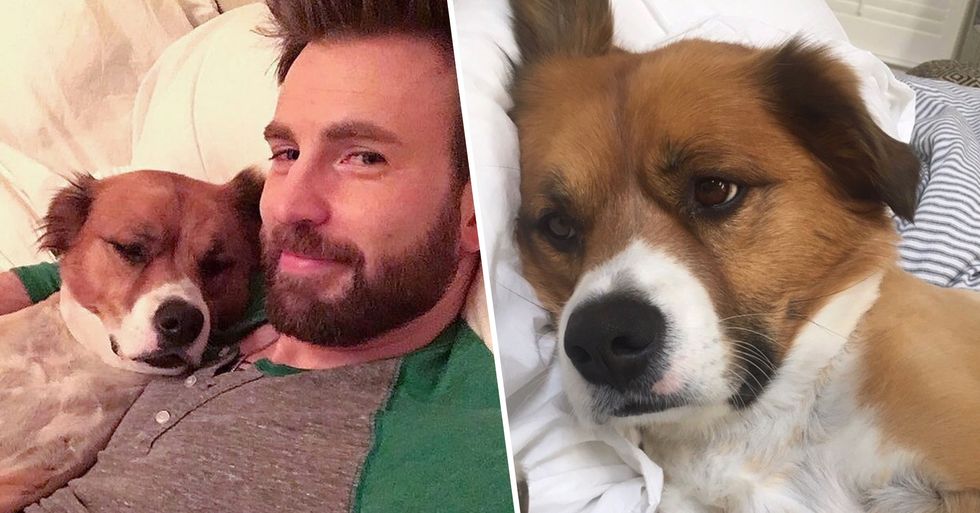 And believe it or not, he is dedicating it to sharing photos of his dog...

The first of which, let's face it, is being an absolute heartthrob.

But now, there's one role that he's best known for...

And that's not the only reason why he's so well-loved...

Evans is the proud owner to his beloved pooch, Dodger...

And the pair seem to be completely inseparable.

During Comic-Con, Evans was in the middle of speaking when he spied a cutie in the audience – in costume, of course. So Evans did what any reasonable man would do – he leaped off stage to pet the little guy. He told his fans, "God, dogs, they’re such great animals. I really can’t say enough about dogs, I’m a dog lunatic."

The topic was brought up again in a recent interview...

ET's Keltie Knight sat down with the actor to discuss his new murder mystery film, Knives Out where he was talking about his bond with his own pup, Dodger.

And it turns out that this love is the reason behind Evans finally getting an Instagram account.

Yep, you heard that right - Chris Evans now has Instagram!

His first post was an acknowledgment of a viral challenge that Chris Pratt put him up to...

He is raising money towards the global pandemic, and if this doesn't make us love him more, we don't know what will!

Even though Evans hasn't posted much yet...

He uploaded this photo of the home quarantine haircut he gave Dodger, which didn't turn out exactly the way he hoped.

And not forgetting this adorable snap...

And last week, he appeared on The Tonight Show Starring Jimmy Falon.

Evans spoke about his disastrous attempt at trimming Dodger's fur: "I had done it once before, right when quarantine began. I gave him just a little bit of a trim, and it went great! So I got a little bit confident and put on a shorter attachment."

He added that even though he felt like an old man, he just couldn't waste all those good photos of Dodger that are on his phone.

"I guess I caved, I feel like such an old man. You know what it is? I had too many good pictures of my dog. I was like, they're being wasted in my phone!"

And we can only imagine that number is going to grow and grow... following the cute pics of Dodger, of course!

Shiloh Jolie-Pitt Has Changed Her Name and Completely Reinvented Herself

Gabby Petito’s Body Believed to Be Found after Going Missing