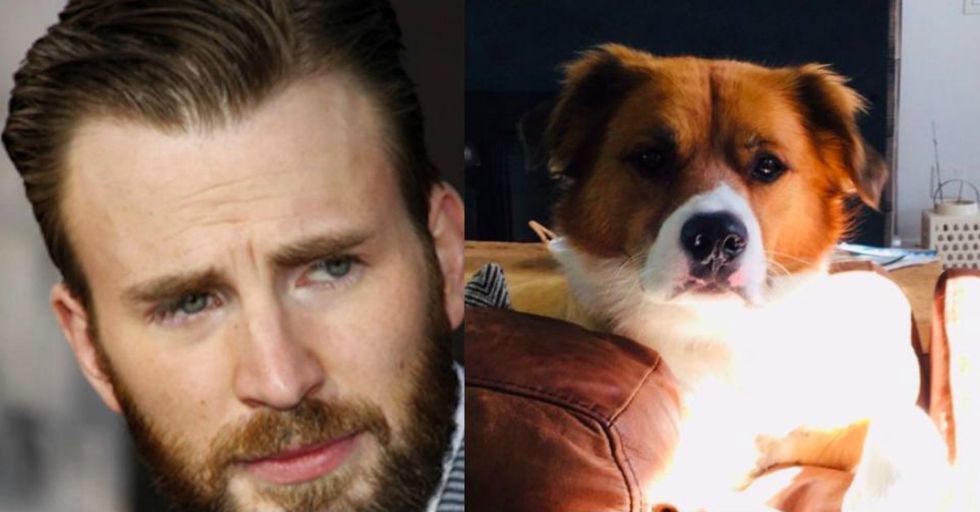 Actor Chris Evans is no stranger to publicity. The Captain America actor is a constant presence on Hollywood hot lists, and his relationship with actress Jenny Slate endeared him to us even more. Now, his dog, Dodger is fast becoming the social media celebrity.

This is Dodger, Chris Evans dog.

Evans rescued Dodger from the pound because he literally couldn't deny that face. “One of the last scenes we were filming was in a pound, a kennel," Evans told PEOPLE. “I foolishly walked in and I thought, ‘Are these actor dogs or are these real up for adoption dogs?’ And sure enough they were, so I was walking up and down the aisles and saw this one dude and he didn’t belong there. I snagged him and he’s such a good dog. They aged him at about one, he acts like a puppy, he’s got the energy of a puppy, he’s just such a sweetheart, he’s such a good boy. He loves dogs, he loves kids, he’s full of love."

Dodger is not only full of love, he's heart-meltingly cute. Everything he does is just so darn adorable you just can't help but stop and stare.

'Excuse me, are u busy? Could I interest u in chasing squirrels with me outside? Or perhaps u could toss the frisbe… https://t.co/MTrbrIHEVU
— Chris Evans (@Chris Evans)1500124859.0

Look at that face. Just look at it! How can you say no?!

Now, Dodger is back with a video that's sure to melt your hearts.

Dodger's stuffed lion plays The Lion Sleeps Tonight whenever you press it, and this time, Dodger decided to sing along. To be fair, you can't hear that song and not sing along. It's just not possible.

Even more adorable, Evans is with Slate, his ex-girlfriend, and both can't stop laughing. "It's like magic!" she says at once point.

Rumors of a reconciliation between the two have been flying lately, but nothing has been confirmed. Still, it's nice to see them back together on good terms.

Then again, Dodger is very, very good at reconciliations.

After Evans was gone ten weeks for work, Dodger was so excited he jumped all over him, gifting us this adorable video. Dogs, they really are man's best friend.