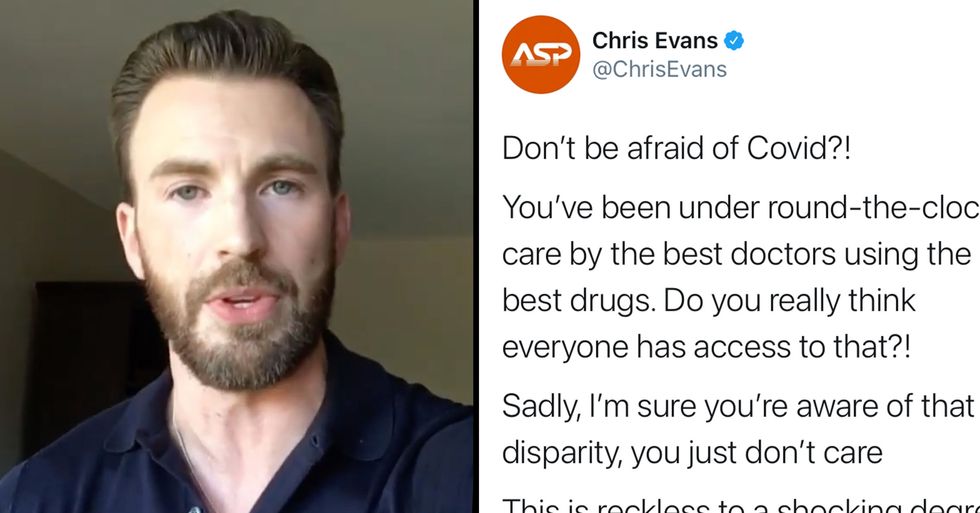 He is not impressed.

The Captain America actor didn't hold back with publically slamming the President for his "reckless" and "shocking" words regarding the virus.

Now, we were first given the shocking news of Trump's covid diagnosis on Friday, October 2nd.

Immediately after his diagnosis, the President went into self-isolation.

But the White House put many worries to rest.

And could be seen waving to his fans and supporters.

"Shouldn't he be self-isolating for fourteen days?" "Isn't he putting his driver and his staff at risk of catching the virus?" "What is he doing?"

But then, shortly after the photos, Trump came forward with a shock announcement.

And, just to add to the backlash...

Actor Chris Evans has now weighed in on the situation.

In his anger, he tweeted this:

"Don’t be afraid of Covid?! You’ve been under round-the-clock care by the best doctors using the best drugs. Do you really think everyone has access to that?! Sadly, I’m sure you’re aware of that disparity, you just don’t care This is reckless to a shocking degree, even for you." He has a point...

Trump is yet to respond to the backlash surrounding his announcement...

But we will be posting updates accordingly.