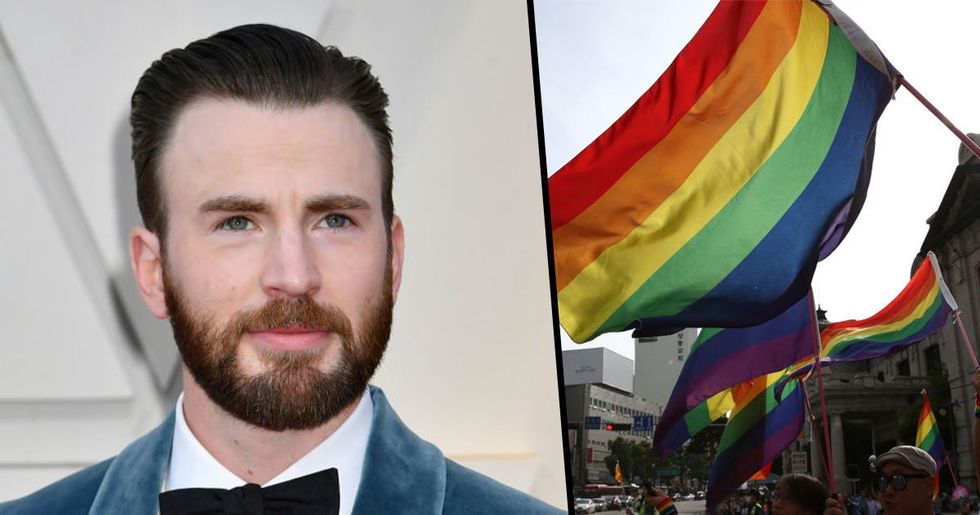 Chris Evans has just made himself even more likable by slamming the homophobic individuals who were attempting to plan a "Straight Pride" parade in Boston...

Let's take a quick look at the history of Gay Pride...

Gay Pride (also known as LGBTQ+ Pride) has been going on for years to allow the LGBTQ community and those in support of the community to celebrate their acceptance and equality.

The spontaneous demonstrations held by members of the gay community in 1960s New York City helped lead to the gay liberation movement and the modern fight for LGBT rights in the United States.

Amazing progression has been made over the last fifty years.

The LGBTQ community is bigger than ever today and levels of acceptance are, thankfully, growing.

Despite the growth of acceptance towards the LGBTQ community, discrimination and hate still exist. It's absolutely mind-boggling as to why, but hundreds of thousands of people have been abused and/or killed over the years for being part of the community.

This harsh reality is exactly why we celebrate Pride every year.

Pride is celebrated in June every year to shine through the hatred and to offer support to each and every member of the community.

So what about "Straight Pride"?

The internet has been left baffled and confused as to why three men from Boston are attempting to plan a Straight Pride parade, complete with banners, floats, and vehicles, which is scheduled to be held in August this year.

The organizer claims that it has been planned to mock "identity politics".

The organizer of the parade, Mark Sahady, stated via Facebook comments that the parade is tended to "mock identity politics" of the "politically left". He went on to say in further comments, "If you get victim status then you are entitled to celebrate yourself and expect those with oppressor status to defer your feelings".

Because that makes all the sense in the world...

The parade, if it goes ahead, will be an event fronted by a far-right group founded by Kyle Chapman.

The parade will be fronted by Kyle Chapman's notorious far-right group, Resist Marxism, which is known for its violent right-wing protests.

Is anybody else getting a very uneasy feeling about this whole organization?

People have taken to social media to express their anger.

So it turns out, people are not happy about Straight Pride and they are using social media as a platform to unleash hell upon the organizers. For instance, Dan Reynolds has advised the group to "not waste the world's time and attention".

It's caused nothing but frustration and outrage.

This Twitter-user took to social media to express her anger over a horrific situation that, sadly, so many members of the LGBTQ community find themselves in every day.

This Hollywood dreamboat has voiced his strong opinions about Straight Pride via Twitter and he hasn't gone lightly on the organization.

Quite frankly, Chris, I couldn't have said it better myself! Wait until you find out why his opinions on the matter are so strong...

He's saying what everyone is feeling.

Chris truly went to town on the organization and he even suggested that the group is homophobic, which, let's be honest, is really putting the nail in the coffin of these right-wingers.

Yet the ignorance and hate continues...

It is indeed a very sad reality that there are still people in this world who promote homophobia and hate towards the LGBTQ community, and the internet is one of the biggest hotspots for this targeting. Evans posted another tweet in regards to this, telling people to search for "empathy and growth".

He's standing up for what he believes.

Even though Chris himself isn't a member of the LGBTQ community, he has firmly stood for what he believes in and we absolutely love that.

Chris' younger brother, Scott Evans, is openly gay, so issues surrounding homophobia have always been personal for the Marvel actor.

Chris' attitude is a prime example of the attitude everyone should hold towards the LGBTQ community; it really really isn't that hard.

The LGBTQ community is bigger than ever and the support and rights for members of that community are enforced stronger than ever before. Straight Pride is something that shouldn't, and hopefully, won't be happening any time soon. Gay Pride exists as a somewhat happy consequence of the oppression that the community has, unfortunately, had to endure; no straight person has been abused or denied rights as a direct consequence of their straightness so, therefore, a Straight Pride Parade just isn't necessary. We stand firmly with Chris on this one.