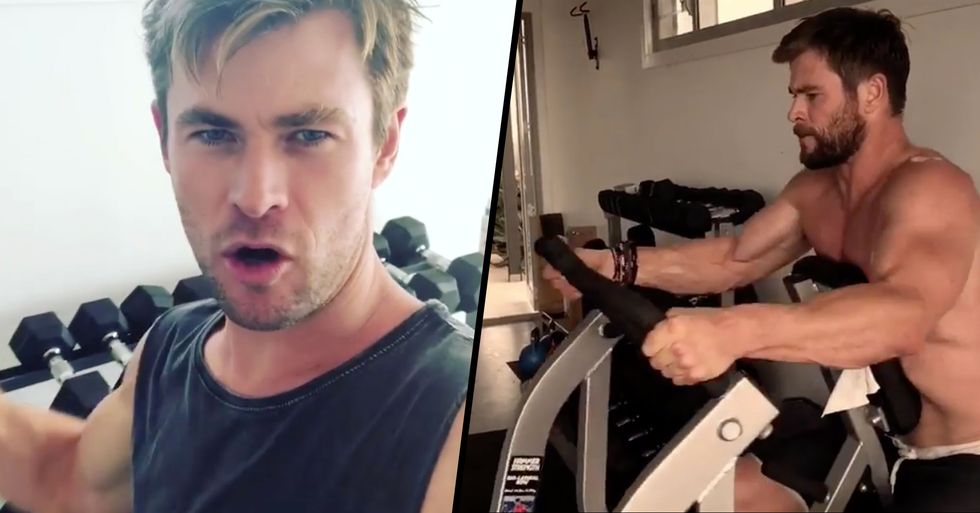 But now it seems the actor is keen on giving back to the community. Keep scrolling to learn more about his generous act and how you could win a workout with Thor himself.

Some of these shows included the likes of fantasy TV series, Guinevere Jones, and popular soap opera series, Home and Away, in 2004.

He is unbelievably fit.

Appearing in horror movie, The Cabin In The Woods, in 2012 allowed Chris to take a step away from the superhero role and step into something completely different.

According to Chris, if it wasn't acting, he would have be writing or directing.

Despite being super busy over the years, Chris has made time for his private and personal life.

How did Chris meet his wife?

Chris was introduced to Spanish actress and producer, Elsa Pataky, in early 2010 by talent agent, William Ward. A mere 3 months later, the couple were newly-weds.

They're obviously doing something right!

They look like they're going strong and are as loved up as ever.

The couple have since had 3 children.

Their first daughter, India Rose, was born in 2012 and their twin sons, Sasha and Tristan, followed in 2014.

"Having children has taken the edge off the wild world of celebrity," Chris said...

According to People, Chris spoke to Elle in 2015, describing having children as something that has: "certainly [kept] my feet planted on the ground - I've been able to bypass a whole lot of garbage and traps that I could have fallen into"

Could he be any more perfect?

Which brings us onto the star's latest act of kindness...

The star is raising money for a community hugely in need right now.

We're all familiar with the bushfires that are currently still raging in Australia...

And it seems the Aussie actor and his wife want to do their bit to help.

The actor is auctioning off an hour workout session with himself and his wife...

The auction aims to raise money for firefighters that are currently battling the relentless bushfires.

Hemsworth's workout session is part of a huge project...

The Make It Rain Fire Appeal Festival is set to feature musical performances from the likes of legendary Australian artists like Wolfmother and Bernard Fanning.
The event invite says: "A handful of your favorite Australian artists are inviting you to join them for two nights of entertainment in the heart of picturesque Byron Bay, this January, to raise money for the NSW RFS Northern Rivers and Far North Coast Brigades."

There will be other things to bid on too...

Including an "original etching from award-winning artist Ben Quilty, a tennis lesson or game for three with Pat Rafter, a songwriting session with ARIA Award winner Bernard Fanning and a surfing session with Joel Parkinson and Mick Fanning."

We're sure you're dying to know how to get involved...

The music festival, where the bidding on working out with Thor himself will take place, is set to kick off early next year. Those who are able to get to the Byron Bay area can buy tickets now. For more on why causes like this are so important, keep scrolling to get all the latest details on the bushfires, including the horrific impact on the wildlife