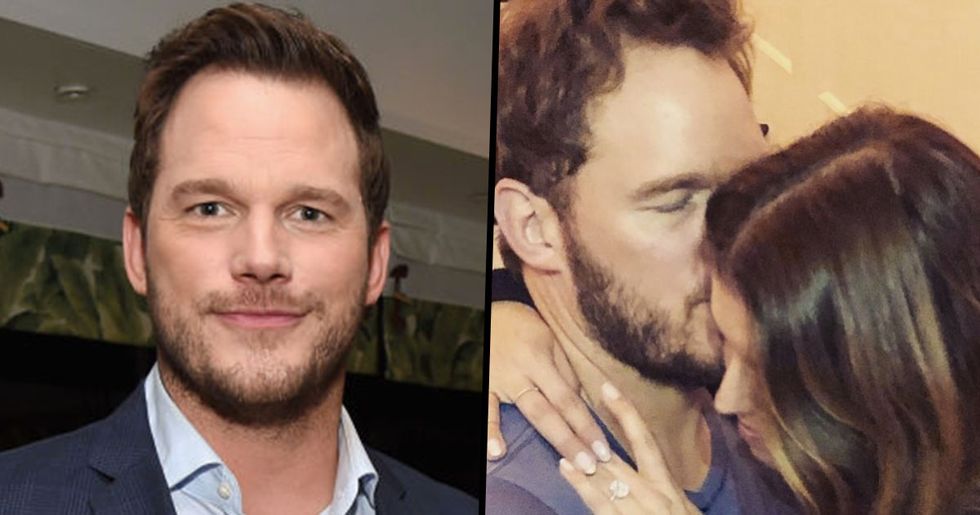 Everyone's favourite dad bod Chris Pratt has announced his engagement to Arnie's daughter, Katherine Schwarzenegger on Instagram. While it's believed the pair have been dating for around seven months, they only went public with their relationship a month ago. And now the pair are ready to make it official. Pratt posted some very cute snaps on his social media on Monday.

Pratt has famously been married before, to actress Anna Faris. The couple were seen by the internet as the definition of couple goals, and have one son together. Their split seems amicable, which is something worth celebrating in today's drama-filled world. Faris is also dating someone new - cinematographer Michael Barrett.

While the relationship hasn't always been smooth sailing, and the internet has mixed feelings about the pairing, we're wishing these two the very best for the future.

Chris Pratt is one of the biggest stars in Hollywood right now.

He was discovered while waiting tables at a shrimp restaurant.

His is a true rags-to-riches story, and he is now a household name with tons of critically acclaimed acting credits. Here he is pictured at Comic Con in 2018.

He has many other popular acting credits.

Another hugely popular film Pratt starred in is Jurassic World. In it, he plays velociraptor trainer and movie hero, Owen Grady.

Although for long-term fans, Pratt is most famous for another role.

He rose to fame on NBC sitcom Parks and Recreation as Andy Dwyer. The hapless but lovable idiot became a fan favourite, and Pratt won a Critic's Choice Television Award for the role.

Chris Pratt is famous for more than his acting, though.

They played love interests in the 2007 film, and sparks clearly flew, as they become engaged in 2008, and married in Bali, Indonesia in July 2009.

Faris and Pratt have a son together.

Jack was born in August 2012, nine weeks premature. Though he suffered some difficulties at birth, he's now doing great, and is pictured here with his parents in 2017. They're celebrating the unveiling of Pratt's star on the Hollywood Walk of Fame.

Pratt and Faris were the internet's favourite couple.

This Buzzfeed article sums up the public's feelings on the pair - essentially, that they were the very definition of couple goals.

The two were very much in love.

Often the pair took to Twitter to talk about how crazy they were about each other.

But, unfortunately, love couldn't last for the two.

In August 2017, the pair announced their official separation on Twitter. In December, Pratt filed for divorce, and the divorce was finalised in October 2018.

People were deeply saddened by the news.

Seeing such a perfect couple fall apart was hard to watch.

Weird though it sounds, we often rely on these celebrity couples to prove that love really can exist. When it fails, it can rock all of our foundations.

Of course, Pratt is also famous for another public relationship.

His character's on-screen romance with April Ludgate (played by Aubrey Plaza) was one of the defining storylines of the show.

The two misfits captured the hearts of the audience.

Everything they did, they did it their own way. And that included getting married pretty much as their first date.

Which brings us to Pratt's latest relationship.

The star has been involved with Katherine Schwarzenegger for the past few months. Here they're pictured on holiday together.

He shared the news on Instagram, saying "I'm thrilled to be marrying you!" The picture shows the couple cuddling up and Schwarzenegger showing off her giant ring.

The couple only went public with their relationship a month ago.

Eagle-eyed ans had suspected the couple were together for a while.

A relative of Chris Pratt shared this image of the pair in September. We're guessing things were already pretty serious if Schwarzenegger was meeting the family.

The 29-year-old is the daughter of icon Arnold Schwarzenegger and journalist Maria Shriver.

Schwarzenegger is a writer and activist.

Her 2010 memoir and self book was titled Rock What You've Got: Secrets to Loving Your Inner and Outer Beauty from Someone Who's Been There and Back. She followed it up with a career advice guide in 2014, called I Just Graduated . . . Now What?

The couple's new engagement has become a big story.

Their whirlwind romance (plus their initial secrecy about the pairing) has captured the interests of fans and media outlets alike.

The internet had some mixed feelings about the situation.

Chris Pratt is engaged to Katherine Schwarzenegger . I am still not over the fact that Chris Pratt and Anna Farris… https://t.co/XZ0anEMaud
— Ishaaaaaa (@Ishaaaaaa)1547467352.0

The fact that the new engagement followed the split of one of the internet's favourite couples was bound to make things a little tricky.

Some felt too sorry for Anna Faris to celebrate.

I liked Chris Pratt's engagement announcement picture but then I remembered Anna Faris and I went back and unliked… https://t.co/tFPIYurqw9
— fuchi (@fuchi)1547452082.0

Even though Faris is currently also in a new relationship, the news of Pratt's new engagement can't have been easy for her to hear.

The speed of their romance, plus the fact Pratt has come out of one of the public's most beloved relationships fairly recently, meant news of the couple's engagement was never going to be easy.

We can totally see why there have been more ambivalent reactions to the news.

When a couple, like Faris and Pratt, is so intensely in the public eye and their relationship is so entrenched in social media, it can start to feel like we're also a part of it.

It's important to remember that at its core, this is a story of love.

It's impossible to judge a relationship from the outside, and based on Pratt's and Schwarzenegger's actions, they seem to be extremely happy together.

So we say congratulations to the couple.

We hope the pair have a very happy engagement, and an even happier marriage!