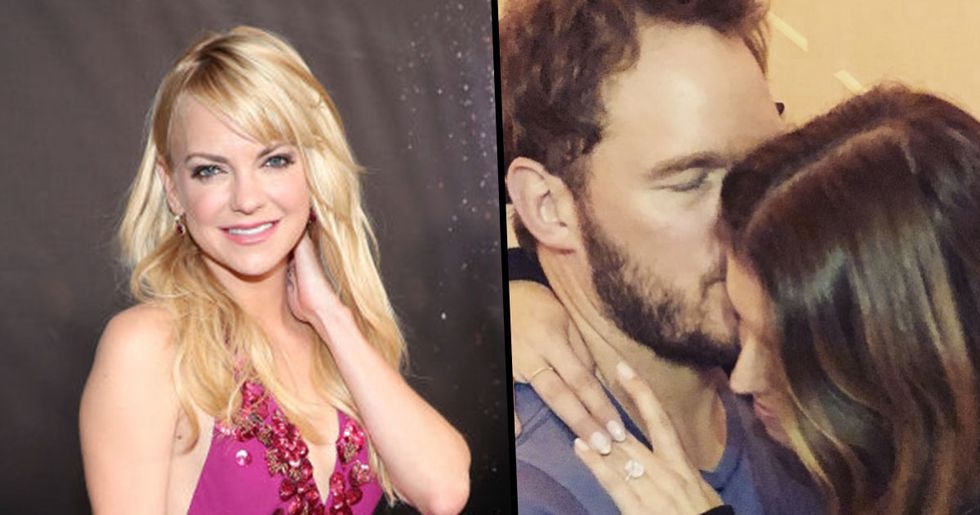 Chris Pratt and Katherine Schwarzenegger are the latest celebrity couple to announce their engagement. In fact they announced it via Instagram.

Anna Faris, who separated from Chris Pratt in 2017, also informed the world about the engagement via her podcast. She said that Chris was courteous enough to not leave it to the media to tell her. Instead he sent her a text to let her know.

She couldn't be happier for them and is very content to welcome Katherine to their family. And what a family it is that is coming together. With famous faces left, right and centre in this union, let's hope they are all ready for the flashing cameras that are sure to follow them.

On Monday night, Chris Pratt made an announcement to the world via Instagram.

He had proposed to his girlfriend Katherine Schwarzenegger. She said yes, and now the two are able to start planning their wedding.

The pair haven't been dating for that long.

The first time the paparazzi caught this couple on camera, and brought them to the attention of the public, was back in June. They were in Santa Barbara having a picnic and rumours began flying.

Katherine is somewhat used to being in the public eye.

Katherine is a published author. She wrote her first book when she was just twenty-one. It’s called 'Rock what you've got: Secrets to loving your inner and outer beauty from someone who's been there and back.' This book discusses how she was able to regain control of her physical and mental health through yoga and exercise.

And that's not all that she's achieved.

Just four years later she brought out her second book, a survival guide for graduates titled 'I just graduated… Now what?' Then in 2017 she brought out a third book, for children, called 'Maverick and me'. This one is about the benefits of adopting and rescuing pets.

Katherine is also involved in a lot of charity work.

Perhaps unsurprisingly after her most recent book, Katherine is an ambassador for the American Society for the Prevention of Cruelty to Animals. Chris is also involved in a lot of charity work. In particular, he makes special visits to hospitals around the country.

Her mother is a Kennedy.

Maria Shriver was an anchor for the CBS Morning Show and NBC News's Sunday Today through the 80s. She has also been publishing her work since she released a book in 2000. More recently, she has been working on The Shriver Report, published in 2010 and 2014. It looks at the impact of women in the workforce.

And we have a sneaky suspicion that you already know who Katherine's father is.

Arnold Schwarzenegger, Katherine's father, was a body-builder in the 60s and 70s. He was actually crowned Mr. Universe when he was just 20 years old.

Imagine if your father was the Terminator?

Arnie played The Terminator from 1984 through to 2015. It's always intimidating meeting the in-laws, but this would take it to the next level.

Arnie was in a number of films through the 80s and 90s.

After the success of The Terminator, he became something of a Hollywood icon. Running Man, Total Recall and True Lies are just some of the other classic films that Schwarzenegger starred in.

Since his arrival in the States in the 60s, Schwarzenegger has always declared himself to be a Republican. But although he was outspoken about politics, few expected this Austrian body-builder to succeed with a career in American politics.

But Arnie surprised everyone by being a serious candidate.

Not only did he enter office in 2003, but he won the election again in 2006 so he was able to serve a second term. He described himself as fiscally conservative but socially liberal. This led to his political view gradually seeming more central. Many thought that he might try to run for Senate, but he did not. This was the end of the line for his political career.

From having a Kennedy as a mother, to having Mr Universe/ The Terminator as a father, Katherine is certainly used to being part of a famous family. But is she ready for the media attention that being with Chris Pratt will bring her?

Chris Pratt first grabbed our attention when he was in The O.C.

Chris played the role of Ché in season 4 of The O.C. He was Summer's hippy college friend who encouraged her to be an activist. Although Chris was great in this role, most people were just waiting for him to get out of the picture so we could return to enjoying the dialogue between Seth and Summer.

But he found real notoriety for his role as Andy Dwyer.

From 2009 to 2015, Chris Pratt starred in the hit sitcom Parks and Recreation. Also starring Amy Poehler and Nick Offerman, this show follows the lives of public officials trying to improve their small Indiana town.

Then he entered Hollywood in Guardians of the Galaxy.

In this role he played Peter Quill. He was a human who was raised in space and met aliens along the way who helped him save the world. It is a bit more comical than most sci-fi films, and includes a lot more singing and dancing than usual.

In recent years Chris Pratt has been very busy.

Chris has been releasing hit after hit in the movie world. He was the lead role in the re-make of Jurassic World, running away from dinosaurs. And his role alongside Jennifer Lawrence in the Passenger was amazing.

And in this year he'll be releasing even more blockbusters.

Chris Pratt has entered the cartoon world and is the voice of Emmet Brickowski in the Lego movies. Who would have thought that a cartoon animation of plastic toys could be so funny?

Chris Pratt has been married before.

Before meeting Katherine, Chris was married to Anna Faris. They had met on set on Take Me Home Tonight and What’s Your Number?

Anna Faris was already a well-established actress by the time she met Chris Pratt.

In 2000, Anna had a starring role in Scary Movie. This spoof horror series re-enacted scenes from famous horror scenes. It was in this role of Cindy Campbell that people started noticing her excellent timing.

She was immortalised through her role in Friends.

Anna Faris was in the final series of Friends. She played the small-town pregnant lady, Erica, whose children Monica and Chandler were adopting. Her character wasn't so smart and most notably, hadn't realised that she was pregnant with twins.

And of course her role in The House Bunny .

Anna Faris was hilarious again her role as an exiled Playboy Bunny. This was also one of Emma Stone's first roles, as she plays a nerdy college student who Anna Faris tries to change so that she's more like a Playboy Bunny.

Now she is in starring in the sitcom Mom.

Since 2013 Anna Faris has been starring opposite Allison Janney. It is a tri-generational show that deals with real issues in a comic way. It is also unique in not having any long-running male protagonists. Instead it is a female centric show that brilliantly showcases female comedy and issues.

Chris Pratt and Ana Faris were together for over a decade.

After first meeting back in 2007, the pair got engaged in 2008. Their wedding was a spontaneous, small ceremony after eloping to Bali.

In 2012 their family increased.

Anna and Chris have a son together, Jack, who is currently five years old. He was born nine weeks prematurely and weighed just 3lb. At the time the doctors thought that he would struggle through his life, but the only ailment he has is a need for glasses. That's definitely a good outcome!

But eventually their time as a couple was over.

In 2017 Anna and Chris separated and they filed for a divorce after five months apart. It looks like this one just wasn't meant to be.

But it's cool, they’re still friends.

Some couples break up and struggle to remember what they could ever have seen in each other at the start. Luckily Chris and Anna aren't like that. They're still friends and just want the best for each other.

It was nice that Chris let Anna know in person rather than leaving it to the press.

It can be easy to back away from difficult conversations and hide behind others. But Chris didn't do that. Anna revealed on her podcast that Chris text her saying, "I proposed to Katherine last night," to which Anna replied "Ahhh that's amazing." Seriously wholesome vibes guys.

Anna wants to be the minister.

Anna let people know via her podcast that she had received the news and was very happy for them. She also reminded them that she in fact an ordained minister. How great would it be to have Anna Faris marrying you?

Hopefully Chris and Katherine can have a happy marriage together.

It looks like Chris Pratt and Katherine Schwarzenegger are all set for a happy marriage together. They've both had successful careers to date and look like they are still on the rise.