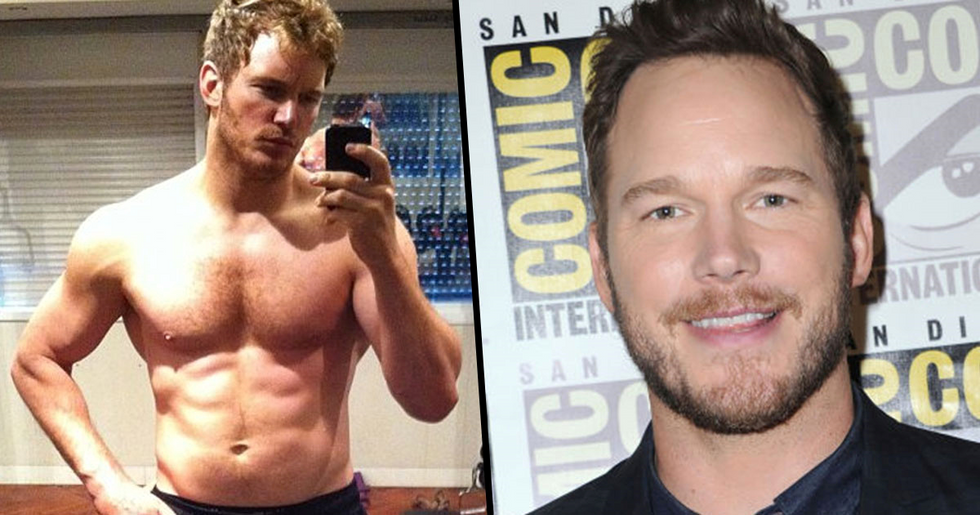 Chris Pratt's Dad Bod Is Back And People Are In Love

Chris Pratt is the kind of guy you can imagine being your husband, or like, a really good dad. He's hot because he's approachable and looks like he knows how to relax and enjoy himself.  So recently, Pratt surprised and delighted fans when he was spotted on a holiday in Cabo, Mexico looking like his lovable old self (pre-Star Lord). It seems that Chris is back to embracing the "Dad Bod" physique.

Could this be down to his newly loved up status with girlfriend Katherine Schwarzenegger, daughter of the legendary Arnold Schwarzenegger?  Perhaps.

Dedicated Chris Pratt fans will remember him from back in the day before his fame reached dizzy heights with Guardians of the Galaxy and Jurassic World, when he was playing Andy on Parks and Rec and they are rejoicing that he has returned to the land of the normal man.

Let's see exactly what they had to say!

Oh Chris Pratt. How do we love thee? Let us count the ways.

Sexy, kind, down to earth and just the kind of guy who seems to get women and what we want.

We loved you in Parks and Recreation.

We could watch these all day and still not tire of the young, slightly awkward looking Chris Pratt. And we love how he stayed faithful to this show even when Hollywood beckoned.

We loved you even more in Guardians of the Galaxy.

Star-lord we would follow you anywhere. Even half way across the galaxy. And back if you asked nicely. And stayed shirtless.

You proved you are not just a pretty face in Jurassic World.

Chris wowed us in the Jurassic Park re-make, Jurassic World. Strong, sexy and kind to animals (well dinosaurs) but we're not picky.

You showed us your funny side in these Passengers bloopers.

No wonder the onscreen chemistry was so electric between Jennifer and Chris in this film, he looks a right hoot. Not that we expected anything less.

Although we are not so sure about baby Chris Pratt.

Chris was definitely a dead (excuse the pun) ringer for Chucky from Child's Play as a toddler. That's spooked us right out.

And of course you have always shown your appreciation for your fans.

We could never imagine Chris being too busy to sign an autograph or pose for a picture. Fingers crossed we bump into him at his next red carpet event.

It seemed like a match made in heaven when he married the hilarious Anna Faris.

But sadly this love affair was not meant to be and they divorced after an impressive 9 years together.

But we love how he is still a devoted father.

Chris has one son, Jack, with ex-wife Anna, who was born prematurely in 2o12. Since his birth, Chris has been a long term supporter of the March of Dimes charity that works to prevent premature births.

But we are so happy about his recent engagement.

Even if we are a tiny bit sad that he is officially off the market again. Well done Miss Schwarzenegger.

And we bet she is loving his new look.

Praise the Lord. Chris Pratt's 'Dad Bod' has officially returned and it's better than ever.

Rachel and Phoebe get it.

This is exactly what we did when we first saw these amazing pictures. Good to know we can always rely on our Friends to truly understand this momentous occasion.

This is just the kind of amazing news we needed to kick start the New Year. Best January blues banisher ever.

Chris is definitely our Prince Charming too.

If only we looked like Marilyn did and then maybe we would have a chance with the man of our dreams. (Yes Chris we are talking about you.)

All you can eat buffet.

We'll take a big hunk of beef for our main with a side order of chunky thighs, no fries. And a 6 pack of cold ones to wash him, we mean it, all down. Mmm.

Slightly worrying that this tweet came from a man but we feel you. Chris is way more sexy Daddy than boring, old Dad.

More cushion for the pushin'.

Admit it girls. Secretly we all prefer a bit of a beer belly coupled with some squishy love handles. Who really wants a gym obsessed fitness fanatic for a boyfriend?

Ahh Chris you can give us a cuddle any day.

One of our favourite features of the Dad bod; the beer belly. Perfect for resting our weary heads on or even for balancing a nice glass of Pinot on. You couldn't do that with rock hard abs.

Normal men can rock the dad bod too.

Not quite the Dad bod that Chris is rocking but we admire your enthusiasm. Keep fighting the good fight for real men everywhere.

But some men are confused.

What exactly is a Dad bod? I am a man and I have a body but I don't seem to be getting the same attention as Chris? Sadly no other man ever will.

And does Chris really have one?

Some are even doubting whether Chris even has a Dad bod. Yes, he has piled on a few pounds but he's not exactly on his way to Michelin Man territory yet. Thank god!

Some men just don't get it.

I told my SO about my dream with Chris Pratt. He laughed when I told him it was early seasons of Parks and Rec Chr… https://t.co/wVGSITtpYB
— Abbi Tanner (@Abbi Tanner)1531334006.0

And some are just jealous. Plain and simple.

Yes but we are sure you don't have the face of an angel, an amazing acting talent and the ability to make us laugh simply being you.

Where can I learn this super power?

Chris Pratt had apparently gained a lot of weight and there are multiple articles dedicated to how hot his "dad bod… https://t.co/yC0IXuS19m
— Joey Harris (@Joey Harris)1546923093.0

Chris is no stranger to becoming a superhero (albeit a slightly unorthodox one) but in real life he easily transforms into "Hot Bod Dad." And men everywhere are gagging to get in on this action.

Others are more concerned about how it might affects his film career (yawn).

so if chris pratt's dad bod is back, that definitely means they're killing him off in the next avengers, right?
— bailey meyers (@bailey meyers)1546910722.0

Sleep sound gentleman. Chris has whipped himself quickly into shape before and we are sure he will do it again. Just let us have our moment with his new bod.

Chris Pratt isn't the only Dad bod we covet.

Vince Vaughn is one big hunk of a man and we love him for it. Dressed in a suit (even a Santa one), a pair of swimming trunks or even in his sweats, he never fails to get our blood pumping.

And of course the dashing Mr Butler.

With his brooding dark looks and Scottish accent, we don't care if you become a little softer around the edges. Then there is just more of you to love.

We'd make a sex tape with this sexy star.

As a loving husband and father in How I Met Your Mother or as an adorable love fool in Forgetting Sarah Marshall, we heart Jason Segel. And if we are completely honest, we'd very much like to do some very dirty things to him too.

He has such a Dad bod he even starred in a film called Big Daddy where he had to pretend to be a Dad. We love his goofy demeaner and laid back approach to fitness.

Let's end with a message from the man himself.

Thank you and goodnight to all my adoring fans. Coming soon: More hot dad bod pics!