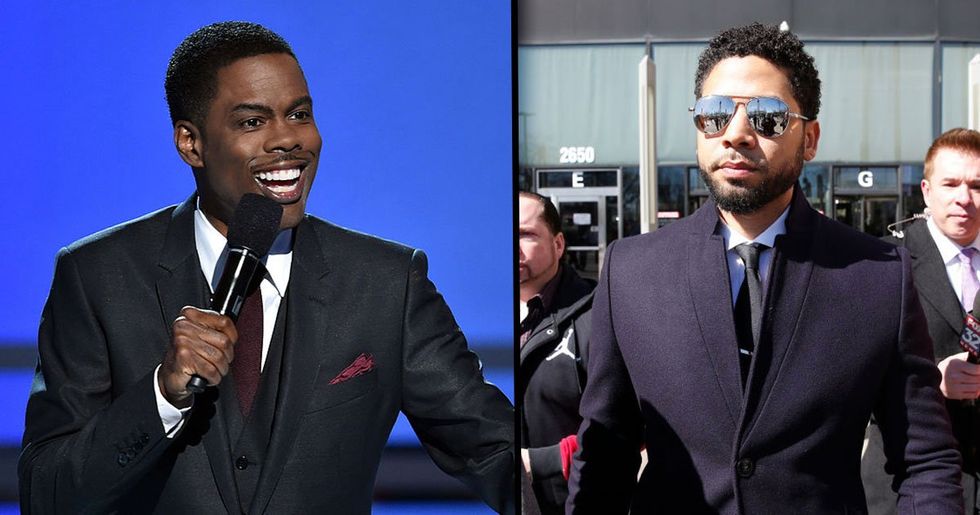 Say what you will about Jussie Smollett - and Chris Rock certainly did at the NAACP Image Awards - but you have to admit, the story that surrounds him is one of the strangest celebrity stories to have come out for a long time.

In a matter of weeks, the Empire actor has gone from break-out star to political pariah, from a proud symbol of resistance in the face of oppression to "the boy who cried wolf" of American identity politics.

The case is still veiled in a thick layer of mystery, with some viewers of Rock’s mockery laughing along with him, and others standing up to defend the disgraced actor.

Scroll to the bottom of the article to hear more about that!

For those of you who don’t know...

We think we know what he's thinking...

And we’re thinking something pretty similar - 2019 has proven a confusing and unsettling year for all of us, and it's only April!

Now, when Smollett turns on the television this is what he'll see...

You'll be getting no respect from Chris, Jussie, or should I say, Jessie…

So why is everyone being so mean to Jussie?

Well, let’s take a look at how this all went down.

This is when the alleged incident took place. Jussie Smollett, the break out star of the hit show, Empire, reported to Chicago police that he had been targeted in a homophobic, racist attack in which a noose was put around his neck and an unknown chemical was poured over him by two assailants in red hats.

He received an outpouring of support from celebrities.

Celebrities from all over the US came out in support of Jussie.

He quickly became a venerable symbol of oppression.

Things started to get a tiny bit suspicious when Jussie refused to hand over his phone.

Police wanted to use the phone to acquire evidence as Jussie reported that he was on the phone to his manager when the attack began, but Jussie wasn't willing to hand over his phone because of the private photos and voice memos that were hidden there...

Photos of people of interest who were in area of the alleged assault & battery of Empire cast member. While video d… https://t.co/wON5rJBmuM
— Anthony Guglielmi (@Anthony Guglielmi)1548898891.0

The Chicago police department released photographs of "people of interest" who were in the area at the time of the attack. But they’re little more than silhouettes.

Smollett made a rousing appearance at a concert before shouting “I’m the gay Tupac!", confusing a lot of people.

Jussie handed over a PDF of his phone records to the police, but the files were redacted; something had been covered up...

Important for media reporting: The people of interest are alleged to be in the area where a crime was reported. Th… https://t.co/1qzuFmsCCd
— Anthony Guglielmi (@Anthony Guglielmi)1550160462.0

The police found the two silhouettes from the tweet.

They were Obabinjo (Ola) and Abimbolas (Abel) Osundario, two brothers from Nigeria. Turned out, they knew Jussie from the set of Empire, where they worked as extras.

When their house was raided by police, a black face mask, an Empire script, a phone, receipts, a red hat and bleach were all seized.

Things were starting to get really weird.

On that same day…

Jussie appeared in an interview with Good Morning America.

Smollett was charged for filing a false police report.

The plot thickened when footage emerged of the Osundario brothers buying the ski masks that had allegedly been worn during the attack.

Jussie Smollett was arrested after he handed himself into the police. Police claimed that Smollett, "dissatisfied with his salary […] took advantage of the pain and anger of racism to promote his career."

Smollett was suspended from his hit show, Empire, whose rating reportedly fell substantially since the developments on February 20th.

Allegedly, Jussie Smollett paid his attackers $3,500 for carrying out the attack. Which is strange because - why would you pay them with a check?!

Sure enough, reporters got a hold of it.

Yeah, we bet they do.

He was charged with sixteen counts of disorderly conduct.

March 20th: The creator of Empire spoke out.

Whilst brushing his teeth… for some reason…

The charges against Jussie Smollett were dropped. The next day his lawyers told the world that the "case is closed."

Jussie was ordered to pay $130,000 to account for police overtime.

But the conversation continues...

Jussie is by no means out of the limelight. He’s been defended by the studio, but the national conversation rolls on.

Fox News pundits are using the case to discredit racism as a whole.

Laura Ingham somehow connected Michelle Obama to all this.

Laura Ingram spouted off against Michelle Obama - presumably for stealing the title of her upcoming book, Becoming Ingham.

And Chris Rock was reportedly told not to talk about any of this when he presented at the National Association for the Advancement of Colored People.

“They said no Jussie Smollett jokes," he admitted on stage.

Smollett was nominated for an award for his role in Empire. And Rock didn't miss an opportunity to make a joke about the whole situation. "What a waste of light skin, you know? You know what I could do with that light skin? That curly hair? My career would be outta here…running Hollywood" Hey, Trevor Noah seemed to find it pretty funny.

Jussie Smollett has not commented on Rock's comments.

Jussie has not yet responded to the act, but we're sure he's due a public appearance pretty soon.

But not everyone was critical of Jussie at the awards.

When accepting the award for Outstanding Comedy Series for her role in Black-ish, Yara Shahidi gave her opinion on the controversy, saying, simply, “I stand with Jussie." What do you think about it all?