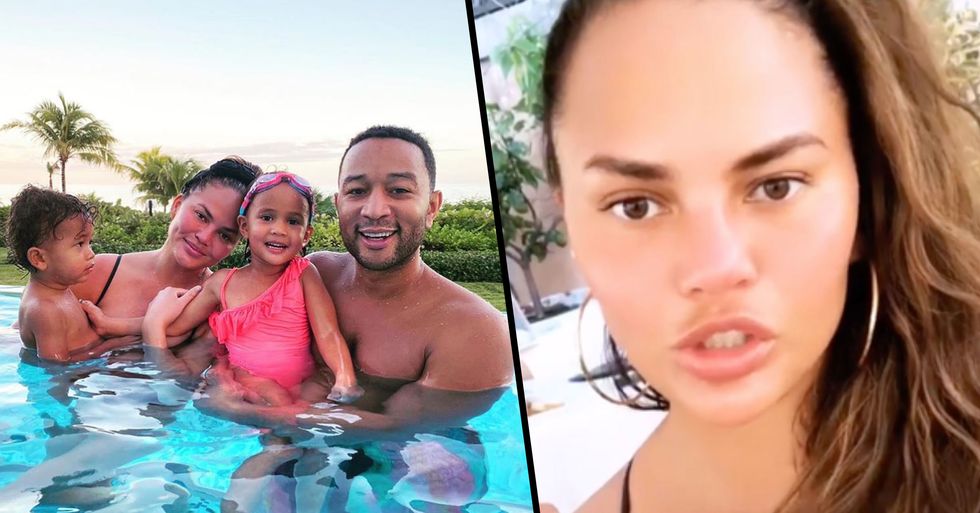 Chrissy Teigen Admits She Didn't Immediately 'Connect' With Her Kids

It's no secret that Chrissy Teigen and John Legend are relationship goals and they completely dominate the Hollywood couples scene.

They are happily married and have 2 beautiful children together, which Chrissy often documents on social media, but the mom has now opened up about how she didn't immediately connect with her children.

But luckily, everything turned out fine in the end...

And recently, Chrissy has opened up on something very personal...

In a recent interview with SheKnows, the mom opened up about how she didn't immediately connect with her children when they were born.

Chrissy admitted that the early days of motherhood were tough...

Which is what a lot of moms can relate to! "When I had my girl, Luna, I would kind of vent and complain that she didn’t feel like she was connecting with me," she said.

This was particularly hard for Chrissy...

"I felt so sad that she wasn’t connecting with me, because I’m her mother and I spend so much time with her. I’m nursing her, I’m doing everything I can for her," she continued.

Chrissy recalled her friends assuring her that things would get better...

"So many of my girlfriends were talking about how wait until you have a little boy. A little boy is going to just love on you and all he’s going to want is his mommy... But things didn't change when Miles was born."

Chrissy felt like she was the only mom experiencing this...

"I had my little boy and he wasn’t that way. And that was really tough for me to go through, just because of other mothers telling me that’s the way it was going to be," she said. "I was taught that this little boy would want nothing but his mommy, and that didn’t happen with me. And that’s when I started to realize, slowly, that there is no rhyme or reason. You just never know."

Too many women are judged on not being able to bond with their babies...

Studies have found that about twenty percent of new moms and dads feel no real emotional attachment to their newborn in the hours after delivery. Sometimes, it takes weeks or even months to feel that attachment. If a parent hasn't begun bonding with their baby, they shouldn't feel anxious or guilty - it should come with time.

This is nothing at all to be ashamed of...

And Chrissy believes that other moms shouldn't be giving advice to those struggling to establish that immediate bond.

Chrissy has even stepped back from giving advice herself...

"Even when people are well-intentioned, it can hurt a little bit. So I’ve always been very hesitant on giving advice to people, like that advice because sometimes you hear something small like that, it can really affect you," she said. "When you don’t fall into that category, it makes you feel useless all over again."

Things have now improved for the better...

"I’m so insanely connected with my daughter, and she is my baby, and we are best friends, and it’s just, it’s different," she explained, "You just never know." Keep scrolling to see John and Chrissy take a lie detector test...