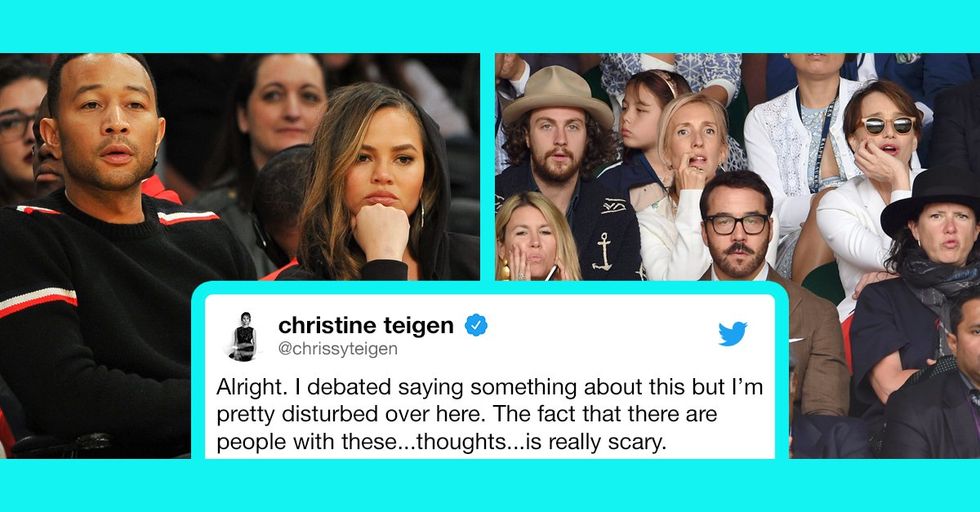 Do you remember Pizzagate?

As proof, they disseminated emails from Clinton campaign chief John Podesta, speculating that phrases in them such as "pizza" referred to underage girls, while "cheese pizza" referred to pedophiles, "ice cream" to male prostitutes and "hotdog stand in Hawaii" to sex trafficking.

The truthers even speculated that President Obama was part of the conspiracy, pointing to pictures where he played ping pong with a child and a Wikileaks email showing he spent $65,000 flying in pizza and hot dogs from Chicago for a White House event as proof.
The most interesting thing about Pizzagate was the absolute lack of logic behind the claims and the absolute refusal of its adherents to believe in facts. For instance, truthers posted pictures of secret "kill rooms" and underground tunnels beneath Comet Ping Pong on Instagram, but there was no basement under the restaurant to begin with. Even after the restaurant's owner, James Alefantis answered truther's questions and took them on a tour of the parlor, they still continued to spin their webs.
Things took a turn for the dangerous when a 28 year-old North Carolina man, Edgar Welch came to the pizza parlor armed with a handgun and military-style AR-15 assault rifle, which he used to fire rounds into the air.
No one was hurt, thankfully, and in 2017, Welch was sentenced to four years in prison over federal charges of assault with a dangerous weapon and transporting a firearm over state lines.
Now, it seems the Pizzagate truthers are back, and they've roped the most unexpected people into their shenanigans – celebrity couple Chrissy Teigan and John Legend. So what are they claiming now?

A timeline of the pizzagate fake news conspiracy, which has now roped in @johnlegend & @chrissyteigen… https://t.co/7nfKTsFE2f
— billboard (@billboard)1514932819.0

This holiday weekend, self professed "investigative journalist" Liz Crokin began posting tweets accusing Teigen and Legend of being part of the pedophile ring. She posted pictures of the couple's 20-month old daughter Luna dressed as Alice from Alice in Wonderland, and a pineapple, commenting "note the pizza emoji," to show this was incontrovertible proof the pair were part of the pedophile ring. Wait, what?! Yes, really.

Others commented "Speculation that they're both also trans on many YT [Youtube] channels. The transagenda is huge with these people and they love to fool us plebs."
The amount of hate espoused in these tweets was so horrific, it wasn't long before it came to Teigen's notice. She retweeted the posts, stating, "alright. I debated saying something about this but I’m pretty disturbed over here. The fact that there are people with these...thoughts...is really scary."

Alright. I debated saying something about this but I’m pretty disturbed over here. The fact that there are people w… https://t.co/tokYxN2mIa
— chrissy teigen (@chrissy teigen)1514676892.0

At first, Teigen tried to understand what the truthers were going on about.

...apparently dressing my daughter as Alice in Wonderland and a hot dog and having a pizza emoji on Snapchat has to do with pizzagate and being uhhhh darksided. Holy shit That thread is wild. Enjoy.

Then she expressed her fears about the situation:

Yeah yeah it’s “just Twitter" but I’m pretty sure this *sick* person is saying we are darksided pizzagate pedophiles who traffic our daughter. Ummmmm this is really scary shit.

Crokin, meanwhile, was not dissuaded from her nefarious activities, and continued bashing the celebrity to her followers.

What's not OK is trafficking kids as sex slaves which is rampant in Hollywood. Why don't you use your platform to educate people? https://t.co/KhUjd9L4L1

Chrissy you run in circle with people who rape, torture & traffic kids. This is a fact, I expose sex trafficking for a living. https://t.co/xg3uefOWSv

Teigen further noted that Crokin had an abundance of followers and was Twitter verified as well, which was, of course, severely disturbing.

Thank you, Twitter, for verifying somebody who is esentially accusing me (with pictures of my daughter) of child ab… https://t.co/nhzp9rRE35
— chrissy teigen (@chrissy teigen)1514677816.0

You need to take my family’s name out of your mouth before you get sued. https://t.co/bPTwiBAs97

He further posted a thread which explained matters for the uninitiated.

Once Legend posted the word "lawsuit," Crokin began to backtrack, theorizing that Teigen and Legend might be victims as well. Teigen, however, was not having it. She took to Twitter again, stating:

You lead people to believe WE were endangering our child. Trafficking OUR child. You posted photos OF MY child... Don’t backtrack now and say we ‘run with’ pedophiles. I am taking this FAR, Liz. Your s*** ends here... I don’t care HOW you backtrack or WHAT you deleted. I have it ALL. I’m the last person you are f***ing with. You are DONE with me and my family. You are going to court... You have been f***ing with too many people for too f***ing long with NO regard for your words and NO consequences. I’m the LAST. It’s OVER. [sic]"