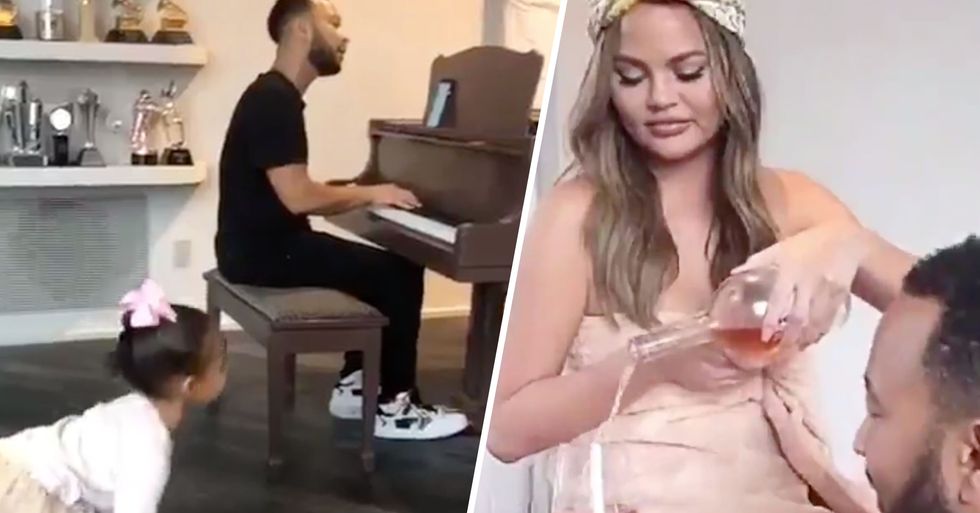 Everyone can agree when we say Chrissy Teigen and John Legend are relationship goals and they completely dominate the Hollywood couples scene.

Chrissy isn't a stranger to social media and often documents her life, as crazy as it might be, so she definitely didn't shy away when Legend invited her to appear on livestream.

But her most recent post of her and Luna is probably her cutest yet...

The pair joined John and ninety thousand others for his Instagram concert on Tuesday.

I think it's safe to say most people have dreamt of a day John Legend would sing for them.

As it turns out, dreams do come true. Legend put on the concert at home, following in Chris Martin's footsteps.

It was in a bid to provide some comfort to those self-isolating during the pandemic.

The virtual concert series is a project created by WHO.

And @GlblCtznAU called; Together, At Home: Who-Global Citizen Solidarity Sessions.

One collaboration we were all desperate to see was with two special guests that turned up a few minutes in.

They livened up his performance in the best way.

Chrissy Teigen has confirmed that she too will be there. Who knows what awesomeness and hilarity will come from her… https://t.co/64CvTCMZIM
— John Legend (@John Legend)1584405032.0

Legend had previously promised in his tweets that the pair would make an appearance, and he didn't disappoint.

Chrissy Teigen joined the stream in a bathrobe.

With the pair's eldest daughter, 3-year-old Luna arriving just in time to hear her dad's rendition of Beauty and the Beast's theme song.

It was beyond adorable.

Chrissy Teigen clearly loves her kids, but it hasn't always been easy for the new mom, she recently admitted something pretty shocking. Keep scrolling to read more...