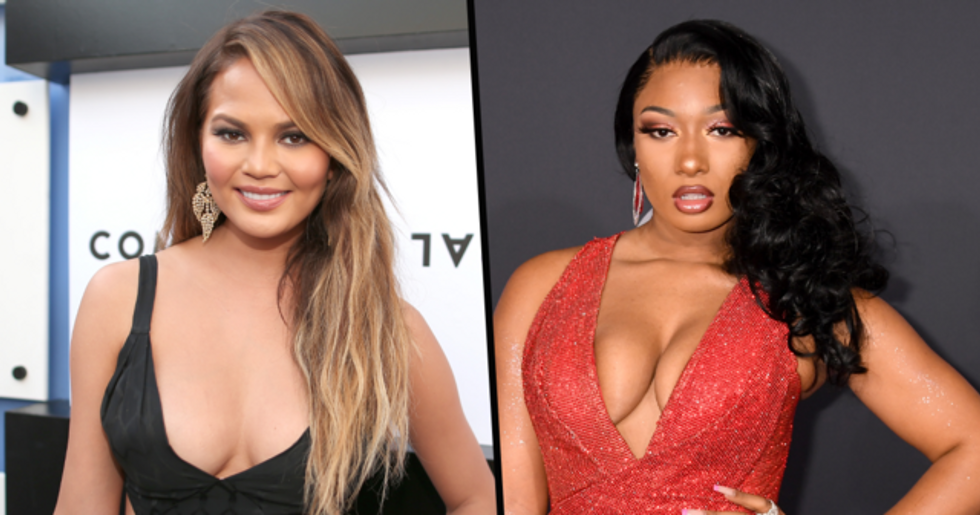 After making a "tasteless" and "dumb" joke about the rapper Megan Thee Stallion, Chrissy Teigen has issued a long and groveling apology, but not everyone is convinced by her words...

But, this week, she has admitted that she may have finally taken things too far by issuing an apology for a "dumb" comment she made about Megan Thee Stallion.

Now, normally, Chrissy Teigen and her husband, John Legend are one of the internet's most beloved celebrity couples.

Well, Chrissy is not afraid to call people out.

But, recently, she landed herself in some pretty hot water for a tasteless Tweet regarding the shooting of rapper, Megan Thee Stallion.

Chrissy partook in an online joke comparison on Friday after television writer, Nell Scovell, tweeted: "I have a Charles Manson joke and it kills."

Attempting her own play on words, she wrote:

"I have a megan thee stallion joke but it needs to be twerked on" before hastily following up with "(before u start, I love her.)"

Some of Chrissy's followers considered the joke to be insensitive considering Megan's condition...

@chrissyteigen This is fucked up Chrissy, what happened to megan the stallion was very traumatic and right now we s… https://t.co/6GHG9UeliR
— baby c (@baby c)1595649643.0

As she had only just been hospitalized following a shooting at the time of the Tweet.

But Chrissy didn't quite see it that way.

Following the backlash, Chrissy quite angrily tweeted: "I'll delete because you guys are soooo f***ing annoying. Just unfollow me you absolute tools."

Which was odd, considering her thirteen-million-strong following.

Understandably, people were very suspicious by her sudden privatization...

But, evidently, the model had used her quiet time for a little self-reflection because, over the weekend, she came forward with an apology.

"I used the play on words joke with a celeb and something they known for with meg and twerking and I should have known that it is just not the right time especially for something so dumb and s***ty and pointless as the joke was," Chrissy began, per JustJared.

"Making anyone feel reminded of a terrible time or letting you guys down sucks more than anything to me so I am sorry to Megan and anyone who thought this was about the incident at all."

And, when a fan commented that Chrissy shouldn't have chosen "someone who is in recovery and trying to heal," the model replied:

"She is known for twerking. That was my only thought behind it. it had no other intent and the shooting didn't cross my mind because my world is consumed with qanon stuff and not much else online."

She wrapped up her apology by acknowledging that not everyone will see her statement as genuine.

"You'll say someone else wrote this or that I don't mean it and that's always the punishment for having said it in the first place so I'll take it."

Megan Thee Stallion is yet to respond to the drama.

For the latest on the shooting scandal, keep scrolling to hear who the police suspect shot the rapper...