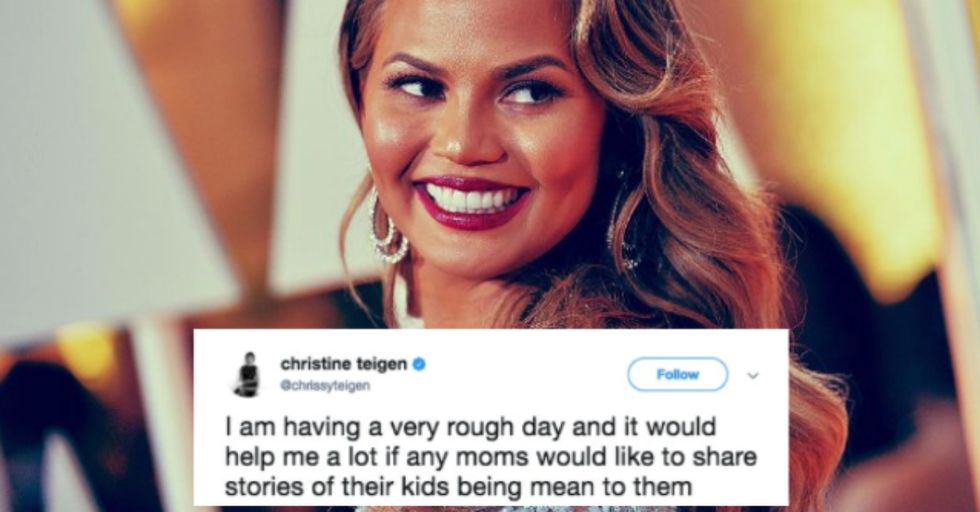 Whenever you're having a bad day, it helps to seek out things that make you happy. For some, that might mean cozying up on the couch to watch a favorite movie (When Harry Met Sally, anyone?). For others, it might mean Googling pictures of puppies in baskets (you're welcome).

When Chrissy Teigen is having a bad day, though, she reaches out to her millions of Twitter followers to make it better. The best part is that everyone's responses made our day better, too. Get ready to smile!

She has over 7 million Twitter followers, and more than double that on Instagram. It's pretty safe to say that she has a large, active social media fanbase.

So when she was having a tough day and needed a pick-me-up, she reached out to her fans.

On September 22, Teigen reached out to the moms of Twitter and asked them to share stories of their kids being mean to them. The responses were way more hilarious than anyone expected.

Moms from all over quickly began sharing their tales of woe.

Like this mom, whose son says "no" every time she goes in for a kiss. That's pretty rough.

Then there were the tales of stolen food:

This little girl is clearly going places. Like straight to her room. No way is she getting away with that!

This 4-year-old has an impressive vocabulary...

...And he knows how to use it! This was just the beginning. People had many more mean-kid moments to share with Chrissy Teigen...

Have kids always been this mean? And also this hilarious?

This kid has already chosen her favorite parent:

We get the feeling that she knows exactly what she's doing. We like her moxie.

This one goes out to all the moms who spend a lot of time perfecting their makeup look:

Ouch, kid. The makeup may not be working, but we're betting mom will put you to work if you keep up these kinds of comments!

We're going to remember this every time we hug anyone.

And this is the most vicious insult of all:

A sunburn?! That's pretty savage. Soon, even people who weren't moms started chiming in with their own stories of mean kids...

Like this girl, who threatened to make her parents' lives a "nitmare."

We recommend you listen to her. After reading these other comments from kids, we have no doubt that she's capable of making your life difficult.

This 6-year-old is already wise to the ways of the world:

He's clearly on another level. It's kind of making us wish we were 6 again so we could pull this kind of stunt.

Ice cream is cool, but you know what's cooler than being cool? Being ice cold. And this kid is. Do you have any examples of mean things your kids have said to you? Share them on our Facebook page!