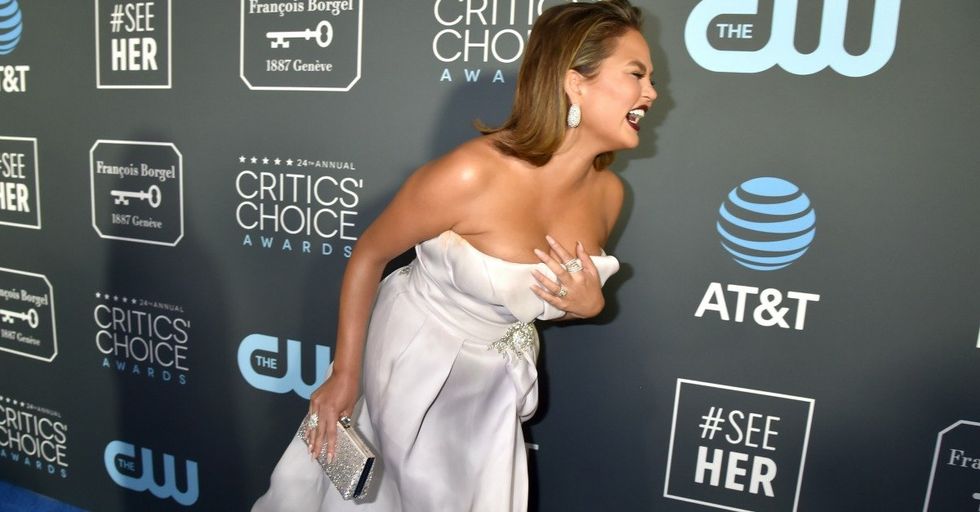 Chrissy Teigen Asked People for Their Embarrassing Stories, and Boy, Did They Deliver

We've all had our fair share of embarrassing moments. If you're like me, you like to lay in bed and replay them over and over again until you're slowly driven insane from shame and regret. If you're at all into getting eight full hours of sleep, I do not recommend this nightly ritual.

During my years as a server in an upscale retirement home, I had so many mortifying moments that they all seem to blend together at this point, but a few still stick out: The time I launched an entire tray of cranberry juice onto an elderly woman's back, when my hair clip fell onto an old man's plate and splattered fish across his shirt, when I fell down three stairs carrying two full trays in front of the entire dining room. Just revising them now is almost too painful to handle.

So let's all enjoy some hilariously satisfying stories of public humiliation, shall we?

Chrissy Teigen proves once again that she is all of us, because who doesn't love a good embarrassing story? It makes us feel better about our own transgressions.

It is a bit hypocritical of Teigen to demand that her fans reveal their most shameful moments without having the decency to reveal her own, especially considering how much she's built it up to be something truly spectacular.

I'm gonna write it on a piece of paper, put it into a sealed envelope and give it to my lawyers to tweet it when I die
— chrissy teigen (@chrissy teigen)1549833172.0

At least this gives us something to look forward to. It'll be a nice little silver lining for such a dark day. Alright, who's ready for a little schadenfreude?!

This comedy of errors in three parts

It's impressive that he somehow managed to hide this while sitting in an enclosed car with someone else. That had to have been the most terrifying ride of his life.

Luckily, we were able to find out even more of this spellbinding tale. His "sitting in silence" was clear why his ex accused him of "acting weird." I wonder if this is what ended their relationship?

And finally, the finale. The decision to throw his soiled undies out the window was a bold one, but at least he had the decency to go grab them afterwards.

So much is going on in this story that it's almost hard to process. It's amazing to me that she was able to pull him all the way down onto the ground simply while holding on to that certain appendage. No wonder he was screaming.

@chrissyteigen One time after a long meeting at work I ran into the restroom backed into a stall pulling down my pa… https://t.co/b26xrzPyep
— Jenn of all Trades (@Jenn of all Trades)1549833052.0

The worst thing about this story is that this Twitter user goes on to explain that she later had an interview with the very same woman she almost sat on in a bathroom stall. She didn't think she'd remember. She did.

@chrissyteigen When I didn’t lock the door of an aeroplane toilet properly and a few people who were waiting outsid… https://t.co/yX1dE2Qmhe
— Sophie Heawood (@Sophie Heawood)1549833289.0

It's horror stories like this one that makes me check and double-check the lock on public bathrooms every. single. time. It only takes one time for disaster to strike.

@chrissyteigen When I was at prom and my prom date said she would be right back and she never came back and other p… https://t.co/g66Dmg0Plh
— Tony Posnanski (@Tony Posnanski)1549833444.0

At least he was able to get the last laugh, right? He sure showed her!

What a roller coaster ride this story was! I have to say, I was not expecting this ending, but it's an M. Night Shyamalan-level twist.

The fact that they asked this poor man to leave the store was what made this story truly excellent. But seriously, how could they?! He clearly needed medicine more than ever!

@chrissyteigen My boyfriend (now husband) had visited and slept at my moms for the first time. We left and my siste… https://t.co/i9TIlriqp8
— Kara Goucher (@Kara Goucher)1549842841.0

If Kara Goucher's name sounds familiar, it's because she's a two-time Olympian and world-champion long-distance runner. So, you see? It can happen to anyone.

As a former server, I can see myself doing this exact same thing. And then instantly dying inside.

@chrissyteigen Doing a coffee run in a shorter red dress. As I crossed the drive thru line (coffees in hand) I trip… https://t.co/MnGpMELyUP
— Angela (@Angela)1549833700.0

This is the kind of hilarious slapstick that only skilled comedians are able to pull off. I would not be able to hide my hysterical laughter if I saw this go down firsthand.

The secondhand embarrassment is real with this one. I would probably have put in my two weeks notice immediately after this incident.

@chrissyteigen Pulling a roll of polo mints out my pocket and offering them round a group of strangers at a confere… https://t.co/Ms8eZLNJte
— Jessie Belle (@Jessie Belle)1549833096.0

I'm shocked that everyone dismissed such a generous offer! Also, why did no one tell this woman what she was actually offering? So rude.

Toddlers are like tiny drunk people with no filter. Hopefully, this restaurant was filled with parents who have seen, heard, and smelled it all.

@chrissyteigen I once credit card swiped the ass of the person in front of me. I thought it was my husband. It was not my husband.
— Sydney Paige (@Sydney Paige)1549833713.0

This woman is lucky that this stranger didn't call the cops on her inappropriate touching. Here's a tip: Make sure you have a photographic memory of your spouse's butt before trying something risky like this in a crowded bar.

I would guess that most worm-related incidents end up about as well as in this heartbreaking story. But don't let that discourage you from attempting it.

@chrissyteigen Let's see...how about the time I locked my car keys in my car during a job interview. Afterward, the… https://t.co/kOGo8xKLej
— Mindy Kinnaman (@Mindy Kinnaman)1549856084.0

This Twitter user went on to say that she ended up getting this job, which just goes to show you that there is life after an embarrassing moment such as this one.

@chrissyteigen I was on the lawn mower singing my guts out only to find that everyone could actually hear me and so… https://t.co/cqElNGCaek
— Craig (@Craig)1549848065.0

This confession pulled at my heartstrings. How dare that neighbor tell him to "knock it off?!" Let the man sing!

This is one of those stories that starts off badly and just ends up getting more and more awful.

...that just gets worse

Not only did she go to the bathroom somewhere she should not have been going, but a stranger also witnessed the entire incident and let his disappointment be made known. There's no coming back from this one.

@chrissyteigen So many, but here's one. Years ago. Met my ex's elderly great aunt while out for a walk. She went to… https://t.co/UMRjKxeWqy
— Beth Ayer Chelotti (@Beth Ayer Chelotti)1549856557.0

Can we use this example to put an end to the weird air-cheek-kiss gesture? It never goes well.

Hey, at least this guy has a good sense of humor, right? I would probably have to move immediately after this moment.

@benarmishaw @chrissyteigen Mine is also while I was a waitress. It was shortly after I started and before I learne… https://t.co/b9sI4rgD2y
— Debra Guckenheimer (@Debra Guckenheimer)1549853472.0

Let's hope it was a very hot day when this happened. At least this person probably got a free meal out of it?

@chrissyteigen tripping over someone's child while carrying their xl pizza to the table probably takes the cake for… https://t.co/BnwecXVcu8
— emily (@emily)1549837316.0

The fact that this was caught on film is truly unfortunate. There's no way she can repress it to the point of pretending it never happened because her co-workers probably play it on loop during every shift.

@chrissyteigen I worked as a waiter at a trendy restaurant in NYC during college (I had never been one before) and… https://t.co/NVgnlJKpUM
— GO VOTE (@GO VOTE)1549832963.0

It's one thing to spill a drink on a normal, non-famous customer, but Christy Turlington? And right in front of Vera Wang?! He probably should just move out of New York City at this point.