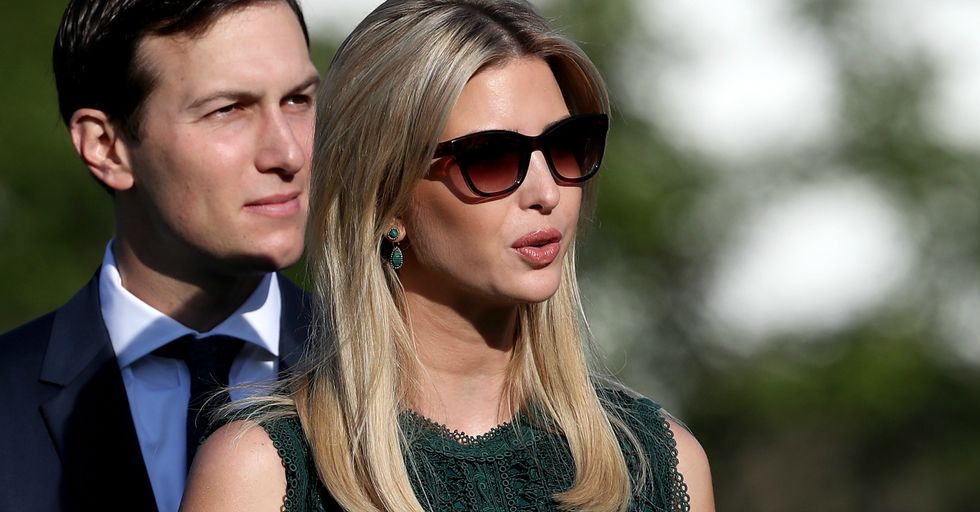 We shouldn't be surprised that Ivanka Trump isn't quite a wordsmith; look at who her father is. Even though Donald Trump has often claimed to "have the best words," he does not. And neither does his daughter.

Ivanka proved that point once again when she tweeted out a photo of her holding her baby nephew on September 19. Her accompanying caption is not only worded oddly. It's definitely 100 percent wrong.

And the Internet — including celebs like Chrissy Teigen — took notice and called Ivanka out. Hard.

She's also an advisor to the President of the United States. As such, you would expect her to be able to string a sentence together. And she can...most of the time. But let's hop aboard the struggle bus and take a ride to Word Vomitville, where we can wave to each of Ivanka's past problems with saying things that make sense.

First stop: "I don't know what it means to be complicit."

This is something Ivanka said in an interview with CBS News' Gayle King back in April. "If being complicit is wanting to, wanting to be a force for good and to make a positive impact then I'm complicit," she continued. No, Ivanka. That's not what "complicit" means.

In that same Gayle King interview, Ivanka was asked what she says to people who criticize her for not speaking out on certain issues, and Ivanka said the sentence, "I would say not to conflate lack of public denouncement with silence." Ivanka. If you do not say something out loud, you are silent. That is the definition of the word.

Needless to say, many were quite taken aback by these apparent gaps in Ivanka's vocabulary.

"Explaining away her sinister complicity with eloquent nonsense" could honestly be the tagline for the Ivanka Trump brand. "Buy these shoes. They're practical, comfortable, and will help you march your way into the apocalypse as jump-started by my father."

When Ivanka tweeted this precious photo of her holding her little nephew, the caption had people scratching their heads.

"Cuddling my little nephew Luke... the best part of an otherwise incredible day!" We added the emphasis to the word "otherwise" because it is definitely not used correctly. And the Internet agrees...

It just doesn't make sense the way she wrote it.

It's a strange sentence. Her use of the word "otherwise" makes it seem like she either actually had a bad day or she actually doesn't like holding her baby nephew.

It's almost as if this kind of gaffe has happened with Ivanka before.

So far, the list of words she has trouble with is "complicit, silence, and otherwise." Repeat after me, Ivanka: "I must break my silence on issues I believe in, otherwise, I will forever be branded a complicit pawn in my father's tragic, evil administration."

Isn't that a novel concept? Words that Ivanka and Donald Trump say have actual, tangible consequences in the world. But the Internet wasn't done yet. Even a few celebrities got in on the action...

Chrissy Teigen can always be trusted to clap back with hilarity.

"'Otherwise' implies you did not like hangin with this baby," she wrote. But that can't be true...

Look at her face. Look at that pained smile on her face. Maybe Ivanka really can't stand "hangin with that baby." I don't blame her. Babies don't do much.

George Takei couldn't let this gem slip through the cracks.

The tweet seems like a simple mistake, and it was. But the larger issue is that to the Trump family, words mean very little. You can tell by all of Donald's rescinded promises and by Ivanka's seeming rejection of the actual definitions of English words. This family is not above language. And we need to hold them accountable, otherwise, everything is going to (continue to) crash and burn.