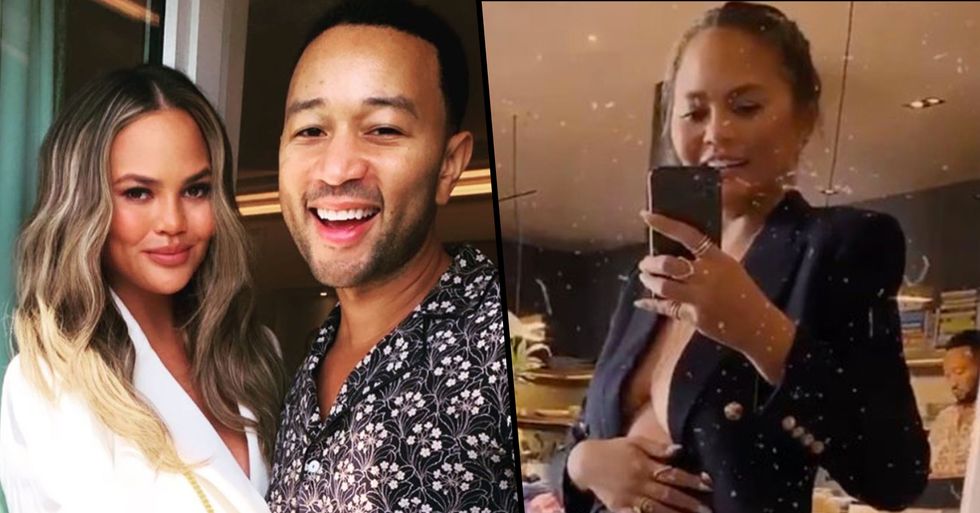 Following the backlash surrounding her pregnancy announcement, Chrissy Teigen has explained how she found out she was pregnant and it's "quite the story"...

They're one of our most beloved celebrity couples - and they came through with a very exciting announcement last week.

In fact, many had the exact same complaint about the news.

Chrissy has opened up about how she found out she was pregnant, and it's quite a ride...

Yep, they made their exciting announcement last week...

The video was for John's new track, "Wild."

And it shows the couple frolicking around on a white linen bed on the beach.

Following all the backlash...

Chrissy decided to open up about how she found out she was pregnant.

She took to Twitter to pen a late-night thread.

And it's a roller coaster, to say the least.

Chrissy herself even describes it as "quite the story."

If you cast your mind back to May...

You'll remember that Chrissy went under the knife to have her breast implants removed.

Before the surgery, Chrissy took a routine pregnancy test.

"I did the routine pregnancy test you do before surgery," she began.

But, it came back as negative.

I did the routine pregnancy test you do before surgery. It said negative. It was not negative.
— chrissy teigen (@chrissy teigen)1597465982.0

Chrissy has been very open about her struggles to get pregnant and experience with IVF, so this came as no surprise to the star.

She went on to reveal that she takes pregnancy tests monthly.

And that she always prays to see a positive result.

However, this time, she wasn't.

...I was not disappointed. But I was scared shitless. Was pretty positive you shouldn't get your boobs out while pregnant? Pretty sure.
— chrissy teigen (@chrissy teigen)1597466203.0

Her test came back positive! But, the star admitted that she was terrified because she had had the surgery to remove her breast implants.

"We went to every appointment terrified."

So we prayed to the boob surgery gods that everything would be okay. Went to every appointment terrified. Even with… https://t.co/ui4sUh9e5c
— chrissy teigen (@chrissy teigen)1597466267.0

Chrissy even admitted that she didn't think she could get pregnant naturally.

"Life has a way of surprising you."

But what they say so often can be true. When you give up on trying, life has a way of surprising you. In summary, my boobs hurt.
— chrissy teigen (@chrissy teigen)1597466430.0

"In summary, my boobs hurt."

Chrissy ended her thread with a message for fans.

Also, you guys have seen how rough these past few months were for me here. So now you know why I just extra appreci… https://t.co/UiSZHp5yox
— chrissy teigen (@chrissy teigen)1597466550.0

The star thanked everyone who has supported her over the last few months.

You can watch the whole music video that got everyone talking here.