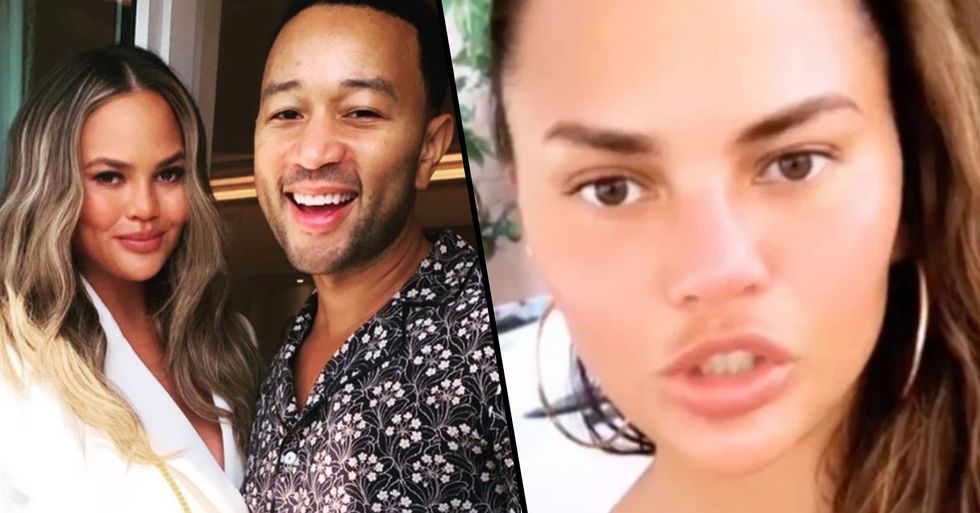 We're all well aware that Chrissy Teigen is the queen of trolling her husband, John Legend, and it seems her latest antic is no exception.

The star got so mad over the lyrics in one of the songs from his upcoming album that she decided to take matters into her own hands...

Whether it's online or even in interviews, Chrissy never wastes an opportunity to roast her husband.

And her latest antic may be her most brutal yet...

The YouTube video, which runs for a whopping twenty-five minutes, sees the couple answer a number of home truths about their relationship while hooked up to a polygraph machine. From prenups to crushes, they well and truly dished the dirt - making for a rather entertaining spectacle.

And don't even get us started on when she shared this "heartfelt" post dedicated to her husband.

Or what about when she trolled Legend for his "sexiest man alive" win last year?

She seemed particularly thrilled about the announcement.

However, Teigen's most recent antic may be her most brutal yet...

Last weekend, Legend played her his new album, and let's just say that the lyrics in one particular track didn't go down too well.

So, of course, in usual Teigen-style...

Listening to john’s new album for the first time. “You know there’s a lot of women tryin to take your place” bitch what the fuck?
— chrissy teigen (@chrissy teigen)1590362650.0

She hopped on to share one of the lines she really took issue with.

And when John tried to defend himself by finishing off the rest of the lyric?

But she didn't stop there...

Chrissy went on to tweet that in light of the problematic lyric, she'd was now keeping her options open with the male stars of Better Call Saul.

And she then brought Jhené Aiko - who duets with John on the album - into the drama...

Luckily, Aiko saw the funny side to Teigen's quip...

She tweeted saying how much she loves Teigen.

But it seems the star wasn't happy with just trolling her husband on Twitter.

So, she turned to Instagram to ramp things up a notch.

"Currently leaking John's album on my stories," she wrote.

Legend himself then chimed in.

He attempted to use a touch of good old reverse psychology on his wife.

But, of course, Teigen clapped back.

We hope these 2 never change!

After she uploaded a bikini picture, trolls disgustingly picked her apart - with the bullying forcing her to quit the popular app. Keep scrolling for the full story...