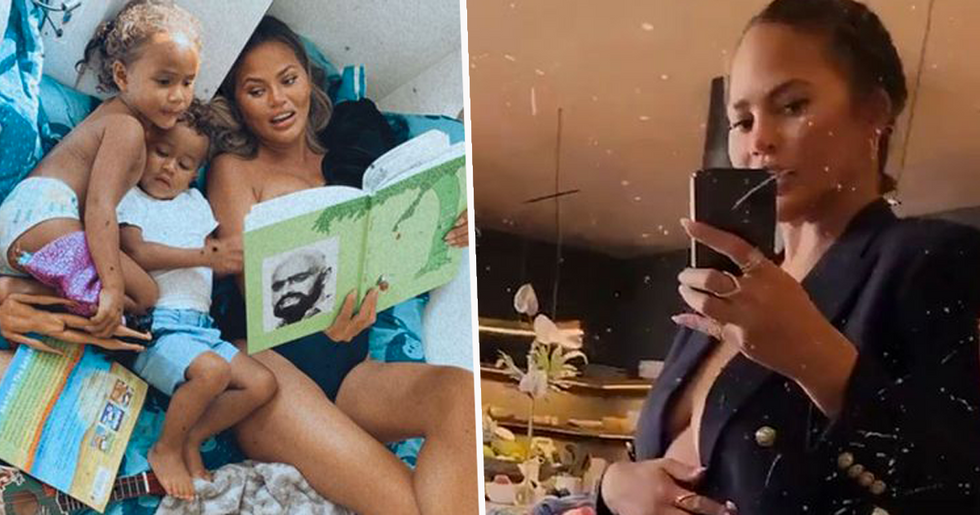 After the exciting news came out about the couple's third child, we've all been left wondering how Chrissy Teigen managed to make sure nothing could give their big surprise away...

As we all know, once a fan spots something, It's game over for any surprise.

But since the exciting news came out, everyone has been left wondering one thing...

How did she manage to keep her baby bump a secret for so long?

And today, it looks like things are going to get even more tiring...

The video for John's new track, "Wild" dropped just an hour ago...

The bump has left everyone baffled at how we never even guessed.

She managed to fool us all and still post to her Instagram... In a bikini no less.

Everyone has been left super surprised by the news.

But after looking back on her photos, there's a pretty obvious way she managed to keep her pregnancy a secret.

And it's all about angles.

Before the coronavirus lockdown, the Legends made their way to Mexico to wait it out.

And it seems like Chrissy managed to hid her bump all holiday just by the way she was posing.

What could have been one of the biggest giveaways turned into a regular bikini pic, as her bump was hidden the whole time.

Despite this swimsuit showing off her figure, it didn't give anything away...

Days later, Miles was on hand to cover any unexpected belly bumps.

By laying across Chrissy's stomach as they sat on the sofa for the family pic.

And while everything seemed normal in the Legend household, no one knew about the fifth member getting in on the action.

As time went on, she continued to keep up with the tricks to conceal any possible giveaway.

Earlier this month, Chrissy posed for storytime with her two children.

And managed to conceal the bump under a huge hardback copy of the children's book.

But on August 4, Chrissy had to try a little harder and resorted to wearing a beautiful flowing dress to hide the big surprise.

But after John's music video Wild came out, everything was thrown up in the air.

Chrissy later confirmed the pregnancy news after fans started to question everything. She wrote: "Look at this third baby s***."

It seems that Lockdown has brought this power couple closer than ever before.

John even came out and said the couple has learned lots about each other over throughout lockdown, despite being together for 7 years.

He also said their approach to parenting during this time changed so much because it's a more "intense experience."

He said: "We have also learned a lot about parenting. It's a more intense parenting experience than we've ever had. It's made us stronger and brought us together."

They've made the best out of the worst situation due to COVID.

"It's definitely a challenge to co-parent during these times."

And it'll be an even greater challenge now a third little Legend is on the way. Check out the video for Wild below...

Congratulations, Chrissy and John! Keep scrolling for more on the power couple...