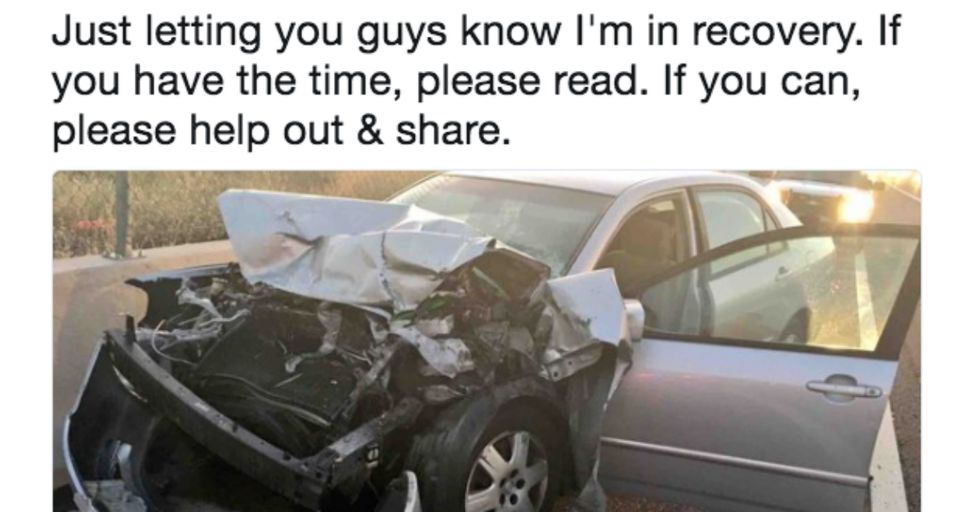 He goes by Sassy Gay Republican, and the universe just slapped a heaping helping of karma on his plate.

@SassyGayRepub is exhaustingly active on Twitter, where he has almost 30,000 followers, who, we assume, don't mind listening to him rail on liberals, complain about Democrats, and praise Trump without ever coming up for air.

Now, after tweeting repeatedly about the horrors of universal health care, he has found himself in a genuine predicament and is learning just how broken our current system really is.

@SassyGayRepub has caught the attention of celebrities before.

Chrissy Teigen did not mince words when he suggested liberals who trash talk Trump are also trash talking the people who voted for him.

He's also been very vocal about his opposition to Obamacare and universal health care on a pretty consistent basis.

Most of his sentiments are troublesome, at the very least, and he's always met with a fair amount of pushback (not to mention corrections) when he gets something wrong.

The whole story was presented as a Shakespearean-level drama in four acts.

It's gorgeous. It's karma at its finest. First, he is alive and OK — which is the most important thing. Second, he got served, and the justice is glorious.

This is a pretty common take for conservatives — they don't want to pay taxes that will provide services they themselves won't benefit from.

Those opposed to universal health care often believe that those systems result in long lines and people not receiving the treatment they need, but that is largely a myth.

Act III: But then the guy who "likely won't need" health insurance got in a car accident.

Because sometimes unforeseen things happen to people. And wouldn't it be wonderful if when these things happen, you were instantly covered by insurance?

@SassyGayRepub was suddenly smacked in the face with the truth of the American insurance system.

In one instant, he was feeling all the financial anxiety that comes with facing an emergency situation. It's not fun, and it's not pretty, and it could be so much easier if it weren't for Republicans' opposition to the single-payer system.

Act IV: It's incredible how everything changed once he finally found himself actually trying to use the system.

Yes, @SassyGayRepub! Finally, you must understand that insurance companies totally take advantage of people! That our system is completely broken!

You almost feel bad for the guy. Almost.

It's hard to have sympathy for people who can't see outside themselves or their own experiences enough to support policies that would make life unequivocally better for the vast majority of people in this country. There was definitely one person who had no sympathy whatsoever for @SassyGayRepub...

And that person was Chrissy Teigen.

She was so amused by the story that she told Hamilton to "move over." Hamilton! But this isn't over folks. There's a twist ending. @SassyGayRepub posted a GoFundMe to raise the money he wouldn't get from his insurance companies for medical bills and a replacement car.

But apparently, the photo he used on the page wasn't even his car.

It seems he might not have learned his lesson, after all. It seems like @SassyGayRepub either faked the car accident completely and is taking money from strangers under false pretenses, or that he was in a car accident but is misleading people with fake photos? Either way, not cool man. As evidenced by the first three quarters of this story, when you say or do dumb things, karma will get you.

The investigation is still ongoing.

One of the Twitter users in the above screenshot has come forward to say that the photo used on @SassyGayRepub's GoFundMe page is not hers, but that it's definitely from 2015. Hmm. This bizarre story is only getting weirder. One can only hope that a little self-reflection is on the horizon for @SassyGayRepub.