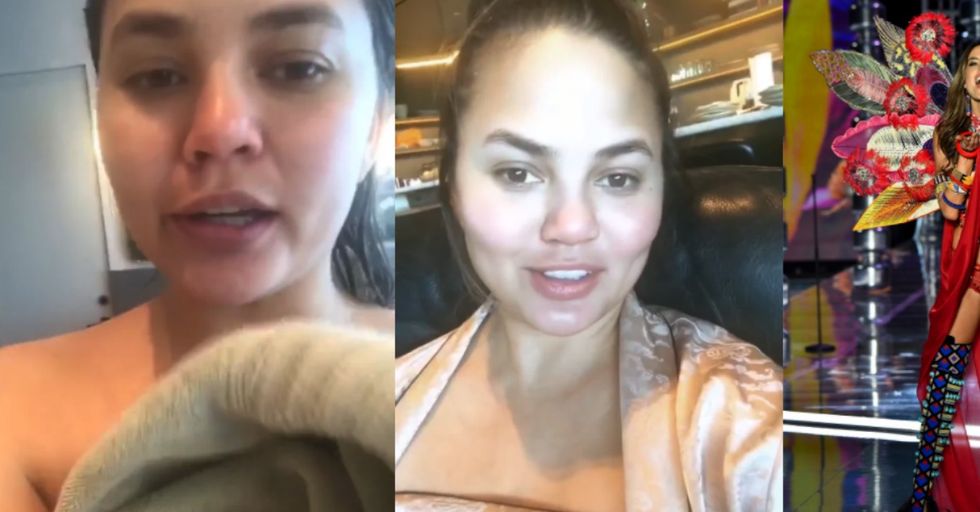 Every year, Victoria's Secret Angels strut down the runway in elaborate outfits centered around the brand's signature lingerie sets in the Victoria's Secret Fashion Show. This year, it took place in Shanghai, China but one of the Internet's favorite models didn't get to attend.

Chrissy Teigen, Internet Sweetheart, model, celebrity chef, and wife to John Legend, posted one of the Victoria Secret's Instagram photos from the Shanghai fashion show to her Twitter account over the weekend.

She captioned the photo, "Can someone please photoshop me into this?" Our hearts are breaking a little bit, imagining Chrissy Teigen as a girl who missed the bus to camp with the rest of her model friends. Thankfully, Twitter came to Chrissy's aid and helped her dreams of being in the Shanghai Victoria's Secret Fashion Show (kind of) come true.

Twitter came through with photo options for Chrissy, some of them more realistic than others.

Twitter user @mileyisworth replied to Chrissy's original photo with her own version of the bus of Victoria Secret models. It's just a bus full of 15 Chrissy Teigens. We wouldn't complain about that fashion show.

Julian replied with a couple of photo options.

Julian's photoshop skills are not quite as advanced as Twitter user @mileyisworth's, but the photos are equally entertaining. Chrissy replied, "second is perfect very realistic". Twitter user @bigmakball added, "there goes a magazine giving us girls more unrealistic goals & expectations." Chrissy loved the photo submissions and kept going with her joke.

She spent the rest of the day pretending that she was getting ready for the fashion show, to her fans' delight.

"Crazy nervous to close the Victoria's Secret fashion show tonight!!! Better get one last gym sesh in LOL!!!!" she wrote. She even posted some videos of her lounging around in a robe to her Instagram story as if she was getting ready for the show, leaving some fans confused as to whether or not she really was attending.

Chrissy and her fans kept up the joke that she was in Shanghai with the Victoria's Secret Angels.

She tweeted, "Check my instagram story !!! I am live from shanghai baby WOOOOOOOOOO." Chrissy and her fans were not nearly finished trolling the show.

She posted this video to her twitter account, still trolling the fashion show and pretending that she was about to be a Victoria's Secret angel.

One person perhaps confused but well-meaning person replied and said, "My favorite Victoria’s Secret is Chrissy Teigen, she’s the best... really she is. She’s also been a VS Angel since she was born, she came out and they were like 'yes that’s one sexy baby mhmm she’s an angel! HIRED!' and her mom was like 'wtf get out' and now here she is." To be honest we have no idea what this means, but it sounds like it's a nice thing to say.

Astrid Himawati posted the photo of paella and commented, "@chrissyteigen must be cooking in Shanghai now." Chrissy responded and said, "Making paella for my fellow VS girls !!!!"

Fans were delighted by Teigen's thorough trolling of the show.

Marisa Witter commented on one of Chrissy's Instagram stories where she pretended to be preparing for the show. She wrote, "@chrissyteigen’s troll level of the VS fashion show this morning is giving me life #mostlyabwork #VSFS2017" Chrissy replied and said, "no one is answering my phone calls or emails but I am here in shanghai and ready for my fitting !!!!!!"

If only someone hadn't canceled Chrissy's wake-up call, we could have seen her strut her stuff in the show last night.

It turns out the Victoria's Secret fashion show was yesterday and someone (clearly jealous of me) cancelled my wake… https://t.co/xO299c8Zvo
— chrissy teigen (@chrissy teigen)1511197754.0

She snarkily tweeted, "It turns out the Victoria's Secret fashion show was yesterday and someone (clearly jealous of me) cancelled my wake up call they will be hearing from my lawyers" Ugh, shame on the person who cancelled that very important call.

They'd have to be crazy not to invite her to be a Victoria's Secret Angel next year. And if she doesn't make it into the line-up, we're sure her fans would very much appreciate it if she could do this all over again.