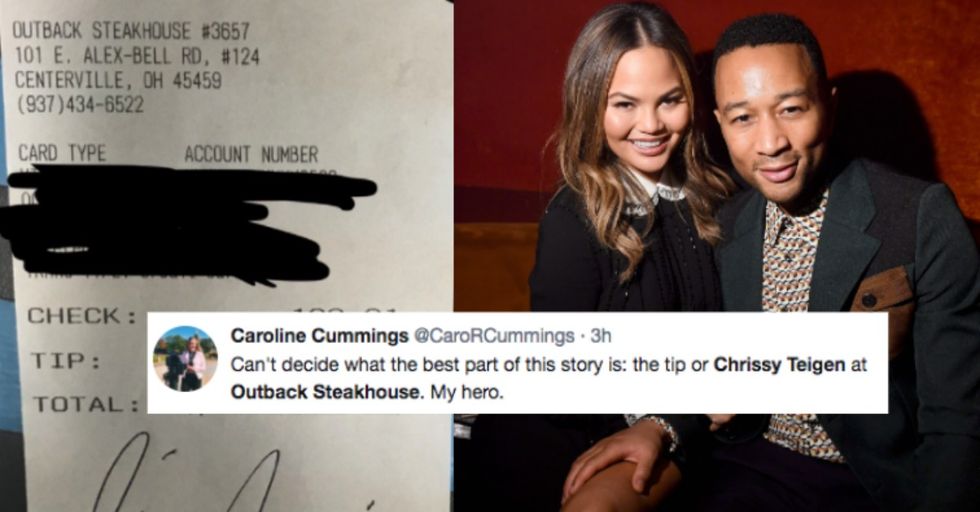 Chrissy, her husband John Legend and her their baby daughter Luna took a trip to Outback Steakhouse recently for one of their coveted bloomin' onions, but the night ended up delivering something far better — an opportunity for kindness.

That night, their waitress was a 21-year-old named Mikayla Scott. And little did she know, her life was about to change.

She told WHIOTV7 that she was nervous to serve Chrissy at first.  The supermodel came in just before closing on Friday, October 27 with her daughter, Luna, and four friends. "She walked in with all her glam," Scott said, "I was so nervous I was going to do something wrong."

Chrissy and her family only spent $191.81 at the restaurant.

But at the end of the meal, Chrissy tipped Scott a whopping 516 percent of her bill. The waitress said that she wasn't expecting anything out of the ordinary, but was floored when she got a $1,000 tip for the $200-ish bill.

Scott shared some of the money with her coworkers and used the rest to repair her family car.

Chrissy and her friends ordered a slew of appetizers, one of which was the famous bloomin' onion. Scott said that Chrissy told her, "You have to take this away from me... I'm going to eat it all."

Teigen loves that bloomin' onion so much that she got a private tutorial on how to make one.

Back in April, an Outback chef made Chrissy and John's dreams come true by giving them their very own private lesson. Apparently, all you have to do to get your personal lesson is to tweet, "PLEASE SEND AN OUTBACK CHEF TO MY HOME."

Other than that, you just need to be a supermodel, game show host, and all-around Hollywood sweetheart.

Easy peasy, right? But seriously, it seems like John and Chrissy are down-to-earth, sweet and generous people. I mean, the reason they were in Ohio in the first place was John's high school football team's homecoming game. How cute is that?