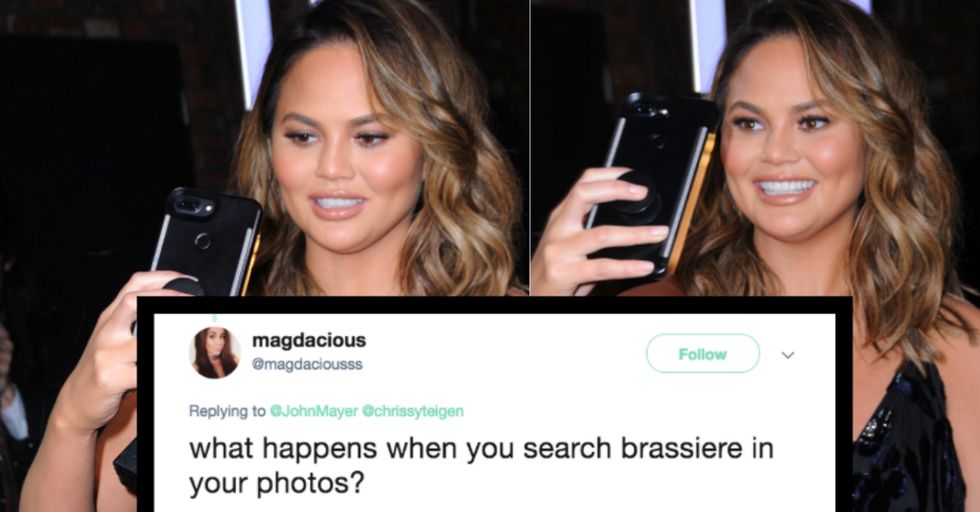 Where would you be without your smartphone? It gives you directions, takes stunning photos, and gives you access to the world wide web all in the palm of your hand. Oh, and it helps you make calls every now and then.

But what if your phone was doing something with your private photos that you didn't realize? After hearing a rumor, Chrissy Teigen decided to investigate. And it turned out to be 100% true.

Many people have photos on their phone that they probably wouldn't want the world to see.

Whether it's just goofy pics or full-on nudity, our phones should be a sacred place where we're in complete control of our photos and personal information. So that's why this new iPhone hack has people totally weirded out.

"ATTENTION ALL GIRLS ALL GIRLS!!!" it says before describing a bizarre discovery she made on her iPhone. Apparently, every one of her cleavage-baring pics had been collected and saved into a neat little folder on her phone titled "brassiere."

@ellieeewbu @bbygirlerica what you WERE NOT LYING. WHAT IS THIS how does @Apple know I’m getting freaky like this o… https://t.co/eUNDEFKcuL
— nadin (@nadin)1509389214.0

Several users tried the trick themselves, and HUNDREDS of photos popped up. "WHAT IS THIS?" one user demanded. "How does @Apple know I'm getting freaky like this?"

While some responses were lighthearted, many were pretty upset about the discovery.

@ellieeewbu @SwiftOnSecurity how do we keep this from happening? I feel really really violated.
— Nora (@Nora)1509387078.0

Not only does it feel like a violation, but it also seems unnecessary. Why does Apple feel its users would benefit from keeping their scantily clad selfies in one easily accessible folder?

After much debate, social media queen Chrissy Teigen decided to join the conversation.

She tried out the hack herself, and it did not disappoint. "Why?" she asked...

She also posted an update after further investigating.

Teigen claims that typing in "food" actually does bring up food, but not the same can be said for "penis" or "boobs." And let's just ignore the fact that this probably means Chrissy has some penis pics on her phone.

Upon further research, one user did discover something extremely important, though.

It doesn't just work for "brassiere". It works for DOGS, TOO. EVERY DOG PHOTO ON YOUR PHONE IS STORED IN ONE FOLDER.

Swimsuit, ocean, sunbathing, outdoor, and, as Chrissy said, food, are all categories of photos that Apple stores in separate folders on your phone. But WHY?

While we may never know the answer, there is one thing for sure:

This Twitter user wins the internet with the only result that came up for "brassiere." Seriously, what is that?