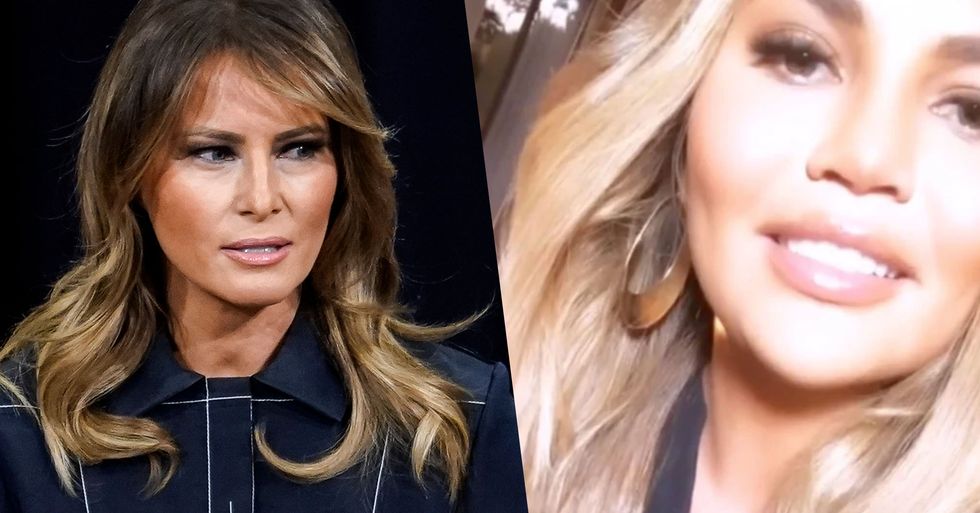 Chrissy Teigen is undeniably the sweetheart of the internet. Her Twitter presence makes her beloved by fans all around the world. And even better? Her social media proficiency means fans can always feel connected to the star.

She didn't hold back... in fact, this may be her most brutal Twitter rant yet.

Keep scrolling to see what she said...

She's not one for sugar-coating.

every room is very used and occupied. I have worn a lot of expensive things but always have to give them back. sinc… https://t.co/vF7DNzB0Jj
— chrissy teigen (@chrissy teigen)1575865380.0

She's also been open about parenting.

Taking kids to the dentist is a rite of passage for a mom, after all.

But her latest social media move is her most brutal yet.

We all know that Chrissy isn't afraid to call people out.

And the First Lady certainly isn't an exception to this.

Chrissy is an outspoken Trump critic, so when she saw this...

While the world is consumed by the COVID-19 crisis, Melania has been focusing on building a tennis pavilion.

I am excited to share the progress of the Tennis Pavillion at @WhiteHouse. Thank you to the talented team for their… https://t.co/w1LCR8IqbN
— Melania Trump (@Melania Trump)1583428827.0

The First Lady has remained fairly silent about the medical pandemic apart from a few words on how to prevent getting sick and how to pass time while self-isolating.

So, she was forced to respond to claims that she wasn't doing enough.

I encourage everyone who chooses to be negative & question my work at the @WhiteHouse to take time and contribute s… https://t.co/xKBaSx8Cg0
— Melania Trump (@Melania Trump)1583592036.0

"I encourage everyone who chooses to be negative & question my work at the @WhiteHouse to take time and contribute something good & productive in their own communities. #BeBest" she wrote.

And Chrissy was less than impressed...

Has melania even thought about doing something with her be best shit during these times? I see regular ass awesome… https://t.co/l4VRkjYyup
— chrissy teigen (@chrissy teigen)1584490160.0

She well and truly ripped into Melania in the brutal Twitter thread.

I expect Donald to be a do nothing fucking loser wimp but she could maybe possibly try to uhhh BE BETTER possibly t… https://t.co/cf689NPEUs
— chrissy teigen (@chrissy teigen)1584490399.0

At one point she calls her a "wife bot." And it didn't end there...