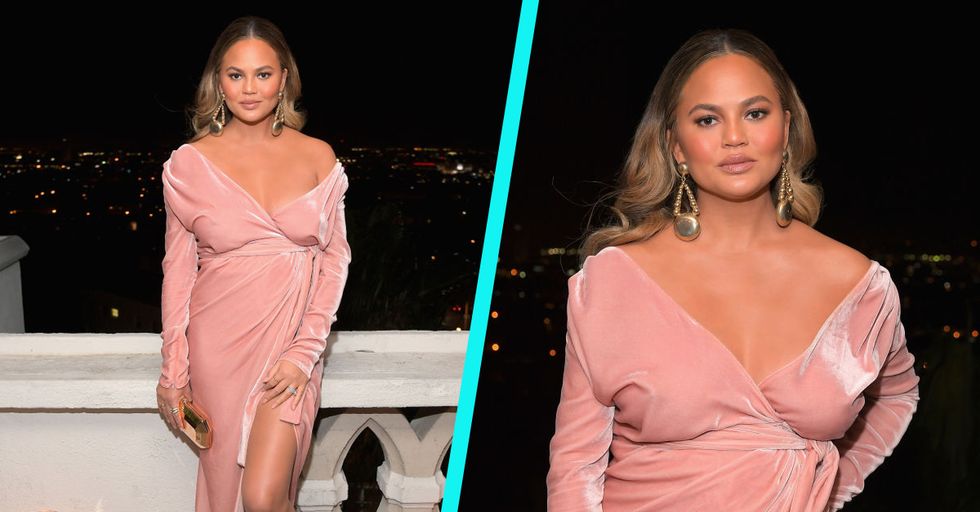 Chrissy Teigen is a social media queen. Whether she's trolling people on her Twitter or uploading adorable pics of her daughter Luna to Instagram, we remain obsessed.

She's certainly never one to shy away from sharing her life with the world and her eagerly awaiting fans. It's probably why she has such high follower counts on her social media platforms; she feels relatable, even though she's a supermodel and married to John Legend.

Teigen's most recent live-tweet was certainly one for the books.

Teigen and Legend were on their way to vacation, but they didn't get very far.

Everyone loves to travel during the holidays, right? Wrong. Teigen's flight had quite the mishap.

Four hours into their 11-hour flight to Tokyo, their plane actually turned around!

a flying first for me: 4 hours into an 11 hour flight and we are turning around because we have a passenger who isn… https://t.co/YaRx3ElsZW
— chrissy teigen (@chrissy teigen)1514337823.0

Yes, that's correct. They flew back to LAX. Why, you ask? A rogue passenger was on their flight who didn't belong.

They spent eight hours total on the plane and where did they go?

Lmao after all this I will have spent 8 hours on a flight to nowhere. Like we were all just havin a great time up h… https://t.co/zeEVaUzBh1
— chrissy teigen (@chrissy teigen)1514340842.0

Nowhere. They took off from LAX and went straight back to LAX. The plane took off at 11:36am PST and landed back in Los Angeles at 7:33pm PST. That's quite the journey!

Despite the fact that everyone was on an All Nippon Airways flight, the rogue passenger had a United Airlines boarding pass.

They keep saying the person had a United ticket. We are on ANA. So basically the boarding pass scanner is just a be… https://t.co/XrQqwajk5l
— chrissy teigen (@chrissy teigen)1514344844.0

They had boarded the completely wrong flight despite having their ticket scanned. Which is just...not very reassuring.

The flight had to turn back due to the security protocol.

.@chrissyteigen is on an international flight that turned around 4 hours in because a passenger isn’t supposed to b… https://t.co/7uasJSQ64r
— Jensen Karp (@Jensen Karp)1514340072.0

A spokesperson for ANA told Huffington Post, "During the flight, the cabin crew became aware that one of the passengers boarded the incorrect flight and notified the pilot." Whoops? But how does this happen...?

Teigen seemed to have a generally good attitude about the entire ordeal.

I don’t know why I’m not more upset about this. The pleasure I get out of the story is worth more to me than a direct flight to Tokyo
— chrissy teigen (@chrissy teigen)1514341995.0

And of course, she kept her Twitter followers updated as the situation unfolded. The airline is apparently "researching the situation currently to determine how the passenger boarded the flight." We're all dying to know!

ANA's statement concluded with, "ANA would like to express its apologies to the passengers for the inconvenience. We take great pride providing exemplary customer service, and on this flight we failed to do so." Air travel is already collectively the worst, but this really takes the cake as a seriously annoying issue.

We low-key wish she had actually been interviewed. Maybe she could have live-tweeted that as well? Also, twenty minutes seems like a very long time.

Police were interviewing all the people seated around the mystery person once we got off the plane. Why would they do this! I MUST KNOW MORE
— chrissy teigen (@chrissy teigen)1514348292.0

The mystery was simply eating away at her! Now we all need to know!

In the end, Teigen and Legend were moved to a lounge where everyone was given ramen, and then they boarded a new flight.

*quits whatever my job is to devote my life to this likely very simple mistake*
— chrissy teigen (@chrissy teigen)1514348791.0

Finally, they took off! But though they're in the sky, the mystery remains on the ground. Who was the mystery person and why did they board the wrong flight? Seems we may never know...