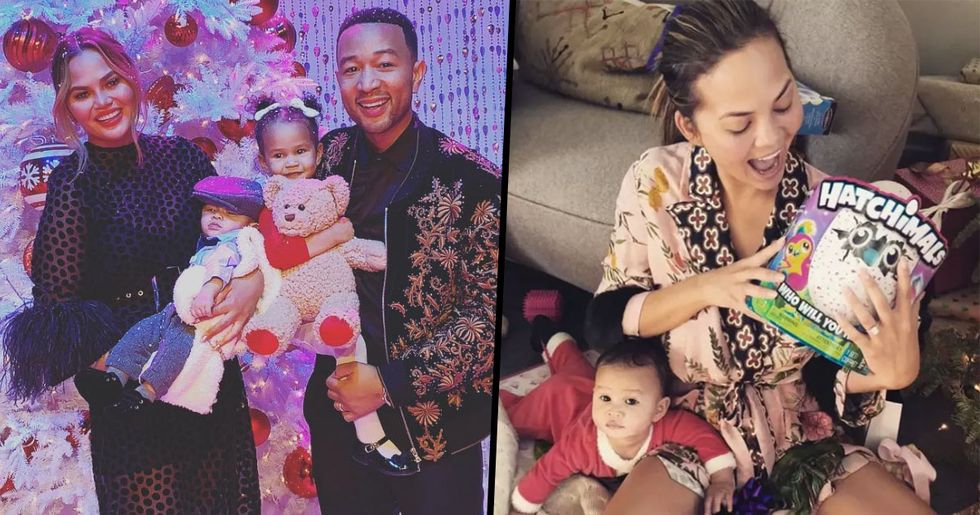 As a parent, especially if you're new to the game, there's a temptation to look online and compare yourself to all of those other parents who seem to "have it together." One scroll on Facebook or Instagram can reveal a whole host of new moms and dads posting pristine, professional snaps of their little bundle of joys, appearing to have the tricky art of balancing work and childcare down to a T and generally have the whole parenting thing worked out.

The author and model, who has two kids with her husband, singer, John Legend, has found herself being branded as the most relatable celebrity mom.

From falling asleep with her breast pump on to getting candid about post-pregnancy bods, Teigen is pretty much the mom friend that we all need.

Keep reading to see some of the star's most relatable parenting moments...

After getting together over a decade ago and officially tying the knot in 2013, the couple have since gone from strength to strength.

The pair have proved time and time again that they're perfect for each other.

Not only does John allow his wife to relentlessly tease him online, but they are just so damn cute together.

On a more serious note, the couple have overcome a lot when it comes to starting a family.

Legend and Teigen fell victim to fertility problems, needing the help of IVF to enable them to finally start a family. And, while some couples would buckle under the pressure, the pair persevered through the process together.

Having a track-record for being open and honest with fans, Teigen freely spoke about her IVF experience.

After posting an image of her son, who, at the time, was a month old, the star was asked if she'd used IVF to conceive him, as she had for her daughter, Luna, who was 2 at the time of the post. Teigen seemed to have no qualms opening up about IVF, saying, "Yep, he was just on ice a smidge longer, science and the human body are beautiful," and when asked if she was offended by curious fans, she responded by saying that she had no problems discussing how she conceived her children, writing: “I wasn’t offended by it - people are just curious and I think hearing success stories gives people hope. I’m all for talking about IVF."

Speaking of being honest and open, Teigen has found herself being crowned the unofficial queen of Twitter.

From clapping back at President Trump to getting candid about stretch marks, the internet just can't get enough of the star. And to be fair, she's pretty hilarious too.

Teigen is definitely that girl who, even though you don't know her, you know you'd be best friends.

And there was that time that she fully trolled her husband.

It seems like even her partner in crime isn't safe from the star's tweets.

But she's even gained recognition away from the internet, winning Glamour's Women of the Year award in 2018.

The big win also saw her featured in Glamour's "Women of the Year" issue and allowed us to witness a very heartwarming speech from both Teigen herself and, of course, her husband, John Legend, who presented her with the award. Let's be honest, she deserves it.

Basically, everyone loves her.

Unproblematic, relatable, and funny... we certainly see why.

And now it seems like Teigen has got yet another string to her bow.

The internet reckons that she's now the most relatable celebrity mom, and there are quite a few tweets to prove it. Here's why everyone finds the star's parenting so relatable...

She's not afraid to be brutally honest.

After a fan asked her why she wasn't at John Legend's concert, she had this blunt response. Gotta love the honesty.

She won't hesitate to clap back at trolls.

People seem to like to tell her that her opinions and political views are "disgusting" because she's a mom, but she always serves the best comebacks.

She buys toys "for the kids" even though we all know that they're secretly for her.

I'm sure that we can all relate to this one. The star frequently shares snaps of the toys that she buys for her 2 kids, although she definitely looks more interested in them than they do. Story of our lives.

When someone rudely came for her about her IVF, she proved that she's not to be messed with.

This user claimed that Teigen used IVF as "an easy way out," although, we don't really see how anything about the process is "easy." Anyway, Teigen was quick to set the record straight.

This jibe had us chuckling.

Rather than listing off every detail about her daughter, Teigen chose to tweet this instead, a quick jibe to all the trolls who call her a bad mom.

She also gave us a more unconventional post-baby update.

Following the birth of her daughter, Luna, we were pleased to find out that John was doing well. After all, we all know how hard labor is on men, duh.

She accidentally tweeted a number of creepy-sounding things about her pregnancy.

Throughout her pregnancies, she would regularly tweet about how she enjoyed feeling her baby. But, after the realization of what she'd written hit, she was quick to reassure us that she wasn't actually creepy. Phew.

She spoke light-heartedly about this postpartum reality that we all know too well.

Many moms have to wear tear and bleed proof underwear after giving birth, obviously, because, initially, the whole experience can take its toll down there, right? Well, Teigen had no problems sharing this reality with her followers.

She regularly puts her husband in his place when he's slacking.

We hope the sleep was nice, John.

The star regularly reminds us that no one is the perfect mom.

Trolls will often hide behind anonymous or private accounts, but Teigen has none of it, urging them to make themselves visible if they're so "perfect."

She put her daughter well and truly in the spotlight in this snap.

We all say that our kids are the most beautiful kids in the world, but Teigen went to new heights by going as far as to crop herself out, because she knew how cute her daughter looked.

Back onto the topic of IVF, the star loves to troll us about it.

After being slammed for picking the sex of her child during her IVF treatment, she took it a step further and joked that she picked the embryo's personality traits too.

The star had a realization that we're all familiar with...

Moms all know that feeling of anxiety after leaving their kids and, as a celebrity with a busy schedule, it's a feeling that Teigen knows all too well. And if someone else's kids make you feel a little better, why not?

She also gets real about her post-baby bod.

From sharing her belly to her stretch marks, the star has no qualms showcasing her unfiltered body, and we're so here for it.

Finally, she gave us this relatable gem of a picture.

The star posted the image to her Instagram with the caption "MY MILK," seriously, someone get this woman a stand-up comedy gig.
20%

$11.91 $9.53
Buy Now
See More Deals
We hope you find these deals as awesome as we do! Just an FYI: we may receive a share of sales from links on this page