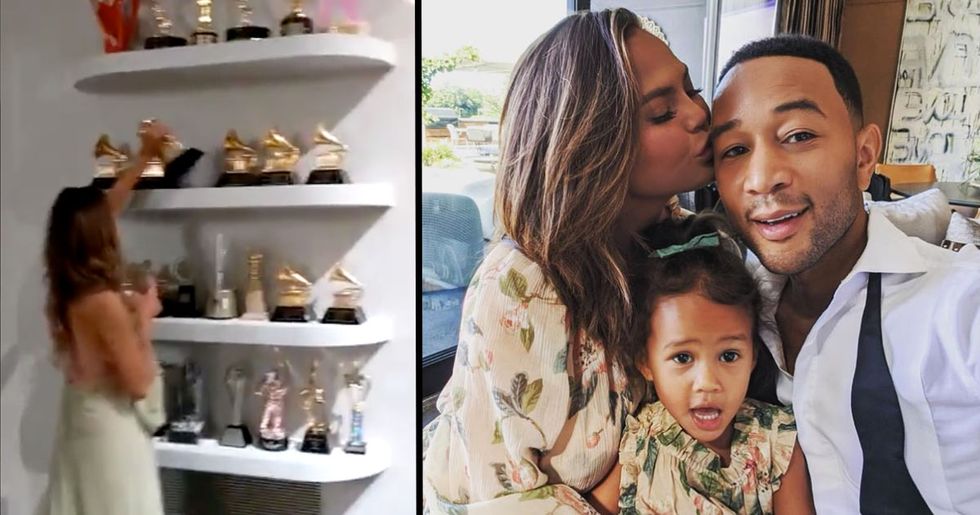 I mean, they're known for giving us some of the most iconic moments we've ever seen, from cute interactions with their children all the way to putting their relationship on the line with a lie-detector test. Now Chrissy has decided to add another iconic moment to their already extensive list.

Keep scrolling to watch her in action.

And don't even get me started on when she shared this "heartfelt" post dedicated to her husband.

But Chrissy has added yet another notch in her belt with this iconic moment.

On Saturday night at the Baby2Baby Gala, she was awarded the Giving Tree Award because of her work with children living in poverty.

The thirty-four-second clip showed Chrissy walking over to the couples' shelf of fame and removing not one, but two of Legend's Grammy's to make room for her new award.

I have to say, it did look pretty good on that shelf...

Although, I think the couple is going to need much more space for their awards... Maybe it's time to invest in a cabinet.

I mean, we get it, John Legend has a million awards. It's Chrissy's time to shine now.

And this user shared her excitement with Chrissy!

"Yay" for her! What a well-deserved award! If you're in the mood to read more about Chrissy's iconic moments, but the mom version, then keep scrolling!