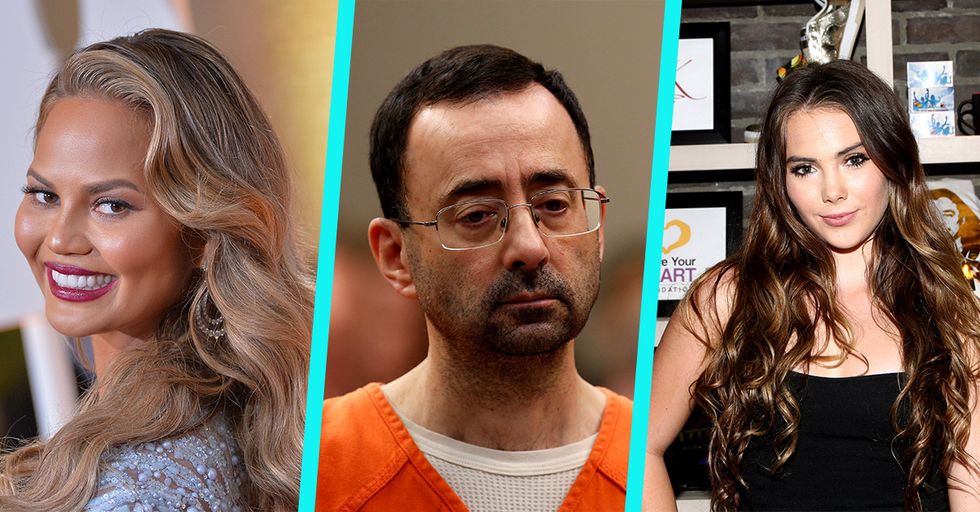 Chrissy Teigen is no stranger to headlines. Whether she's live tweeting a flight from hell, or trolling everyone on the internet, she's constantly defining what it means to be "social media goals." The supermodel and entrepreneur is once again in the headlines, and it's for quite the incredible reason.

Teigen tweeted on Tuesday morning that she would gladly pay Olympic gymnast McKayla Maroney's steep fine if she chooses to speak at the hearing against her sexual abuser, doctor Larry Nassar.

Teigen tweeted Tuesday morning that she would be happy to pay Maroney's fine.

The entire principle of this should be fought - an NDA to stay quiet about this serial monster with over 140 accuse… https://t.co/xRX90fndA5
— chrissy teigen (@chrissy teigen)1516119355.0

"The entire principle of this should be fought - an NDA to stay quiet about this serial monster with over 140 accusers, but I would be absolutely honored to pay this fine for you, McKayla," she tweeted. Maroney recently revealed that she was paid to keep quiet about her sexual assault by USA Gymnastics doctor, Larry Nassar.

Maroney was forced to sign an NDA as part of her legal settlement.

So basically if she speaks up at Nassar's hearing, she'll be fined a hefty amount of money. Money that Chrissy Teigen is clearly angry enough to pay.

As to be expected, Maroney is not happy either.

The Daily Mail reports that Maroney is suing USA Gymnastics, the US Olympic Committee, and Michigan State University, claiming that the NDA she was forced to sign was illegal. Maroney is one of 140 accusers against Nassar.

Maroney was a member of the "Fierce Five" at the 2012 London Olympics.

She revealed in a lawsuit that she was given $1.25 million by USA Gymnastics in 2016. Maroney accepted the conditions, which included an NDA she had to sign. If broken, she would have to pay a penalty of $100,000.

Maroney claims that she signed the NDA because she needed the money to pay for treatment as a result of her sexual abuse.

The Daily Mail reports that at one point, Maroney even thought about ending her life. Maroney's team is arguing that it was illegal for USA Gymnastics to make her sign a document to keep her quiet about being molested. Keep reading for more details regarding the case...

Nassar's hearing begins Tuesday and is expected to go until Friday.

Fellow Fierce Five member Simone Biles recently posted on her social media accounts that she is also one of Nassar's victims.  During the hearing, roughly 88 women will make statements regarding Nassar's abuse.

Some will do so in person and others will have letters read or audio played.

Maroney first broke her NDA and agreement when she shared a Twitter post in October, speaking out about Nassar's abuse. Maroney revealed that she had been molested by Nassar from the ages of 13 to 20.

In her social media post, she explained that Nassar would call the abuse "medically necessary treatment."

There was a ton of support for Maroney speaking out, including her fellow Olympic gymnasts as well as celebs like Teigen. Back in December, Nassar was sentenced to 60 years for possessing child pornography.  The hearing taking place this week will be due to Nassar pleading guilty to seven accounts of sexual assault.

A lot of people are calling for laws to be changed regarding NDAs.

They're arguing that a person shouldn't be penalized for breaking an NDA if the NDA is regarding criminal behavior. It's unclear as to whether Maroney will speak at Nassar's hearing and be forced to pay the $100,000.

Teigen is letting it be known that she has Maroney's back.

This is the principle of women standing with women. Also, once again, @chrissyteigen is the best person on the inte… https://t.co/wYVOu1wOkm
— Leah (@Leah)1516144005.0

Teigen received a ton of support from fellow Twitter users for her offer and her stance on the issue. In the wake of the #MeToo and #TimesUp movement, it's amazing to see women lift each other up, stick up for one another, and put words into action.