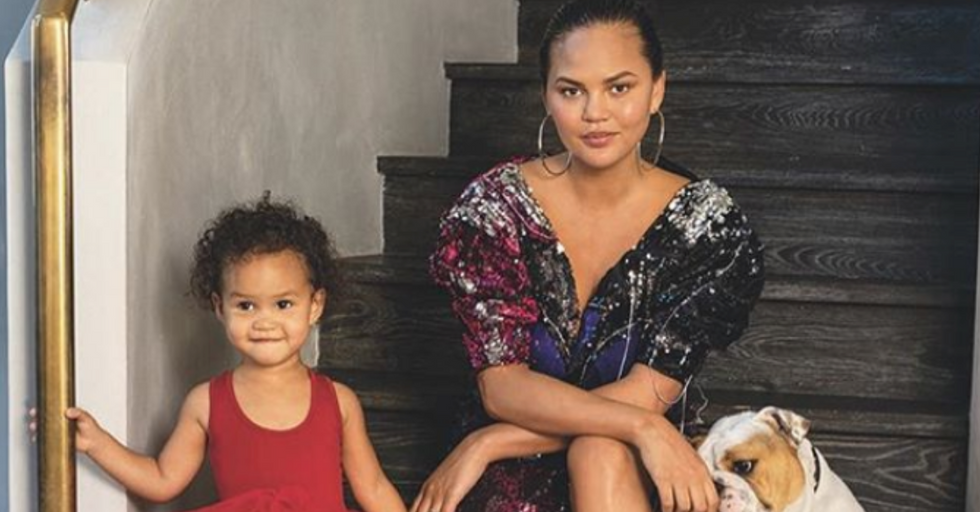 Chrissy Teigen may be a massively successful entrepreneur, model, TV star, and Twitter phenomenon, but to two-year-old Luna, she's just mom who sometimes makes really gross food that she will never ever even try. That's right. Even ultra-famous moms have to deal with picky eaters and the terrible twos. Chrissy shared her struggle to find food that Luna will eat on Twitter and Instagram.

She has gone so far as to make and laminate a menu with her daughter's favorite foods on it. It's a problem that almost every parent can relate to. Toddlers are by and large picky eaters who have to be tricked into getting their daily nutrients. When Chrissy bared her frustrated mom soul to the Internet, parents everywhere came through with amazing suggestions and strategies and methods for getting the little one to eat. Maybe some of these ideas will help you too.

Look at this precious pair.

They may be the most beautiful people on the planet, but that doesn't mean they don't have the same problems we all have.

On Monday, Teigen tweeted this:

I always came from the mindset of "eat what we serve or go to bed hungry" but I'm officially owned by my toddler, s… https://t.co/4VtmSLsNhg
— chrissy teigen (@chrissy teigen)1545085244.0

She admitted to being "owned" by Luna, who can't seem to agree to eat anything but spaghetti and fish sticks (which, to be fair to Luna, are both delicious).

Teigen even admitted to making a whole menu just so Luna will have something to eat.

This is honestly kind of a good idea, but the whole thing is clearly stressing this mom out, and she deserves not to be stressed.

It looks professional! And if I was Luna, I'd probably take one look at it, chew on the corner of the page, and throw it to the ground. She is two. Luckily, the Internet came to the rescue with a bunch of ideas for Teigen to try.

Hey, here's a great lesson! These picky kids evolve. When she's 20, it won't matter that she wouldn't eat spinach when she was two.

Oh man, it is so true that fun shapes are way more fun to eat. Even if you're an adult.

If you can eat it, you can put it in a quesadilla. And everything tastes better in a tortilla surrounded by melted cheese. This is a foolproof plan by the famous chef, Padma Lakshmi!

If you involve kids in the cooking process, they are more likely to want to eat something that they helped make! Just don't let them make it gross or you won't want to eat it.

It is not worth it to stress out over this. If the doctor tells you not to worry about what your toddler is and isn't eating, listen to her.

Works every time. Just act really elite, like "This dinner is only for grown-ups." Watch how fast your kid shoves that kale in their face.

Jealousy is a really strong emotion, especially when it comes to kids. And parents can use that. After all, your main job is to manipulate their children into doing things that they want.

Look, sometimes it doesn't work. These kids are still alive, they're still going to school and doing things. But if you're 22-years-old and still only eating chicken nuggets, that's too much.

@chrissyteigen Completely normal at her age. They all go through. As a nurse, we tell parents to make sure they are… https://t.co/fjz8G7igrt
— Melanie Jones (@Melanie Jones)1545094226.0

Love this tactic! Don't stress. Let them eat what they want. Trick them into getting nutrients with a gummy vitamin.

Eventually, she'll get sick of eating peanut butter and jelly every night and she'll try out one of the dishes you make. And that will be the end of that.

This is genius! Who can turn away a free sample? No one, that's who.

Mac and cheese and meatballs

Honestly, if I was in a position to demand mac and cheese and meatballs every night, I would. That sounds super delicious.

@chrissyteigen My daughter will eat everything they serve at preschool - chicken Alfredo, Shepard’s pie, a turkey s… https://t.co/0hbuagLf3j
— dana_nichole (@dana_nichole)1545089380.0

Oh, I'm sorry, are you looking for logic in the things that people who are two feet tall and have been on this earth for less than five years do? Yeah, it doesn't exist.

Um, isn't this the only reason anyone ever eats broccoli, adults included? If you're not pretending you're a giant eating green trees, what are you even doing?

Honestly, toddlers are stupid. You can convince them of anything. Call meatloaf chocolate cake. They won't know the difference.

@chrissyteigen My babysitter’s big innovation was using ranch dressing to entice me to eat veggies, and boy did it WORK
— Harry Wood (@Harry Wood)1545106840.0

As a kid, I happened to think ranch dressing was gross, but I agree that this trick would work for most young'uns.

@chrissyteigen Turkey meatballs with grated zucchini and carrots. Let her help you roll them. My granddaughters are… https://t.co/Ct5vZBdZiN
— @dr_zuchs (@@dr_zuchs)1545100235.0

If you grate up veggies, you can hide them in almost anything! Kids won't know they're eating them, and you can be satisfied that you tricked your children.

@chrissyteigen Having them help in the kitchen is a great easy to get them to be more open to new foods. Let Luna p… https://t.co/8KkULNMHWE
— Betsy Agnew (@Betsy Agnew)1545088002.0

This is a great idea! Have the kid pick the recipe so they know that if they don't like it, it's their own dang fault.

"No thank you portion"

I love this! What's the harm in trying something. Just take one bite before you claim not to like something.

Of course, if you don't want to mess with getting a kid to try one bite of something, just claim that they've already tried it and they absolutely love it! They'll believe you! They're kids!

@chrissyteigen Little kids like to dip their food in sauces. They also like different shapes.
— I speak my Mind (@I speak my Mind)1545097671.0

Kids do love sauces. If you look at the video Chrissy took of Luna's menu, sauces are referred to as "dip-dips," and I think that's adorable.

@chrissyteigen I used to grind all the cooked veggies in the food processor and add them to the spaghetti sauce - b… https://t.co/yIEyqzjKla
— jives #nomodofo (@jives #nomodofo)1545086372.0

Oh man, if only most kids would eat something because it has a funny name! Jicama would be a huge hit!

@chrissyteigen My friend's daughter would only eat hot dogs...but she would also eat steak you just had to call it flat hot dogs
— Bridget Calacci (@Bridget Calacci)1545089198.0

This is easy! Just claim that whatever you are serving is their favorite food. Do you love fluffernutters? Oh, salmon is just a pink fluffernutter! Bok choy? Crunchy green fluffernutter.

Hey, it could be worse. Your kid could only eat fast food.

Bribery totally works! I do it on myself all the time. Share this with someone who knows the struggles of feeding a toddler!