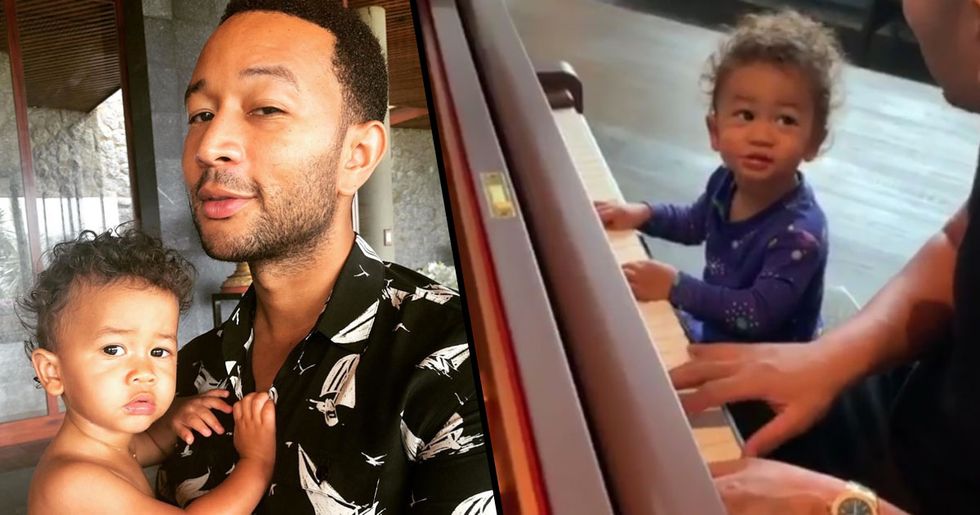 It's no secret that Chrissy Teigen and John Legend are basically relationship goals. And since having their 2 children, Luna and Miles, they've also been crowned as one of the most adorable families in Hollywood.

This is a fact that Teigen seems well aware of, as the star is constantly sharing cute snaps of her children online, much to the delight of her twenty-six million Instagram followers. And the most recent cuteness overload may have just topped the ranks...

The TV personality and model shared a video of her son, Miles, playing the piano with hubby, John Legend and it may just be the sweetest thing we've laid eyes on.

The one-year-old has clearly inherited his dad's musical talent. Keep scrolling to see the adorable video for yourself.

But it wasn't long before Teigen joined her beau on tour. Although the pair had a mini-break up during this time... that lasted a day. “I was on tour with him and he’d gotten sick," Teigen revealed to Cosmopolitan. “He was feeling really bummed and stressed out. He was like, ‘I can’t be in a relationship right now.’ That lasted for one day. Literally, a day. I knew it came from a place other than us not working."

But they (legally) got married in an NYC courthouse, a day before traveling to Italy. "We actually got married after going to a couple of Fashion Week shows at Vera Wang, ironically who actually did my dress, but we got married at the courthouse right after," Teigen explained to E! News. “We are dumb and didn’t realize that our Italian wedding would not be recognized unless we had a real ceremony in New York City. So Irina Shayk was our witness—the most beautiful woman on earth!"

The couple have been candid and open about their fertility problems.

The pair needed the help of IVF to conceive both their children, and, while some couples would buckle under the pressure, the pair persevered through the process together.

Teigen freely spoke about her IVF experience with fans.

After posting an image of her son, who, at the time, was a month old, the star was asked if she’d used IVF to conceive him, as she had for her daughter, Luna, who was 2 at the time of the post. Teigen seemed to have no qualms opening up about IVF, saying, “Yep, he was just on ice a smidge longer, science and the human body are beautiful," and when asked if she was offended by curious fans, she responded by saying that she had no problems discussing how she conceived her children, writing: “I wasn’t offended by it – people are just curious and I think hearing success stories gives people hope. I’m all for talking about IVF."

The star regularly posts snaps of her kids to her Instagram.

And who would blame her for showing them off? They're super adorable.

But Teigen's latest video post has been topping the cuteness ranks...

In a new video that Teigen posted to Instagram, the couple's one-year-old son can be seen showcasing his budding piano skills alongside dad, Legend. Keep scrolling to see the adorable clip.

Although it doesn't seem to just be his looks that he's inherited from Legend, but his musical talent too.

The tot can be seen freestyling on the piano.

And we have to say, his musical ability is probably better than a lot of adults'.

The video, which Teigen captioned "stop everything," shows Miles sitting at the piano next to his dad, who is playing (and singing) "My Favorite Things." While John plays, Miles smiles up at his dad and bangs out a melody of his own.

So, in the words of Teigen herself, "stop everything" and take a look at the video below:

Fans said their hearts were "melting" after viewing the adorable clip.

People flocked to Teigen's comments to gush over the little boy. "Wow cutest thing I've ever seen," wrote one fan.

Celebs were also amongst fans pointing out how sweet Miles is.

Gwenyth Paltrow wrote "Oh my flipping lord," while Kelly Preston said: "Oh my gawd!!!!!!!!!!! I can’t take it!!!!" Vanessa Hudgens also couldn't get over his cuteness, writing: "I can’t stop watching this." Seems like the tot has had quite an effect on people. Want to read more about Chrissy Teigen, John Legend and their adorable kids? Keep scrolling to learn how the internet has crowned Tiegen as the most relatable celebrity mom ever.